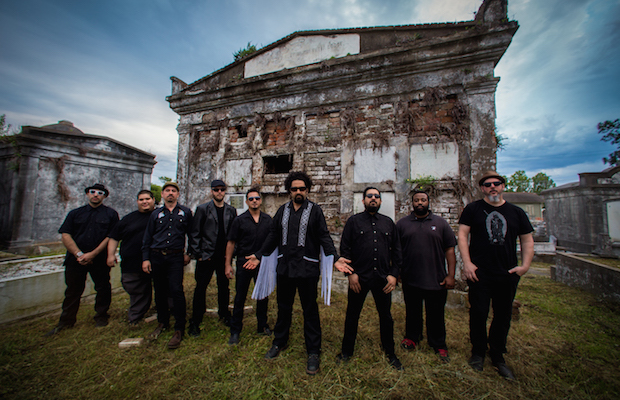 Alone, Brownout are a critically-acclaimed, highly accomplished Austin, Texas based Latin psych-funk outfit, who’ve released three full-lengths of original material, and who have served as the backing band for artists like Prince and GZA. Brownout Presents Brown Sabbath, however, is a unique and conceptual project in of itself, and one the group describe as their “alter-ego.” Brownout played Bonnaroo once previously, in 2012, but this summer marks the Manchester debut of their Brown Sabbath set, something that started as half a joke, when the band began adding Black Sabbath covers into their set during a residency at an Austin club. Met with overwhelming crowd response, they ended up recording a full cover album as Brown Sabbath, and have been touring on its release since last year.

With the help of vocalists David Jimenez and Alex Maas, in addition to Brownout’s own Alex Marrero, Brown Sabbath reimagines the music of the legendary metal pioneers, baking in their own horn-infused, percussion heavy Latin and afro-cuban sensibilities. It’s simply chilling how perfectly the aggression and heaviness of Sabbath still translates into this context, and even the man himself, Ozzy Osbourne, has praised the group’s efforts. More than a gimmick or simply a tribute, Brown Sabbath is entirely fresh experience, and one born out of love, respect, and deep musical understanding of its source material. Bonnaroo is famous for peppering in unique, tribute-type sets each season, and this is one you definitely don’t want to miss.