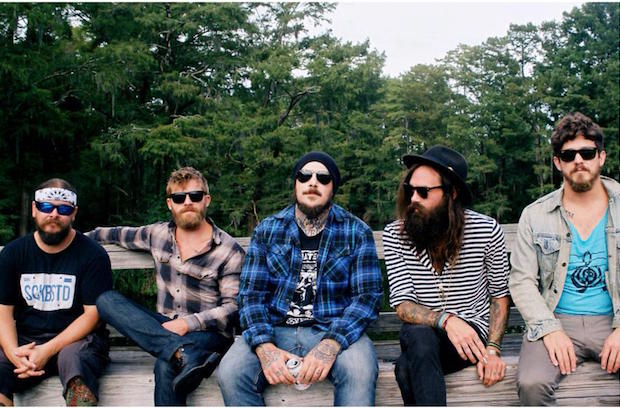 Calling all Music City metal heads: TONIGHT at Exit/In genre bending heavies He Is Legend headline a rowdy show of  ruckus rock. Look for new local alt-metal rockers Foreign War in the middle slot and another Nashville group, We Are The Finale, kicking things off around 8 p.m. The doors for this 18+ show open at 7, so be sure to get there early for the most kick ass Monday option in town. Read on for more info, and if you simply can’t miss out, snag yourself some tickets now for $$15.

Metal and alt rock leaning with tendencies of sludge and stoner metal, North Carolina’s He Is Legend are anything but easy to define. With each release they seem to broaden their sound and appeal, making it impossible to pigeonhole them into one neatly packaged sub-genre . Their most recent record, Heavy Fruit, is the latest chapter in an interesting story. After self-releasing their first EP more than a decade ago (91205), the band soon signed a deal with Solid State Records, and quickly found an audience with their debut full-length, I Am Hollywood. Immediately embraced by the rock community, they would go on to tour and release another two full-lengths before disbanding in 2009 following the departure of several members. Their “indefinite hiatus” didn’t stick, thankfully, and, less than two years later, He Is Legend returned to performing, eventually releasing Heavy Fruit, their first LP in five years, last year via Tragic Hero. A longtime fixture of the scene, He Is Legend’s live show is just as eclectic and aggressive as their back catalogue, and they’re sure to give one rowdy, fun performance this evening.

A new local band who’ve been incubating for just under a year and are ready to explode into the alt-metal scene, Foreign War, will certainly melt your skull. Comprised of members of the band formal known as Red Morning Voyage, FW have just recently begun recording the followup to their debut record This Island Earth. Good news? You don’t have to wait that to hear some of their new material. Get a sneak peak at their heavy rock tinged tunes tonight.

WE ARE THE FINALE

Self described as “chaos pop,” local five-piece We Are The Finale are building a name for themselves in the growing underground metal/alt rock scene, and we look forward to seeing (and hearing) what they are all about. Be sure to get to the show early to get a taste of this talented new rising act.