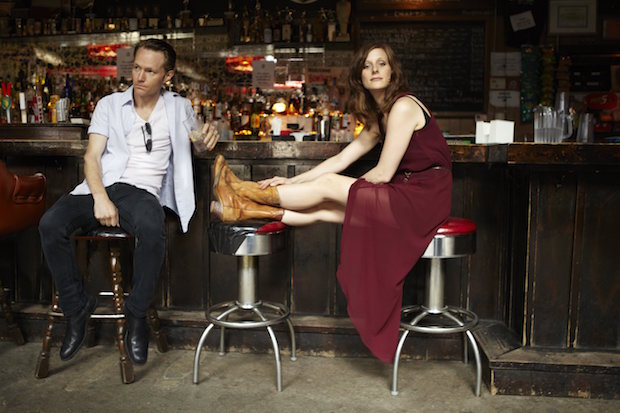 Having formed in 2010, Whitehorse is the product of two incredibly successful musicians in their own individual rights who eventually decided to join forces in life and music. The husband and wife folk duo of Luke Doucet and Melissa McClelland pride themselves on being the only ones to play the music on their albums, and on stage they are known for having an impressive presence and impact on fans. Their most recent LP, Leave No Bridge Unburned marks a few major steps for Whitehorse – the two finally decided to bring a third party into the mix in the form of producer Gus Van Go. Van Go, and collaborator Werner F, worked with Doucet and McClelland to build an album that was branching out of Whitehorse’s comfort zone. Experimental, inspirational, and captivating, Leave No Bridge Unburned is a love letter from the band to their fans, to each other, and to music itself.

“Walking Man Walks” is how the band is described on their website, and those three words say more than an entire paragraph could. What can one do but move forward, those words seem to say. A walking man walks, simply put and simply done, similarly to how the musical duo of Walking Man simply plays music. What else will Walking Man do but play their folk/blues/indie for their fans? Mick and Draper, the two band members, do exactly that. The duo’s most recent musical works are available for a free download here or you can hear one of their songs below.

Illinois native Miles Nielsen has been writing songs ever since he can remember to the point where he has mastered the art of it. But to Nielsen, it’s not about making sure his songs are perfect. It’s about playing music that fuels the mind, heart and soul.Every look, every breath, every word spoken – they are all opportunities to write a song in Nielsen’s eyes. He seizes all of these moments with excitement in order to create a storybook-like musical world that anyone can relate to. Every song and subsequently every record made by Miles Nielsen is a chance for people to get a look into the world he has created through music. With his five-man band, The Rusted Hearts, on board, Miles Nielsen is out to share his music with the world.

Indie/rock artist Jadea Kelly is known as “a Canadian jewel.” Hailing from Toronto, the musician has little ways of giving insight into her sense of humor and fun, bubbly personality. Her website’s name? “DarthJadea.com.” After taking some time to rest, grow a garden, and truly find peace and solace for her heart and soul, Jadea Kelly is setting out on the road again with Wildhorse for a few dates. But when this fun musician decides to get her career moving, she doesn’t do it half-heartedly. She puts her all into it and flies at full throttle. In the last three years, Jadea Kelly has completed two cross-country Canada tours, two tours of Eastern Canada, a tour of Germany and the Netherlands, and was featured on CBC Radio 2’s Canada Live. Most recently, Jadea Kelly released a full-length album titled Clover. Below is the official music video for one of the songs off of the album, “Wild West Rain.”

Walking Man, Whitehorse, Miles Nielsen, and Jadea Kelly will perform on March 12th at The Basement. The show is 21+, begins at 9PM and tickets are available for $5 at the door.