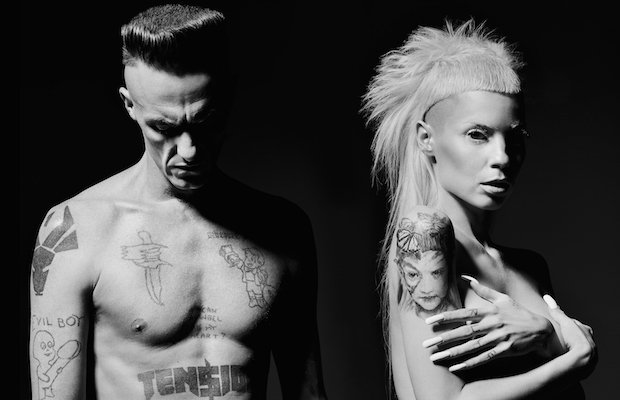 We hope you bought your tickets to see Die Antwoord at Marathon Music Works on March 20 when we announced the show back in January, because it’s now totally SOLD OUT! This comes as no surprise, since the South African shock rap group are currently starring in a Hollywood film (Chappie) and riding high on the release of their crazy 2014 album, Donker Mag. Live, Die Antwoord are a wild, unpredictable, and manic experience, and, because we’re such big fans, we want to send one lucky person to their sold out show! Read on for details, and enter for a chance to win a pair of tickets below!

Die Antwoord (pronounced “Dee Ahnt-Voord,” and translated as “The Answer” from Afrikaans if you’re curious) are, by all measures, one of the most unique artists in the world. Based in Cape Town, South Africa, the group draw their intense, exaggerated, and often shocking image from the regional “zef” counter-culture, which, essentially, is the “anti-posh,” a “poor but still fancy” attitude. Channeling elements of hip hop, alternative rap, and electronic music, Die Antwoord consist of two MCs and a (often uncredited) DJ, Hi-Tek, rap in multiple languages, and deliver socially-charged, shocking, and intensely fun cuts on their three full-length releases. Known for their edgy and intense music videos, rappers Ninja and Yolandai Vi$$er are also making their large-scale Hollywood debut this week, starring as exaggerated versions of themselves is new Neill Blomkamp film Chappie. Their live show is a spectacle to behold, and one lucky winner will get to soak it up firsthand.

Enter to win tickets by filling out the form below. Must be 18+ to attend, per the show’s age requirements. After you have entered, there will be the option to share this contest via social media. For each person that you refer to the contest, you will receive an additional entry. If you experience any trouble with the contest widget, or have any questions, feel free to email us at [email protected]le.com.

Winner will be announced Wednesday, March 19 at 12 p.m. CST, and will receive one pair of tickets. Good luck!