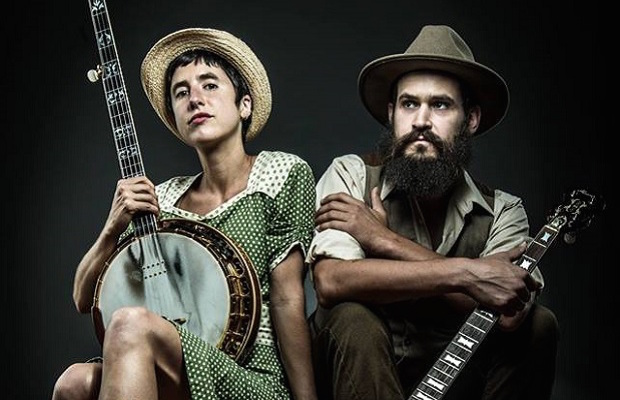 I’d been planning to catch a show at Bobby’s Idle Hour for some time, but kept not making it for one reason or another.  So, when I heard that The Lowest Pair would be stopping by in between opening for Trampled for Turtles at the Ryman and heading to SXSW, I resolved that I would not miss this opportunity.

Keep reading to hear about their show, as well as some other pleasant surprises.

Since I hadn’t been to an actual show at Bobby’s Idle Hour, I reached out to The Lowest Pair’s publicist to confirm their set time and cover, if any. The website indicated Hal Spangler’s Bluegrass Babes started at 8PM. so I arrived some time between then and the duo’s 9:30 set.  I grabbed a partially obstructed view seat at the bar and a $3 Shiner, and settled in to listen to a great trio led by Megan Saunders on banjo, about halfway through their set. I quickly learned that the night’s show was in support of the Banjo Babes CD and Calendar. Seriously, check it out here.  Next up was Erin Inglish, who is the organizer of the project and definitely a free spirit.  Erin came out solo with her banjo, and advised that she had gone to Berkeley (California, not the music school).  Apparently, she said the banjo found her and she gave up that whole 9-5 (likely better paying) engineering career.  Her set included a cool singalong of Paul Simon’s “Diamonds On the Souls of Her Shoes”.

After a short break, Erin introduced The Lowest Pair, who are “new old timey” banjo duo Kendl Winter and Parker T. Lee.  Apparently, Kendl has been part of the Banjo Babes project for a while, which I assume was the connection to tonight’s show.  It was also the same day as the release of their new CD, The Sacred Heart Sessions.  A bit surprisingly, they kicked off their set with a couple songs that are not on the new CD, but I recognized a few of the new ones including “Rosie” right away.  The combination of two banjos, interesting vocals, and great songwriting has resulted in something very unique that appears to be really taking off.  Based on my brief conversation with Parker, it sounds like they have been quite the road warriors, driving their small car across the country, including a recent stop in KC for Folk Fest.

I bumped into a local musician friend who told me he was playing the late night show with Susie Monick, so I stuck around for a few songs. I counted Dan on bass, two guitarists, two drummers, one on keyboards, and a horn player in addition to Susie (on vocals, banjo, mandolin and accordion).  I definitely need to come back soon for their full set.

If you’ve never been to Bobby’s Idle Hour, I highly recommend stopping by for a visit.   I was tempted to order something from the menu; however, a “pot luck” was set up with several pots of homemade chili, vegetables, chips, and cookies, etc., which just added to the atmosphere. I wondered if they may have lost their “dive bar” designation since going non-smoking at the first the year, but decided not based upon the cold beer, good music, and friendly crowd.  I may have a new favorite local hang.