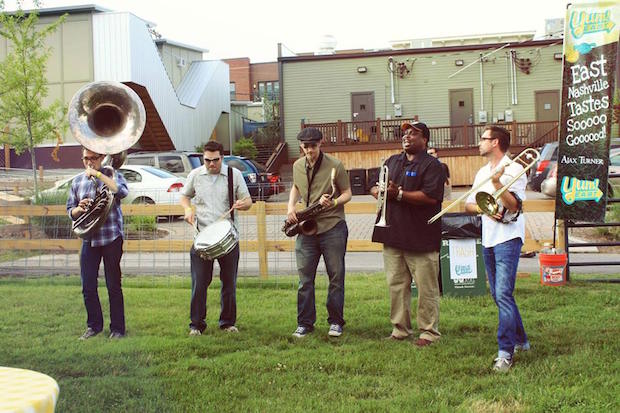 [UPDATE: Due to severe weather, this show has unfortunately been canceled. Sorry guys!]

Founded around 2003, in the style of classic New Orleans brass bands, locals Halfbrass always bring the party. They’ve traveled all over the country spreading their vibe, and members have recorded with artists like Big Bad Voodoo Daddy, Charlie Peacock and Old Union, to name a few.  Their live shows get everybody moving and shaking, and we can’t wait for them to help us get in the Mardi Gras mood with their funk flavored horns. Have a taste below and make sure you get there on time to enjoy their whole set.

Local indie rock darlings (and no strangers to No Country coverage) Sol Cat were one of the special guests we mentioned when we first announced this show, and, after their killer Friday the 13th show at 3rd Lindsley with Black Cadillacs, we couldn’t wait to update everyone on their appearance in our showcase. Kick the winter blues, and live it up with one of our favorite local acts, tonight!

Local, via Muscle Shoals, AL, indie singer songwriter Firekid is signed to Atlantic Records and making a name for himself near and afar. Get hip to him now, because he seems poised to explode, and will likely be spending a ton of time on the road in the near future.