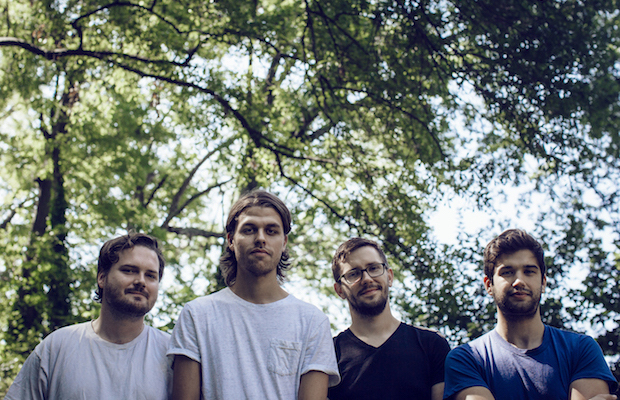 If you’re looking for a night of rock music, you, my friend, have found it. The Basement is known for showcasing all different types of musical performances, but tonight will be a rock-based evening with White Violet, Semicircle and Nashville’s own Sudonistas. With all three groups having released albums in mid-to-late 2014, they’re eager to showcase their new material to the good folks of Nashville, Tennessee.

Atlanta-based rock group White Violet has quite a bit to be proud of. Their sophomore album, Stay Lost, is a labor of blood, sweat and tears. The band agreed to immerse themselves in their music for the weeks that they recorded – meaning no jobs to report to, no bar hopping with friends, no going home to significant others. It was just the artists and their artwork. With that sort of dedication, you can expect great things, and White Violet is proud of the masterpiece they’ve created (as they should be). Now on tour, Nashville is just one of many stops they will be making along the east coast – but this will be the only time this tour that they’ll be in Music City, so you may want to get over to The Basement for your chance to see them live.

Duo Andrew McFarland and Ryan Engelberger are the founding members of Semicircle, a self-described “indie folk/freak folk/folk rock” group out of Atlanta, Georgia. Originally hailing from Athens, the two artists made the move to the big city in 2012 in order to complete their debut full-length album Blown Breeze, Grown Grass and We are Part of the Earth. Released in December of 2014, Semicircle is now out on tour to promote their completed album.

Sudonistas are the Music City natives on tonight’s bill, and they don’t waste any time trying to describe themselves on their Facebook page. In fact, they simply encourage you to go listen to their music in the belief that this is all you really need to know about them, which is perhaps one of the most beautifully simplistic explanations for a band bio. So have a listen to them below, and then head on over to The Basement to hear them in person.

White Violet, Semicircle, and Sudonistas will perform tonight, Jan. 28 at The Basement. The show is 21+, begins at 9 p.m., and tickets are available for $5 at the door.