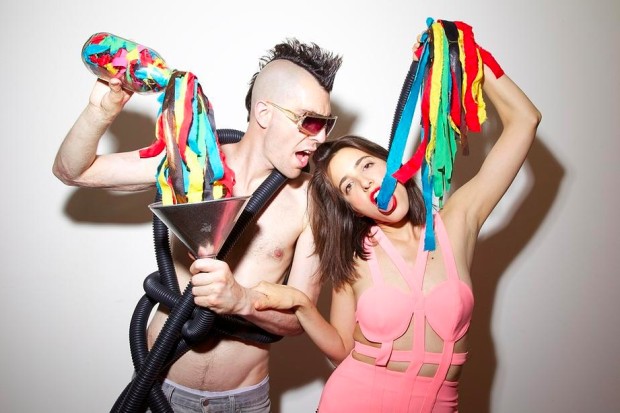 The Brooklyn-based pop duo Hank & Cupcakes are touring to celebrate the release of their new record Ca$h 4 Gold, and are making a stop at The High Watt tonight with locals Stereosparks and The Trinity Schill Kill. Hank & Cupcakes are a guy-girl duo who combine electronic pop with alternative influences. Stereosparks and The Trinity Schill Kill are two local acts that can be categorized as dance-pop, but come from opposite ends of the polished-gritty spectrum. If you’re in the mood to put on your dancing shoes and shake off the winter blues with some electronic pop, this is the show to be at.

Hank & Cupcakes take their name from the literature of Bukowski, who went by the nickname Hank and referred to his lovers as Cupcakes. The duo recently broke away from a major label contract in order to cut their new album completely independently. The electro pop male-female duo are influenced by the rough alternative rock of the Yeah Yeah Yeahs and the Kills. Hank plays the bass with a massive pedal board while frontwoman Cupcakes sings and drums.

Nashville-based pop-rock band Stereosparks recently completed their first EP The Secret with Grammy-winning producer Chad Carlson. Lead by charismatic frontwoman Storey Condos, the band has gained comparisons to Imogen Heap, and is amassing a growing following in here in Music City. Judging by their first single, which you can listen to below, the band certainly sound pop radio ready.

The Trinity Schill Kill are a local electronic duo inspired by Prince, Daft Punk, and Michael Jackson. That last influence especially comes out in their dance moves, which, if you’ve seen them before, you know can be infectious.