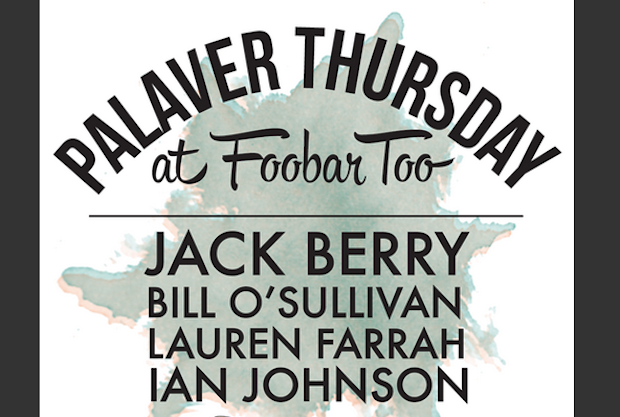 The nation is gearing up for a three day weekend (Happy Birthday, MLK Jr.), and what better way than to pre-game for said weekend by heading out to FooBAR Too? $3 beers are waiting to greet you, and while Palaver Thursdays usually only have three bands, tonight is special – four bands are on the lineup, including blues rocker Jack Berry, singer/songwriter Bill O’Sullivan, ‘heartfelt, badass’ rock and roller Lauren Farrah, and folk/ambient/rock artist Ian Johnson. Basically, there is something for every kind of music lover – and for just $5, it’s a damn great night ahead.

Out of Reno, Nevada comes whiskey drinking, rock and roll loving Jack Berry and his bandmates, Loaded Loot, all the way to Nashville. This artist’s performances have been described as “wild” in the past, and with a resumé of sold out shows along the west coast it’s about time he brought his talent to the east side of the states. In addition to his antics on stage, this rock and roller’s debut CD Heathen Heart placed second on Blues Rock Review’s Album of the Year 2013. It’s been stated that Jack Berry combines “soulful church hymns” with “booze-induced bar brawls,” and if that doesn’t make for an entertaining, wild night, we’re not quite sure what does.

Bill O’Sullivan has quite a bit on his plate: in addition to touring out from Brooklyn, New York as a singer/songwriter, the talented musician also leads heavy rock group Eggnog. Working as both a solo artist and part of a band allows the 24 year old to fuel his passion for all kinds of music, such as blues, folk and rock. His debut album, Phillip’s Head, was released back in 2011, just two short years after first making the move to the Big Apple. Now, we’re thrilled to welcome him as a guest into Music City for tonight‘s epic show.

Indie artist Lauren Farrah calls Nashville, Tennessee her home and has an exciting year ahead. 2015 is going to be kicked off for the artist by the release of her latest album, Champion of the Bad Luck Blues. Backed by a band of three loyal musicians, Lauren Farrah is a firecracker who never just does anything halfway or with muted excitement. This artist doesn’t just want to connect people to music – she is “hell-bent” on doing it, which means it’s going to happen one way or another.

This rock and roll/folk/ambient artist is another Nashville transplant from the west coast with a lot to look forward to in 2015 – a full length album is in the works (release date TBD). In the meantime, he’s making sure to consistently update his fans on his progress while also making it a mission to bring his music to your ears personally.

Jack Berry, Bill O’Sullivan, Lauren Farrah and Ian Johnson will perform on Jan. 15th at FooBAR Too. The show is 21+, begins at 9:00PM, and tickets are available for $5 at the door.