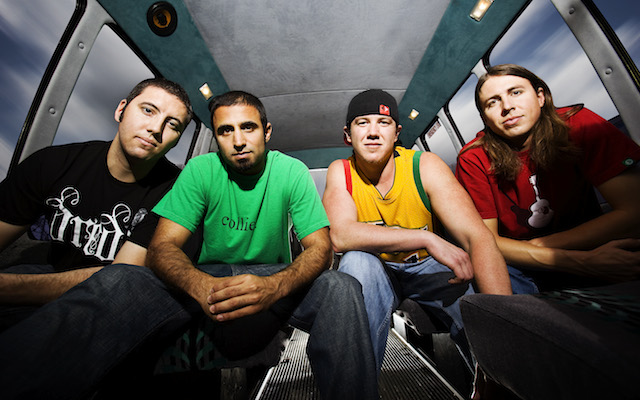 This winter may be bitterly cold, but that means there’s no better time to get down to some summery reggae vibes. Fortunately for you readers, that’s a goal we’d like to help out with by offering up a free pair of tickets to the upcoming Rebelution show. This event also features New Zealand reggae masters Katchafire and local favorites Roots of a Rebellion as openers. The whole shebang goes down at 9 pm (doors at 8 pm) at Marathon Music Works on Thursday, January 29th. Very exciting, yes?

While you can already purchase tickets via this link, why not try your luck at winning the free pair of tickets through our contest giveaway widget after the jump? Remember, you can earn bonus entries by sharing a unique URL on your social media feeds after you enter!

It’s been a long eleven years since California four-piece (five on tour) Rebelution began playing together, but the group has achieved more success than almost any other reggae act in existence. Besides playing dozens of festival main stages across the globe and recording new records, the group plays as much as 115 shows per year. Moreover, they’ve topped the Billboard Reggae charts numerous times and even cracked the general Billboard 200’s Top 20 on a handful of occasions. Despite all this, Rebelution still gives off the impression of being a bunch of regular guys who just happen to be really, really great reggae players. This fact alone goes a long way towards explaining Rebelution’s success. Even if you ignore the accolades, tour history, the album sales, and the hype, you’ve still got a tight group of friends that like to spend their time playing funky reggae tracks, and by god have they gotten good at that.

Katchafire early on established themselves as “New Zealand’s hardest touring band.” This seven piece act began back in 2000 as a Bob Marley tribute band, but soon moved on to playing original tunes. Overall, that seems to have been a brilliant career move, as the group’s original music would prove to be enormously successful in their homeland. In fact, both of their last two releases managed to climb to number 3 on the New Zealand Recorded Music charts. Outside of New Zealand, pockets of Katchafire fans exist across the globe, most notably in Australia, the UK, and here in the States. Much like Rebelution, Katchafire makes a habit of constant touring, which has allowed them to really hone in their skills. Expect a tight show with some really satisfying grooves from these guys.

Though Roots of a Rebellion (whom most fans refer to simply as ROAR) is the youngest band on the bill, this local group definitely has their act together.  Since graduating from the Belmont University music crowd a few years back, ROAR has become a favorite up-and-comer in the national reggae scene. The group has scored several festival slots and played shows all across the country, due mostly to their penchant for putting on fantastic tunes and an engaging live show. We’ve always enjoyed catching these guy’s performances around town, and this one definitely won’t be one to miss.

Per the show’s age restriction, you must be 18 years or older to enter.  Enter to win tickets by filling out the form below. After you have entered, there will be the option to share this contest via social media. For each person that you refer to the contest, you will receive an additional entry. If you experience any trouble with the contest widget, or have any questions, feel free to email us at [email protected].

Winner will be announced Wednesday, Jan. 28 at 12 p.m. CST, and will receive one pair of tickets. Good luck!

Rebelution, Katchafire, and Roots of a Rebellion will perform 1/29 at Marathon Music Works. The show is 18+, begins at at 9 pm (doors at 8 pm), and tickets are available to purchase for $22.50.