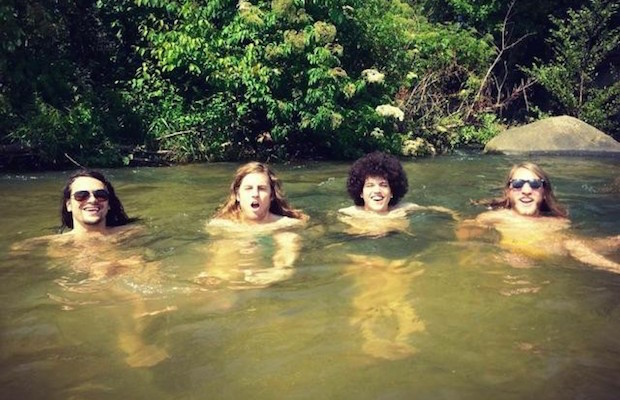 Christmas isn’t quite here yet, so there’s still time to get some rock ’n’ roll in before yuletide, fruitcakes, presents and family gatherings start dominating your time. We suggest you catch the Athens, GA formed, fully submerged psych rock sounds of New Madrid, local post-punksters Western Medication, and fellow resident grunge/psych rockers The Wild Jays … all playing TONIGHT at The Stone Fox. You get all this great tunage for just $8 at the door but you must be 18 + to enter. Be there when the doors open at 8 (show starts at 9 p.m.). Also, make sure you click on after the jump for more info on the bands, and a sample of their sounds.

Getting their start in 2012, the sludge psych-rock quartet known as New Madrid self-released their debut album, Yardboat, which was engineered by David Barbe. Mr. Barbe has worked with other bands we also dig very much, like Deerhunter and the Drive-By Truckers, so, when we heard he had new band in-tow, we knew we had to check them out, and we are so glad we did. Following up their debut, which got a lot of people in the college-radio-rock world talking, they signed with hometown Athens, GA indie label Normaltown records, and dropped Sunswimmer last February. Once again, D Barbe had a hand in, much to our ears’ delight. The band have been relentlessly touring throughout 2014, and are winding down their cycle as they make their way through the southeast. Be sure to see them now, at a small venue, because we think they are poised to start playing much larger shows in the not too distant future. You can hear why below.

Their lineup has shifted on occasion, so we’re interested to see exactly who shows up to play this gig under the moniker Western Medication. Currently listed as on their FB page as Justin, Callan, Austin and Devin. The one thing we are certain of (based on their EPs) is they rock. Have a taste below.

A new band you can get hip to before all your hipster friends, The Wild Jays haven’t be around long, but they’ve managed to make a fair amount of noise, channeling grunge, psych, experimental rock and even some funk. We look forward to checking them out, and you should too, after you hear this.

New Madrid, Western Medication, and The Wild Jays will perform TONIGHT at The Stone Fox. The show is 18 +, begins at at 9 p.m. (doors at 8 p.m.), and tickets are available for $8 at the door.