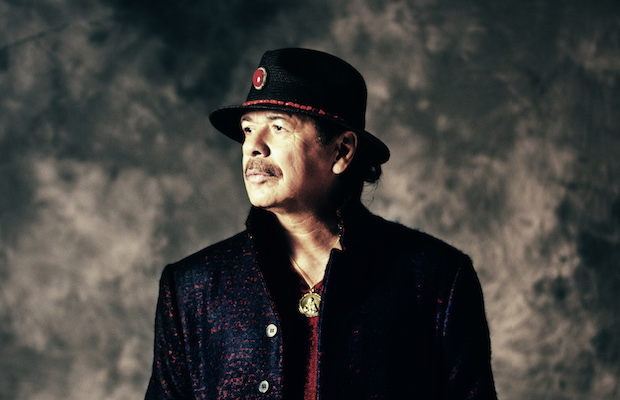 Santana’s sold out concert at the Ryman in April was one of Nashville’s top shows in 2014. If you missed it or if you just didn’t (can’t) get enough, Carlos Santana will be returning to The Ryman Auditorium on Wednesday, March 11 at 7:30 PM. Ticket prices range from range from $85 to $350 (plus applicable service charges) and they go on sale TODAY (12/12) at noon.

The initial band, the Santana Blues Band, was formed in 1966 but the name was shortened to just Santana by the time they played Woodstock in 1969. Their first two albums produced several top hits including “Evil Ways”, “Black Magic Woman, and “Oye Como Va”. The band and the sound have gone through a lot of changes over the past 40 years but remain distinctive and relevant. Santana (the man and the band) was inducted into the Rock and Roll Hall of Fame in 1998. Around that time, Clive Davis brought Carlos over to Arista Records and suggested he make a record with some younger artists. The result was 1999’s Supernatural, which included Rob Thomas, Wyclef Jean, Lauryn Hill, Eric Clapton, and Dave Matthews, among others. It sold over 15 million copies and the single “Smooth” topped the charts for 12 weeks. The album won a record-tying nine Grammys for a single project.  Carlos Santana was named by Rolling Stone as #15 on their list of the “100 Greatest Guitarists of All Time” and was the recipient of the Kennedy Center Honors Award in 2013. Santana is one of only two music acts to score at least one Top Ten album for six consecutive decades. His non-music endeavors include charitable work through his Milagro Foundation, a chain of upscale restaurants called Maria Maria, and other product lines.