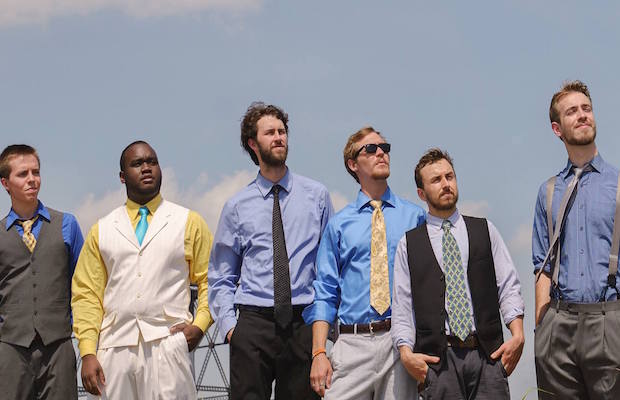 By now we hope you’ve heard, our live events production wing, No Country Presents, has taken up residence at Lower Broadway’s hippest new restaurant, lounge, retail, and event space, Acme Feed & Seed, where we’ve been bringing you a weekly, FREE, Tuesday night showcase, featuring some of our favorite emerging local and national talent. The curated showcase runs from 7:30 to 10:30 p.m. each week, and, so far, has featured everything from folk to funk to rock to indie. For our next installment, on Tuesday, Dec. 9, we’re bringing you an exciting double bill of local funk/jam act The Aquaducks and pop/rock group The Alarms. Keep reading to find out all about them, and cancel any other plans you might have Tuesday night, because you’re coming to hang with us. Got it?

Blending elements of funk, soul, and r&b, and funneling them into a style that draws from rock and modern jam bands, The Aquaducks have become one of Nashville’s fastest growing, most buzzed about acts. The sextet first garnered attention after winning the Belmont Battle of the Bands in 2012, and, in the years since, have scored spots on countless local and regional fests. Boasting sharp instrumentation, funky, groove-laden compositions, and a whole lot of live energy, The Aquaducks seem to get better and better with each new release, and their brand new live video for “Dig” (below), provides us with an exciting taste of great things to come!

Formerly billed as “Robert Gay and the Alarms,” and, now, simply The Alarms, this local trio (still fronted by Gay, and currently seeking a fourth member, apparently) have been on our radar for quite awhile. Channeling an emotionally charged, relatable, and nostalgic flavor of rock and roll, the group excel at crafting poppy, unforgettable hooks, and wearing their retro influences on their sleeves, while wrapping them up in a modern delivery. The Alarms bring a very different approach to this bill than The Aquaducks, and should help make for one well-rounded, eclectic showcase of some of Nashville’s strongest talent.

The Aquaducks and The Alarms will perform Tuesday, Dec. 9, at Acme Feed & Seed. The show is 21+, music begins at 7:30 p.m., and, per usual, it’s totally FREE. Downtown PARKING can sometimes be an issue. However, if you’re willing to walk a few blocks, street parking is typically easy to find on the numbered avenues south of Broadway, or along Korean Veterans Blvd. Metered spaces are often free after 6 p.m.