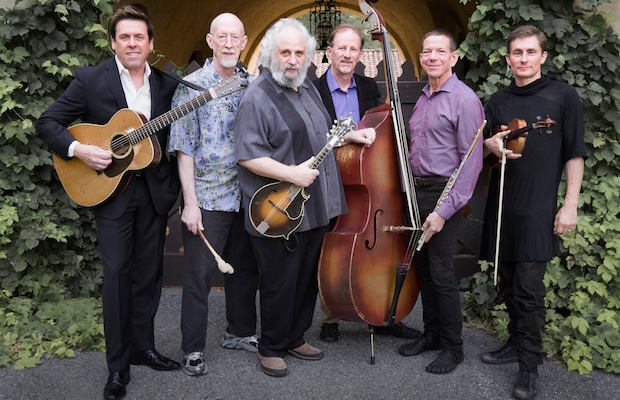 David Grisman had not played Nashville for a long time so it was a big deal when it was announced the David Grisman Sextet would be playing two nights at the City Winery.

I had never seen Grisman live before, so I wasn’t going to miss this opportunity. Keep reading to find out what we thought.

Based upon our experience, there is not a bad seat in the house at City Winery. That said, our seats for the David Grisman Sextet’s show last Friday night were the best we’ve had yet…maybe, six seats from the stage.  Talk about great timing.   It was a good crowd but didn’t appear to be sold out.  We shared our table with a couple visiting from New York, who were very surprised to score such good seats, adding that wouldn’t happen back home.

One of several other things we love about City Winery is that the shows are earlier than most around town and start on time. The sharp dressed band took the stage promptly at 8PM and was soon joined by David Grisman in a casual floral shirt with mandolin in hand.  They quickly launched into “EMD”, which was one of the few song names I even bothered to remember.  After that, I was simply mesmerized by the entire experience.  Grisman introduced his stellar band beginning with bassist Jim Kerwin and flutist Matt Eakle, who have been with him for 30 and 25 years, respectively.  Percussionist George Marsh is in the tenth year of his second tour.  Rounding out the sextet were guitarist George Cole and violinist Chad Manning.

David Grisman is recognized as an acoustic pioneer and innovator combining many musical styles and genres to create “Dawg” music, from the nickname given him by Jerry Garcia. Is it bluegrass or newgrass or jazz or what?  Does it really matter?  It was a great evening of music performed by musicians who were totally in sync. Playing together for as long as the core of the band has done certainly helps, but you could also see Grisman subtlety directing the show.  You could hardly call it a solo when one member was being featured as the rest of the band was right there with him.  It was especially great when flutist Matt Eakle was front and center…he seemed to be enjoying himself as much as anyone in the room.  The sextet became a septet when fiddler Jimmy Buchanan, who toured with George Jones and played with countless others,  joined the band.

The list of names that Grisman mentioned during the show was as varied as it was impressive ranging from Bill Monroe and Doc Watson to Tony Rice to Vassar Clements and Stephane Grappelli with not a hint of “name dropping” as there are hundreds more.  The only thing to do after a show like this is to run out a get as much David Grisman music as you can find…and afford.