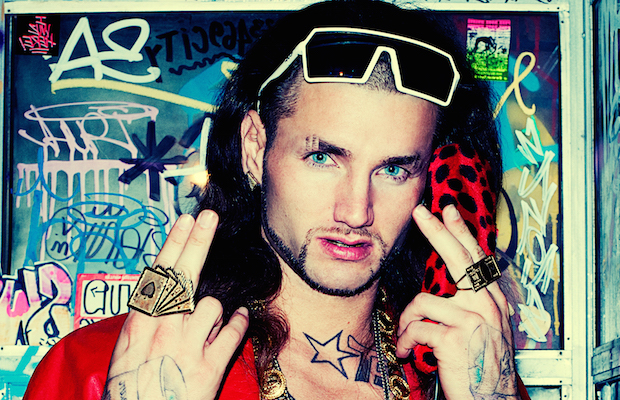 As we told you a couple of weeks ago, larger than life rapper on the rise Riff Raff is set to return to Nashville tonight, Nov. 22, for a headlining performance at Anthem! Riff was just here over the summer, where he performed as part of the Diplo-curated Mad Decent Block Party tour (Diplo also serves as something of a producer/mentor to Riff Raff, and signed him to his Mad Decent label), but, if that short set wasn’t enough, or you’re looking for the full-on Riff Raff experience, tonight’s late show, which also includes electronic artists heRobust and Manic Focus, is definitely going to be one of the weekend’s best parties. Grab your tickets here, and read more about the lineup below!

Love him or hate him, there’s no denying that Texas rapper Riff Raff, a.k.a. Jody Highroller, is one of a kind. The self-proclaimed “neon icon” (also the name of his latest album) has been amassing an underground following for the last several years, and rose to further mainstream recognition when he famously (or controversially) served as the inspiration for James Franco’s character in 2013 Harmony Korine film Spring Breakers. With a killer new album, elevated presence, and co-signs from many of his peers, there’s never been a better time to jump onto the Riff Raff bandwagon, and the ’90s loving, codeine sipping MC’s latest video, an ode to J’s called “Tip Toe Wing in My Jawwdanz,” is a perfect jumping off point. Watch it below, and be sure to show up tonight for one hell of a weird, wild performance!

Hailing from Atlanta, Hayden Kramer, better known as heRobust, has quickly made a splash in the EDM circuit, boasting an impressive array of remix tracks, collaborations, and explosive originals. Having shared the stage with heavy hitters like Skrillex, Bassnectar, and Pretty Lights, Kramer has managed to carve out his own niche, pulling from dubstep, electronica, and other bass heavy subsets, while maintaining a fiercely beat driven and hypnotic original sound.

The fact that John “JmaC” McCarten, a.k.a. Manic Focus, has also been tapped to support Riff Raff should give you a pretty good indication of Riff’s audience: a smattering of hip hop fans, ravers, and old school EDM fans, all of whom overlap in a love for overblown and nostalgic rap. With his layered, boarding on trace-like, knack for crafting sweeping and dense compositions, Manic Focus will serve as a nice, comparatively calm way to get the night warmed up.