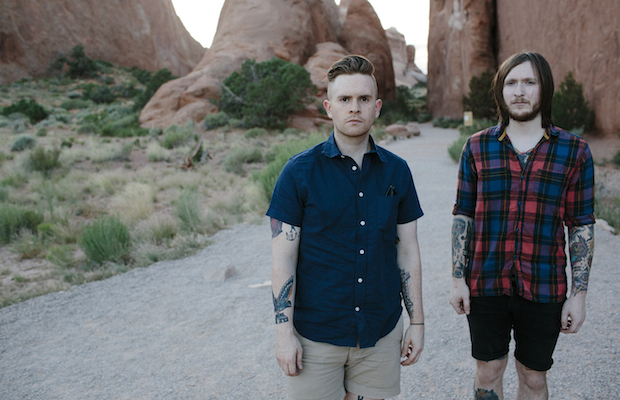 We’ve spoken at length about the new wave of emo and pop punk bands that have been brewing at the underground level, and about how much fresh life and relevance they’ve been bringing to the scene. No group better exemplifies this movement than Michigan (by way of New Jersey) duo Dads. Fiercely beloved but still thoroughly underground at the broader level, Dads are a band you should absolutely know if you’re a fan of quality indie rock and emo, and their new album, I’ll Be the Tornado, is their best yet! Joining Dads tonight in Nashville for a show at The End are Tiny Moving Parts, Choir Vandals, and The Star Killers, making for a stacked lineup and a hell of a $10 deal to finish your weekend out right!

Perhaps lesser buzzed about than some of their peers, Dads are, nonetheless, one of the most fiercely beloved emo/indie revivalist acts, channeling a noodle-y, lofi, melodically dense, and emotionally resonant sound that has helped cement their debut LP, American Radass (This Is Important) and followup EP, Pretty Good, as instant, under the radar classics. The group released a new album, I’ll Be the Tornado, last month via 6131 Records, and it showcases an even greater leap in artist growth and musical cohesiveness. Come see Dads showcase new tunes and perform old favorites tonight!

Also hailing from the midwest, Tiny Moving Parts take direct and welcome influence from that region’s emo heritage, crafting a noodle-y, dynamic, and rhythmically driven sound which, like Dads, leans heavily on its emotional core, allowing lyrics and themes to drive their relatable compositions.

Continuing the evening’s midwest theme, St. Louis based Choir Vandals are also on 6131 records, and conjure a somewhat more subdued, straightforward and alt-rock derived sound than their tour mates. They’re far from out of place, however, taking cues from punk and indie rock, and exerting an expert ability to let dynamics and melody guide their songwriting.

Tapped to open the show, local(ish) rockers The Star Killers call Memphis home, and have a decidedly more indie rock sound, though not without poppier and more punk tinged and genre-bending tendencies.

Dads, Tiny Moving Parts, Choir Vandals, and The Star Killers will perform Sunday, Nov. 23 at The End. The show is 18+, begins at 7 p.m., and tickets are available for $10.