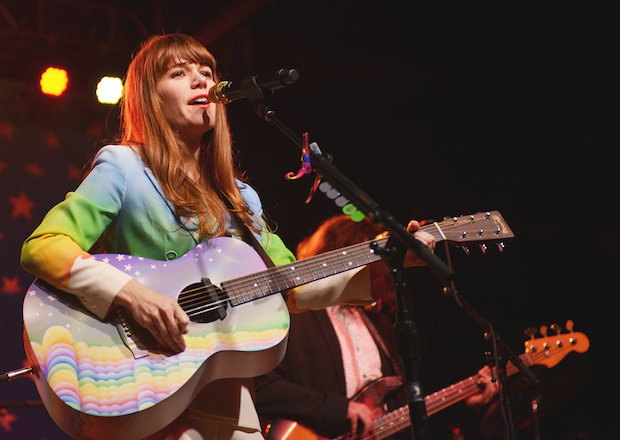 We first fell in love with the pleasantly poppy, west coast indie rock stylings of Jenny Lewis more than a decade ago in her days with Rilo Kiley, then, a few years later, got a taste of her versatility with cult classic side project The Postal Service. Throughout the late ’00s, Lewis has not only further pushed her artistic boundaries as a formidable collaborator (with The Watson Twins and in Jenny & Johnny, with boyfriend Johnathan Rice) but has proven to us that she shines brightest as a solo artist. In 2008, Lewis put out her astounding proper solo debut Acid Tongue, and, earlier this year, finally, delivered a long-awaited followup, The Voyager. One of our absolute favorite albums of 2014, The Voyager has not left our playlists since, and we were delighted to see Jenny perform much of it over the summer at Forecastle Festival in Louisville. However, outside and in the heat of the day, festival performances aren’t an accurate representation of an artist’s true, fully-controlled live show, so, naturally, we were counting down the days until we could see the full Voyager experience at Marathon Music Works. Lewis exceeded our every expectation over the weekend, and, not only did tourmate Waxahatchee make for an even more memorable night, but we were treated to a special secret pre-show performance at a bar. Read on for our full review and check out some pictures from the spectacular show! 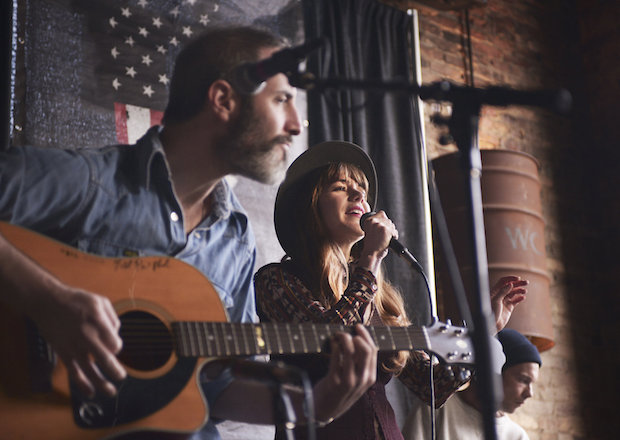 Secret shows are something our friends at Lightning 100 have been hosting for quite some time now. Put on for a small group of fans and contest winners, it’s a way for larger touring artists to perform in much more intimate spaces than they typically ever get to, and a fun and informal way for a lucky group of winners to take in an extra special show. Though I’ve been aware of these special events for quite awhile, Jenny Lewis’s secret show was the first time I’ve had a chance to attend one. Hosted at Marathon-connected bar William Collier’s, the afternoon event was absolutely packed, and, when I arrived, everyone was abuzz waiting for a glimpse of Jenny and her bandmates. Crammed into the corner, the group took the “stage” after a brief introduction, and proceeded to perform three tracks from The Voyager, “Just One of the Guys,” “She’s Not Me,” and title track “The Voyager,” as well as Rilo Kiley tune “With Arms Outstretched,” all semi-acoustic and on stripped down instruments. While, without a proper stage, catching a good view was a bit of a challenge, the sound was raw and incredible, and, while the special event was all too brief, it left me even more anxious for the evening’s main event. I would definitely recommend paying attention to Lightning 100 on social media and tuning into their broadcast for news on secret shows in the future; they’re a pretty once in a lifetime experience! 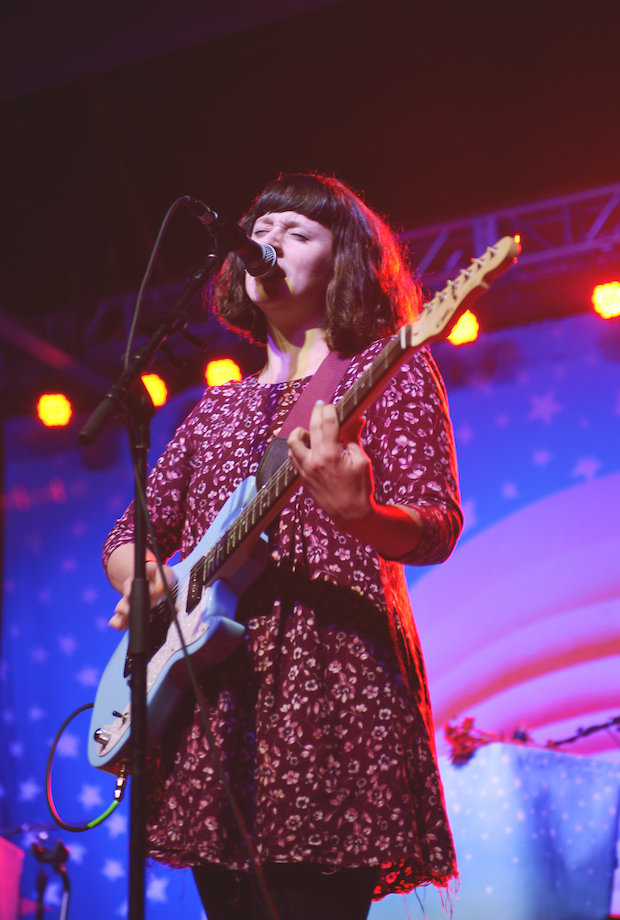 A few hours later, and with a belly full of food and drinks from Rolf and Daughters, I arrived back at Marathon Music Works, early for once, to grab my spot in the front and wait. I was surprised to see such a sparse crowd ahead of showtime, but, hey, it’s Nashville on the weekend; things would soon start to fill up. While I’ve been hearing buzz about Waxahatchee, a project which more or less centers around singer-songwriter Katie Crutchfield, for quite some time now, and have given both of her critically beloved releases a few spins, she’s not an artist that has stayed constantly on my radar, nor have I ever had the pleasure of seeing her live before this weekend. Not knowing what to expect, I, misguidedly, expected Crutchfield to employ the help of a full band on tour. Instead, she came out with only an electric guitar, and an additional guitarist to back her, performing her songs in a way that almost took on a hybrid of her lo-fi, minimalist debut album and more filled-out followup. Though it didn’t have the momentum and thickness of a full band set, seeing Waxahatchee in this very intimate and stripped down way really allowed the songs room to breathe, and for their essence to spill though. Towards the end, Katie invited her sister to come out and assist with vocal harmonies, and, on the last tune, took over keyboards, for an epic, abrasive synth tune. While I wish the set would have been a bit more dynamic, I enjoyed it all the same, and felt sufficiently ready to rock by the time Jenny Lewis took the stage. 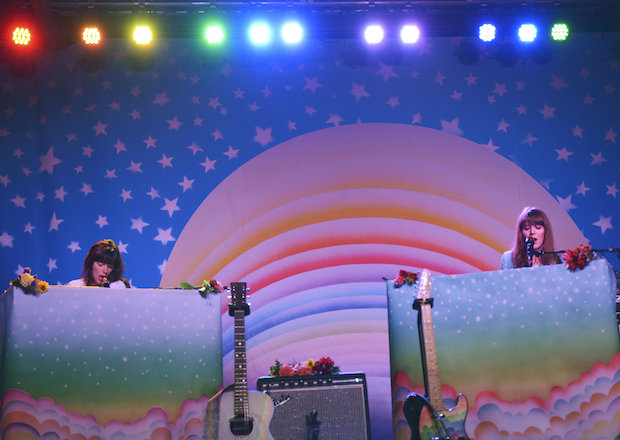 In this chapter of her career, Jenny has been using cosmic rainbow colored imagery to keep consistent the Voyager theme. From her backdrop to wardrobe to even the instruments she plays, everything is designed to match in glorious, multi-colored harmony. I already got a preview of this back in July at Forecastle Festival, but, on a less daunting stage, it all blended together even more harmoniously and enhanced the effect. The Voyager is both deeply personal and ambitiously broad; a mix of tales of relationships, longing, aging, and analyzing life on a broader cosmic scale. While it’s a logical progression of sorts, it’s also a whole new side to Jenny Lewis, and one she’s allowed to run unchecked. Backed by a brand new band, which includes local performers Natalie Prass (keys, guitar, vocals) and Megan McCormick (guitar), Lewis has never sounded better, and has never performed with such individual confidence as she does now. A lot of this certainly stems form the caliber of her cohorts, who, throughout the show, all swapped instruments, provided gorgeous harmonies, and helped the seasoned performer channel even more chemistry and charisma then, dare I say, the Rilo Kiley days. Working the packed room, Jenny’s set included eight of the The Voyager‘s ten tracks (strangely omitting its title track), as well as a generous helping of Rilo Kiley, older solo tunes, and even a somewhat out of place Grateful Dead cover. 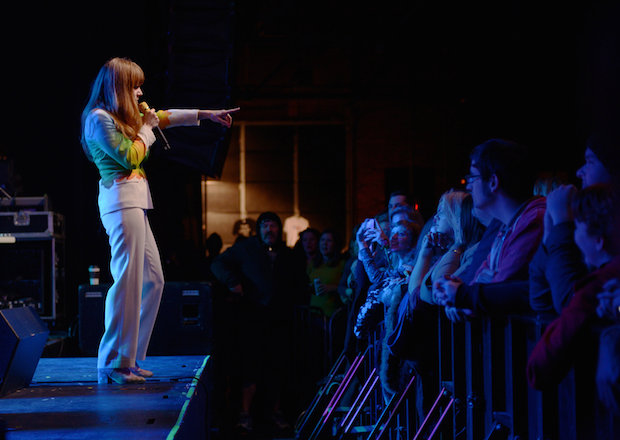 Not only is Jenny Lewis one of indie pop’s most treasured artists, but she’s also just a generally cool human being, and that fact has never been more apparent than in the way she carried herself, interacted with fans in a grateful and playful manner, praised her bandmates, and told hilarious and amazing personal stories (including one about a less than picturesque vacation to Hawaii). While points of the set felt a little out of balance in pacing, that’s because the breadth of her output is so varied, and she did her best to sneak in something for everyone. A special surprise came during the encore, when Louisville’s The Watson Twins emerged to assist with gorgeous, group vocal tune “Acid Tongue,” then “Rise Up with Fists!!” The crowd, for their part, never lost an ounce of enthusiasm, and Jenny held us all in the palm of her hand, roaming around the stage and bantering from start to finish. As obsessed with The Voyager as I was going in, getting a chance to see it properly performed live was an other-wordly experience, and, certainly, a high point of my entire year. If you haven’t yet witnessed the wonder that is Jenny Lewis, well, you’re sorely missing out.

With Arms Outstretched (Rilo Kiley)
Acid Tongue
Rise Up With Fists!! (with The Watson Twins)
She’s Not Me