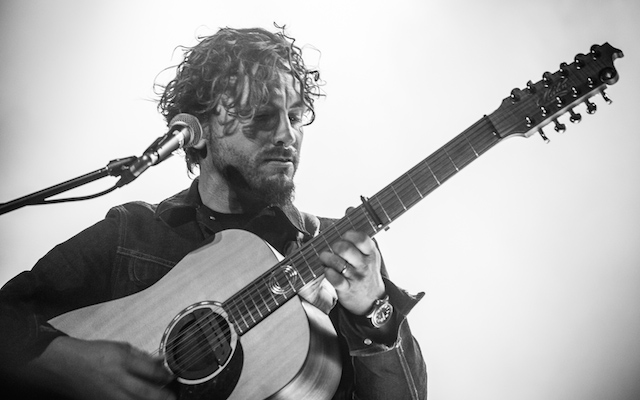 If you’re not already aware, Nashville music crowds have a reputation for being tough critics. It’s tough to ascertain exactly why; perhaps it’s because we’re constantly surrounded by music, or that many of us work in the music industry, or that there are 30 different shows every night of the year one could go to. Suffice it to say, it takes a lot to get a Nashville crowd excited. That being said, the crowd was into it Thursday night at the Ryman. Why’s that? Well, it’s only because best-selling Australian virtuoso John Butler and his band were in town. If you’re not familiar with the man’s work, you ought to correct that, as few people have ever played the guitar as skillfully as Butler. There’s little doubt this is one of the best shows the Ryman will put on this year, but it didn’t start with Butler. It started with a Norwegian woman by the name of Monica Heldal.

Being rather cold outside, the hoards of people streaming down Commerce Street were more than happy to step inside the Ryman and warm up their bodies. Few people, however, were expecting to have their souls warmed, which is the exact effect celebrated songwriter Monica Heldal had on her audience. Joined by Oyvind Blomstrom, the duo played an acoustic set that was remarkably engaging. In truth, much of Heldal’s music follows a rather simple formula: two guitars, two voice. It’s not anything particularly unique in that regard. However, Heldal and Blomstorm execute their tunes with such delicate poise, it sends chills down your spine. Their music resonates deeply, and it’s safe to say that the pair made a number of new fans that night. The set had a number of highlights, but of particular note was the duo’s cover of the Glen Campbell classic, “Wishing Now”, and their closing track, “I Don’t Mind”. Also worth mentioning is the title track from Heldal’s most recent album, “Boy from the North”. Though most of the set was played acoustically, Blomstrom switched to an electric for this track. He managed to make this transition tastefully, and the electric guitar deftly served its purpose without overwhelming the acoustic or vocals. The pair’s attention to little details such as this rendered a very tight performance, and you’ll definitely want to catch this act next time they’re in town. 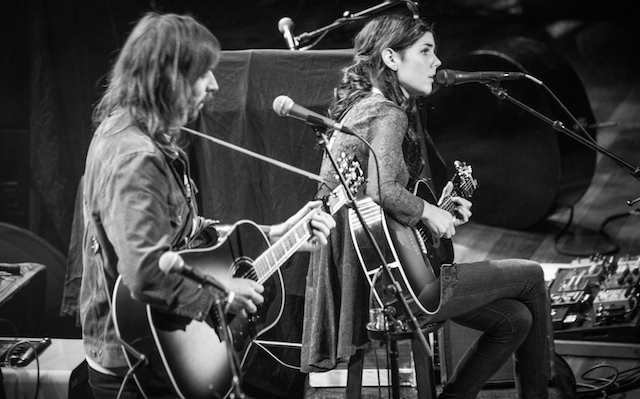 With Monica Heldal being the only opening act, the evening quickly jumped straight into the headliner performance by the celebrated Australian act the John Butler Trio. As indicated by the name, this group consists of John Butler, Byron Luiters, and Grant Gerathy. You’ll notice we didn’t indicate who plays what instrument, as each of these talented musicians played several instruments over the course of the show. In short, however, Butler played both his signature 11-string and standard electric guitars and sang lead, while Luiters held down bass, synthesizer, and BGV’s. Gerathy also helped out with BGV’s, as well as drumming and marimba. Despite the impressive number of instruments (a guitar tech brought a new instrument literally every song), the trio managed to pull off a remarkably focused performance that aptly displayed their musical abilities. All three members enjoyed extended solo sections and jams, though it goes without saying that Butler’s unearthly guitar skills was often the center of attention. 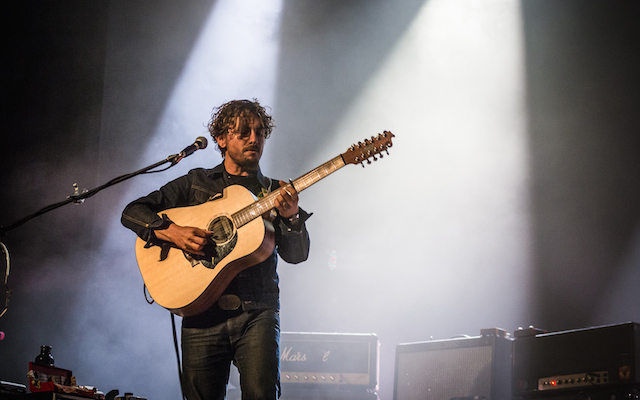 There are a number of artists out there that have made a name for themselves based on technical ability alone. We don’t want to call anyone out by name, but you know the type we’re talking about: half of every song is a guitar solo consisting entirely of non-stop shredding. Being the intelligent chaps that they are, the guys in the John Butler Trio recognized that this style of performance is rather boring. Sure, it’s impressive watching Butler cleanly hit 128th notes for 5 minutes straight, but it’s only impressive the first few times. To combat this, the group changed up their performance a number of times. The show started in a standard electric format, but about halfway through, a technician brought out a single microphone. After insisting that the audience be absolutely quiet (more on this in a minute), the three piece gathered around the mic for acoustic renditions of “Spring to Come” and “Half Empty Cup”. From there, Butler played his signature instrumental track, “Ocean”, by himself, before inviting the rest of the band out. They then entered a bluegrass jam that transformed in “Better Than”, before finally moving back into an electric jam for the remainder of the set and the encore. These variations kept the audience on their toes, and gave the band several unique avenues to display their talents. Very few bands could have pulled this off, but hey, very few bands can manage off any of the musical stunts the John Butler Trio pulls.

There is one gripe we had about the show, though it doesn’t have anything to do with the artist. Instead, we’re talking about crowd etiquette. Prior to playing their single mic, acoustic renditions of “Spring to Come” and “Half Empty Cup”, Butler made several requests that the audience be as quiet as possible. After all, the group was playing acoustically, through one mic, and an excess of background noise would have ruined the performance. Despite multiple requests, Butler had a very hard time getting the audience to quiet down; he even had to restart “Spring to Come” because the audience was so loud. Actually, it’s unfair to say the audience was loud. 98% of the crowd was perfectly quiet. However, a very drunk 2% would not stop yelling and catcalling, no matter how many times the band asked they stop for just a minute or the rest of the audience shushed them. The band took it like champs, smiling and making jokes, but come on. We know you’re coming out to this show to drink a bit and have fun, and we get that you spent $40 to be in the room, but that’s no excuse to blatantly disrespect a performer’s request. It reflects poorly not only on the person screaming, but also the audience as a whole. We don’t want to sound like we’re scolding anyone; by all means, have fun,  get drunk, and even scream your heart out when you’re at a show. Just recognize that there’s a time and a place for all that type of behavior, and that when the artist makes a specific request for silence, it is no longer the appropriate time or place.

Anyways, beyond that minor snafu, the night was a rousing success. Both acts were very tight and displayed a remarkable level of musical ability. We highly encourage readers to catch both the John Butler Trio and Monica Heldal next time they come to town, and in the meantime, check out the killer photos taken by Matt Cairns in the gallery below. Also, both these acts recently released new albums; give them a listen if you’ve got the time.