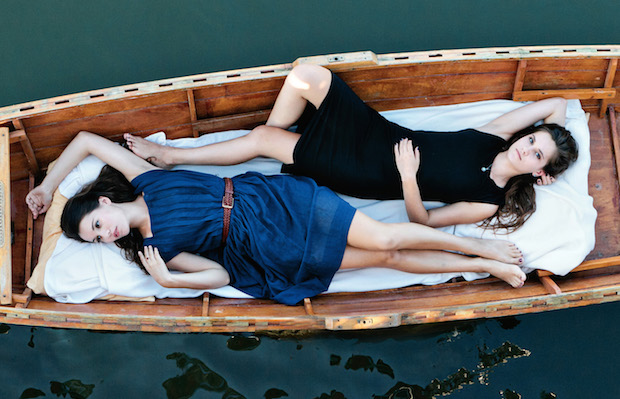 When we arrived at The Stone Fox, nearly every single table was taken – we had to settle for one that gave us a profile view of the artists, but we were ok with that as long as we could see what was happening. We arrived a couple of minutes late, but The Stone Fox clearly likes to get things going right on time because Shannon Hayden was already through half of her first song when we sat down at 9:04 (show time was 9). We ended up having to share our table with some friendly strangers who were comparing how ridiculous the names of their mixed drinks were, but not many people spoke throughout the performances – the crowd was respectful and eager to hear new music. The moment we walked in and heard what was being played, we understood why.

Shannon Hayden is a very impressive young woman: she sat in a chair the entire time and commanded our attention like a pro. No ridiculous theatrics were needed, no animated movements. She paused rarely to speak and only a few songs out of her set had vocal parts, but her skills made believers out of us that a cello is more than just a classical instrument to be used during operas. She manipulated her instrument to create sounds we never knew could emit from such a piece. Ranging from heavenly to almost demonic, Shannon Hayden transported us through this one instrument to several different planes in a fascinating way. She opened up our minds intellectually so when Lily & Madeleine took the stage, they could teach us everything they know.

Lily & Madeleine are a sister duo that not only look extremely similar, but their voices are so close that at times the two vocals seemed to merge into one. They opened with the song that gained them fame, “In The Middle,” but didn’t linger too long in the past.

“We just released a new album called Fumes, and we’d like to play you some new songs off of it,” they confessed before sweeping us off our feet with lyrics that sang of emotional maturity far beyond their years. Shannon Hayden, much to our delight, joined the girls onstage for the duration of their performance to accompany them on cello (and we think there was a mandolin at one point, but we couldn’t see to be sure).

Lily & Madeleine have extremely calm, careful demeanors that give off the impression that they think carefully about every single word before they say it, which likely accounts for why their lyrics are so deeply poetic and striking. Their songs are relatable to everyone on every level, and it struck us that this is what the current pop Top 40 hits are missing today – they lack the ability to really be interpreted to suit peoples’ needs, and this is what Lily & Madeleine offer. As they stood up there and sang the title track off of their album Fumes, it occurred to us that this is a song so rich in meaning and so carefully crafted that it could be looked at in a variety of ways to suit a variety of needs.

The show, quite simply, was beautiful. No theatrics were needed, no loud, booming music to make our ears ring as we left (but make no mistake, we like that too); these girls command the stage in such a steady, reassuring way that anything more than them just playing their music would be too much. In this case, less is absolutely more, and they’ve mastered it.