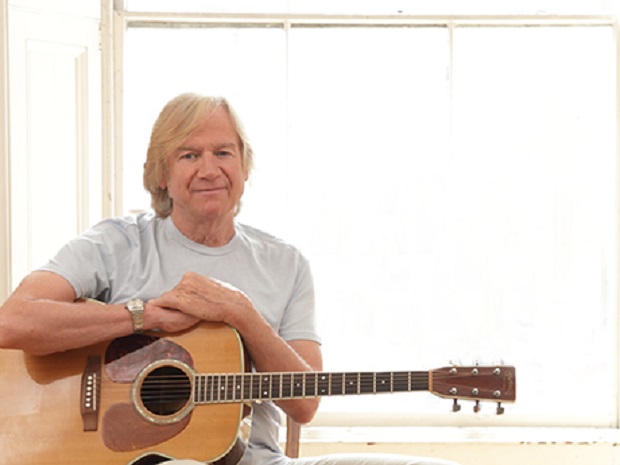 Even if you were not around when the Moody Blues were in their heyday, you would have still appreciated the chance to see Justin Hayward, the group’s onstage figurehead and the prolific songwriter, perform in an intimate venue like we did on Tuesday night at City Winery Nashville.

We arrived at City Winery around 7:30, left our car with the convenient valet, and walked inside to find the lobby filled with people, which was a surprise since we understood that the doors were opening at 7PM. We were later told that sound check had run long, but also that it had sounded great. The doors did open around 8PM, and we were escorted to our table as Mike Dawes was being introduced to open the show.  Here is what we thought.

We didn’t know there was an opener, so Mike Dawes was a pleasant surprise.  He is a 23 year old English virtuoso Fingerstyle guitar player known for composing, arranging, and performing multiple parts simultaneously on one instrument.   He has received strong critical acclaim and plays lead guitar for Justin’s US tours.  He absolutely blew us away with a too short set which included songs from his 2013 debut album, What Just Happened, as well as his arrangement of Gotye’s “Somebody That I Used to Know,” which amassed 1.2 million web views in its first week of release.  In the unlikely chance you have not seen it, here it is…

Justin Hayward took the stage, accompanied by Julie Ragins on keyboards, and kicked off his set with “Tuesday Afternoon” from 1967’s Days of Future Passed. Mike Dawes joined, and they proceeded to beautifully perform songs from several Moody Blues albums and Justin’s most recent solo album, Spirits of the Western Sky, as well as “I Dreamed Last Night” from the 1975 Blue Jays album with John Lodge.  He told several amusing stories in between the songs and leading up to his solo performance of “The Eastern Sun,” before a short break.

I wasn’t yet in Nashville back in 2004, when Moody Bluegrass: A Nashville Tribute to the Moody Blues album came out, or at the Blues’ concert at The Ryman in October 2005 (but I do have the t-shirt); however, I became aware of both when the followup album, Moody Bluegrass Two…Much Love, came out in June 2011. Both albums were produced and overseen by mandolinist David Harvey, so it was a real treat when he and others who had played on the albums joined Justin Hayward to perform two of Justin’s new songs (“It’s Cold Outside Your Heart” and “What You Resist Persist”), bluegrass style. As great as the rest of the show was, this segment was the highlight of the night for me.

Justin, Mike, and Julie closed the show with “Question” and, of course, “Nights in White Satin,” before the encore of “I Know You’re Out There Somewhere.” Justin Hayward’s voice really showed no signs of age and both the small band and enlarged bluegrass band complemented him very well. Maybe it would have been nice to hear a few of the more rocking songs but, luckily for us, we had heard a few of them when the Moody Blues played The Ryman a while back.