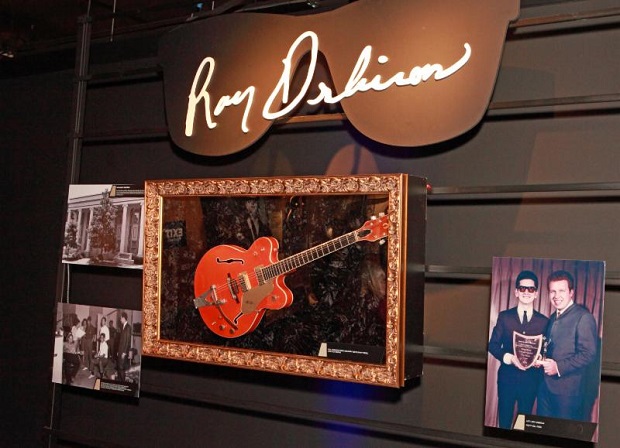 We truly appreciate the Musicians Hall of Fame and Museum, who managed to survive after losing their lease, as well as, a significant portion of their collection in the 2010 flood, only to rise like the Phoenix in their new location at Municipal Auditorium.  As such, we were thrilled to be there when the museum celebrated the grand opening of its newest exhibit commemorating Roy Orbison and the 50th Anniversary of “Oh, Pretty Woman,” which was produced at Fred Foster Sound Studios in Nashville.

The exhibit, which opened to the public on October 30, features items from deep within the Orbison vault. These include the prescription sunglasses that became his trademark, the 1961 Gibson 335 guitar used in recording of “Oh, Pretty Woman,” 1957 Gibson Byrdland guitar, and even the cast from when he broke his ankle in a motorcycle accident.  Roy’s sons were in attendance for the opening as well as Wayne Moss (original session guitar player) and Fred Foster (Monument Records founder and producer).  Even if you’ve visited the Musicians Hall of Fame before, it is well worth a return trip to see the new exhibit. Head here for more information.