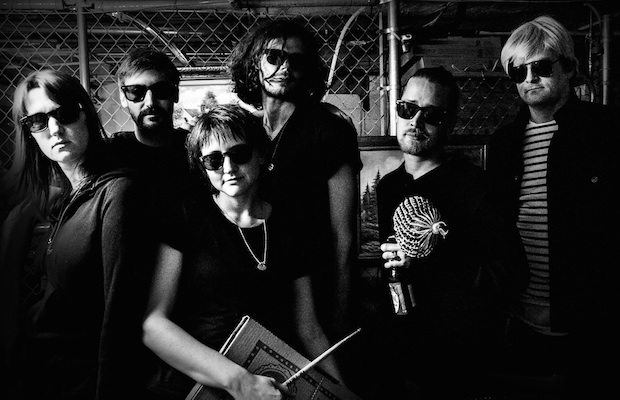 As we announced back in August, The Pizza Underground, a performance art collective who rework songs by The Velvet Underground into parodies about pizza, and count famed child actor Macaulay Culkin among their ranks (as a kazoo player no less), are set to make their Nashville debut TONIGHT, Nov. 5, at The High Watt, alongside over the top dance rock singer Har Mar Superstar. Equal parts bizarre and awesome, there’s one thing this intimate shows promises to be for sure: unforgettable. Shockingly, you can still buy tickets right here, so do that now, then continue reading for more about both acts, plus a special exclusive interview with members of The Pizza Underground.

You know it’s a strange show when Har Mar Superstar is considered the more “serious” talent on the bill. A cult favorite and overtly sexual caricature of an r&b star, Har Mar, real name Sean Tillmann and who also sometimes performs as Sean Na Na, has been a cult favorite in the indie scene for well over a decade. Though his over the top antics and ridiculously flamboyant image and performance style might sometimes distract, at his core Har Mar is, in fact, an incredibly skilled singer and songwriter, and his latest release, last year’s Bye Bye 17, is a true testament to that. Aside from a pop up show last year, Har Mar’s Music City outings have been few and far between lately, so, even if you’re headed to The High Watt out of Pizza Underground curiosity, you should stay for Har Mar’s dance ready, endlessly fun performance.

While they’ve received mixed reactions, those who get The Pizza Underground for what they are: a pizza obsessed, Velvet Underground inspired, somewhat silly piece of performance art (but a hell of a cool one, at that), certainly appreciate their bizarre antics. The group appeared out of nowhere last year with a series of demos and satirical videos, and, since hitting the road earlier this year, have become a real, intriguing commodity. Rather than over-explain or fixative too heavily on their most famous member (Macaulay Culkin just appears to be along for the ride), we’ll let the band speak for themselves. Check out our interview, below, and come witness one weird, awesome performance tonight (we hear there will be pizza)!

NO COUNTRY: How exactly did The Pizza Underground come together, and did you have a clear idea from the start that you wanted it to be a pizza-themed tribute to The Velvet Underground? Why such a specific focus?

AUSTIN KILHAM (keyboard): Well our drummer Deenah Vollmer was on tour in Catalonia with Matt Colbourn , Phoebe Kreutz , and Toby Goodshank on a Deenah-Matt-Phoebe-Toby “ LA Boobs” tour. They were playing a secret show in a cafe that was, in fact, so secret that no one came. The cafe was playing the Velvet Underground and Nico album. All of the sudden it hit them, “what if these songs were about pizza?” Just like that.

Most of us are friends from the New York Antifolk community where there’s a real anything goes DIY attitude. Deenah has been hanging around that scene since 2005. Macaulay Culkin’s friendship and artistic collaborations with both Adam Greene and the aforementioned Toby brought him into the community as well. All of our friendships were thus strengthened by pizza. Cheese is a real glue, you know.

Did you always plan to tour, or was that a reaction to the positive response you received after announcing the project?

MATT COLBOURN (guitar): We didn’t have a choice, really. Pizza fanatics were clamoring for a tour and we are happy to accommodate them. Can you believe, this is our second tour of the year, and we are happy to be with Har Mar Superstar, he’s a great friend to all of us.

You originated in New York City, which is famously known for its pizza. Where’s your favorite place to grab a slice?

If the whole band had to share one pizza, what would be on it?

THE BAND: We are, as a band pizza purists: we like a good plain cheese slice and thin crust all the way – it’s the best indicator of the quality of the pie. A good plain slice is truly inspirational. Now having said that, recently we had the good fortune to create a special Pizza Underground Pie with Two Boots Pizzeria that has Kale Pesto, Garlic, Onions, Plum Tomatoes and Ricotta Cheese. The Two Boots scientists put all these ingredients together in a brilliant way and we are more than pleased how this combination turned out. In fact, since there is a Two Boots right there in Nashville, the store manager Sam Boyer is giving us a selection of pies that we’ll be giving out to the audience and as an added bonus Deenah will be playing the Two Boots box as her drum.

Have you considered branching out into other food groups for you subject matter, or parodying acts aside from The Velvet Underground?

THOMAS BAYNE (Anchovy Warhol): You mean like singing about Calzones or P’zones? No we won’t parody them because they are not pizzas, they are pizza-adjacent. The only thing better than singing about pizza is eating pizza.

What kind of longevity do you see The Pizza Underground having, if any? You are all still active with other projects as well, correct?

PHOEBE KREUTZ (glockenspiel): We are indeed active and pursuing other projects – how about a Pizza Underground television show. Ultimately for us nothing says longevity better than World Domination.

Do you believe that any Pizza Underground detractors might not see the band as it was intended to be, as much a work of performance art as an actual musical entity?

THOMAS BAYNE: Either you get the parody and you enjoy the show or you simply don’t get it. At the end of the day we are there to have a good time and to let the audience have that good time along with us. It’s like circus that we’re bringing to town – just meant to be a lot of fun, hanging around talking and singing about pizza. We sincerely demonstrate our commitment to ridiculous ideas. We mean “ridiculous” in a really affectionate way.

Check out ANOTHER New TWICEYOUNG Track, "Stay the Same," from Upcoming 'Prefer You' EP