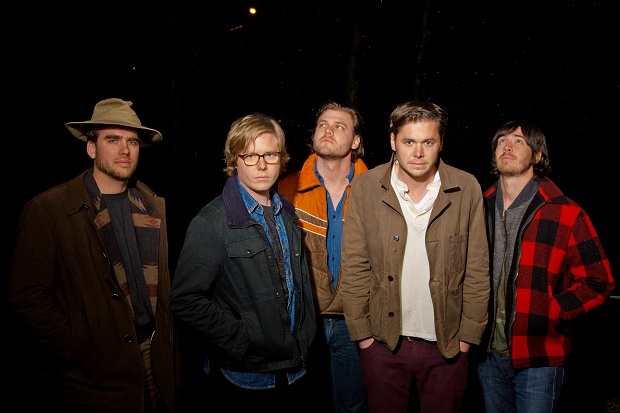 We had snuck out from our day job a little early so when traffic started backing up on I-65, it cemented our decision to check out the Virginia-based Sons of Bill in-store at Grimey’s prior to catching their High Watt show later with Brian Wright and Carl Anderson.

Keep reading to hear more about both shows…

We got to Grimey’s to find a relatively light crowd but people continued to trickle in until a little before the scheduled 6PM start time when the three Wilson brothers (Sam, James and Abe) from Sons of Bill showed up, did a quick sound check, free beer was distributed and Mike Grimes introduced the band.  They had traveled from Cincinnati, filmed a video and already done their sound check at the High Watt.  Apparently, James had also lost his cell phone at a Subway at some point.  They started with several songs from their brand new Love and Logic album and then performed “Santa Ana Winds” off the Sirens album.  When people talk about great sibling harmonies, they are generally talking about sisters but these brotherly harmonies were especially impressive in this intimate venue.  They finished their set with “Road to Canan” with Leah Blevins joining on vocals while James joined the audience.

After a stop into the local watering hole and an unplanned “meeting” with our editor, we headed to the High Watt.  Unfortunately, we missed opener Carl Anderson but got there in time to catch Brian Wright’s full solo set. As much as we enjoyed his performance, the highlight was when he politely asked a group of loud talkers to “please shut the fuck up”.  Finally, someone from the stage verbalized what we are too often thinking.

In contrast to their set at Grimey’s, the Sons of Bill added the other members of the band as well as electric guitars, keyboards, bass and drums for the Hgh Watt show…resulting in a much different sound.  They kicked off the set with the haunting “Lost in the Cosmos (Song for Chris Bell)”, a new song from Love and Logic, which was produced by Wilco co-founder, Ken Coomer.  The set focused on the new album but also included quite a few songs off of Sirens and one or two others.  Once again, Leah Blevins joined the band for a different but equally fine version of “Road to Canan”.  Other standouts for us included “Bad Dancer”, “Fishing Song” and “Brand New Paradigm”.  We had been disappointed when we missed seeing Sons of Bill during the Americana Festival last month so the chance to see them again so soon was appreciated.  Needless to say, we are big fans and looking forward to more time with the new album and catching another live show somewhere down the road.