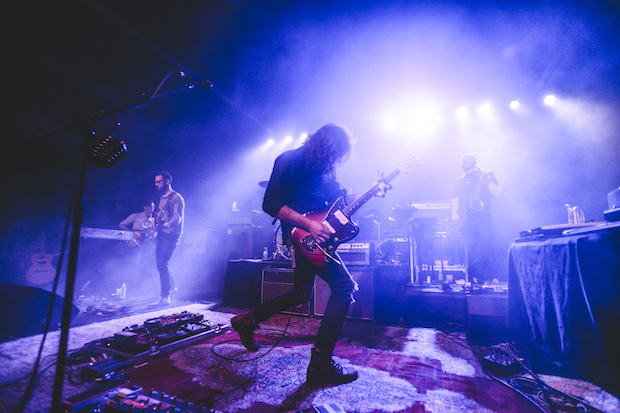 The War On Drugs. Photo by Jake Giles Niles.

Not sure how many of you were out last Monday night, but we thought we might need to unsheathe the ark.  Rain, rain, rain, and more rain made us late to our most eagerly anticipated show of the fall, but we would have canoed if we had to to see The War On Drugs at Marathon Music Works.  Unfortunately, the weather made us miss most of the opening set with former Walkmen frontman Peter Matthew Bauer.  Regardless, read on to hear about one the best nights of music that we have seen of late, and check out some incredible photos from Jakes Giles Netter.

The rain let up just slightly for us to escape our vehicle and make the dash down the street to Marathon.  We noticed the water pooling up along the curb, but didn’t think too much about it, far too eager to get into the venue.  While our hasty parking job did get me (though not our photographer) into the venue in time to catch the last two songs from Peter Matthew Bauer, it proved to have been ill advised at the end of our evening.  More on that later though.

The Walkmen have been in steady rotation for the past decade or so, and I was heart broken to hear that they had called it quits.  The new solo work from Peter Matthew Bauer mildly sparked my attention on the record, and I was eager to hear how it translated live.  To put it in the words of a few friends that I ran into at the show, “The Walkmen Lite” is probably not the nicest way to describe the artist’s hard work, but, if you are a fan of The Walkmen, it’s not really an insult.  Charismatic and fierce, Bauer leaves nothing on the table with his new solo work.  And, while we hope there is a reunion of The Walkmen in the future, this solo effort should fill the missing void for fans.

During the set change, the crowd began to really file in for the show creating a sticky hot room, which turned out to be a good thing for the band.  When they finally took the stage, I immediately knew that this was going to be a special night.  I’ve had the pleasure of seeing quite a few great shows at Marathon over the past few years, but this was the best crowd that I’ve seen since the unbelievably sold out Arctic Monkeys show a couple of years ago.  Screaming, fist pumping fans were going to get every bit of what they braved the weather for.  An added effect that brought out some “ohs” and “ahs” was that the room was especially dark, except for the stage lighting, which made the lightning bolts outside of the building light up the skylights in a pretty impressive fashion.

The War On Drugs didn’t hold back from the get go.  They blasted the crowd with one of the more aurally pleasing sets that I’ve heard in that venue, though folks up at the front came back to our perch complaining of how loud it was.  Regardless, by the time the band tapped into “Under Pressure” with the third song, all complaining was gone and the crowd was feeling it.  It was when the band started into their biggest single from their new record “Red Eyes” that you really got to feel how special the show was, as the band utilized a baritone sax and key to create an incredibly full sound that practically mesmerized.

The War On Drugs is a bridge for music fans between indie rock, though it harkens back decades, and the jam bands that continually fill stadiums with their improvisational shred sessions.  It was like Pink Floyd decided to join forces with Dire Straights for a minute, or maybe Bruce Springsteen decided to lend a hand to My Morning Jacket.  The latter was actually in attendance checking out their reported tour mates for the upcoming year.  In a city that is often over saturated and blitzing with options, this was a true night for music fans. If you have the chance to see them soon (Bonnaroo or Forecastle are highly likely next summer) do yourself a favor and make that happen.

Just try not to do it on a night where you have to wade through a foot deep puddle to get back to your car.