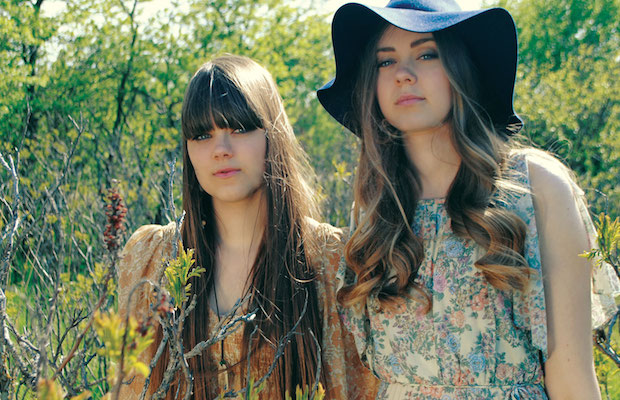 First Aid Kit have had something of a textbook career for success, graduating from The End to 3rd and Lindsley to, now, The Ryman on Oct. 29, with each record release cycle. Hailing from Sweden, the indie folk duo, comprised of two sisters barely in their 20s, have produced some of the most jawdropping and beautiful songs of the past few years, and their performance at this summer’s Bonnaroo was one of our festival highlights. While the band’s Ryman show is still more than a week away, tickets are nearly gone, so we wanted to fill you in now, lest you miss out of one of the best shows of the fall.

Comprised of sisters Johanna and Klara Söderberg, Swedish folk pop duo First Aid Kit have been on our radar since their hauntingly gorgeous 2010 debut, The Big Black and the Blue. At that time, the girls were still teenagers, and, previously, had found some moderate success from a Fleet Foxes cover they had posted to YouTube, which helped foster a debut EP. Over the past few years, the group have hit the ground running and have never slowed down. Among their impressive list of accomplishments is an association with Jack White and Third Man, a Mike Mogis (Bright Eyes) produced sophomore effort, collaborations and tours with Conor Oberst, numerous television and music festival appearances, and much more. Their third album, Stay Gold (also produced by Mogis), arrived this summer, and the gals, now 21 and 23, respectively, have become seasoned veterans. We couldn’t think of a more magical place than the Mother Church to take in their breathtaking live show.

Fusing traditional folk with indie rock, Americana, and pop music, with the occasional psychedelic or experimental impulse, it’s sometimes easy to forget First Aid Kit’s Scandinavian roots. But, though it’s overshadowed by their affinity for more Americanized folk, the influence of their upbringing is definitely there, and lends a uniqueness and depth that few other groups can claim. Their worldliness is especially present in their lyrical and thematic focus, propelling their universally relatable yet incredibly personal songs to amazing and engaging heights. Check out the video for Stay Gold lead single “My Silver Lining” below, and grab your tickets to The Ryman show while they last.

No Country's Guide to Nashville at CMJ 2014