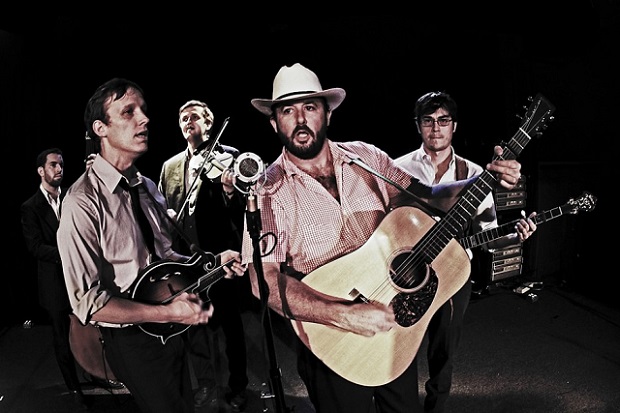 We got to the Station Inn a little before 9PM to find a good crowd.   We ordered a Shiner and settled into our perch at the bar (but away from the pizza pick up spot).  The band was milling around, but, at some point, a lone figure took the stage.  We didn’t know there was an opener, so we were a bit surprised when Brad Folk kicked off a short solo set before Town Mountain hit the stage.

Keep  reading to hear more about the show…

We have seen Bradford Lee Folk before, but always with his band, the Bluegrass Playboys, who are playing the Station Inn this Friday.  Brad seemed to be as surprised to be opening the show as we were to see him.  After a few songs, he confirmed with the boys from Town Mountain that he was to play for 30 minutes but around that mark, they suggested he play one more.  The crowd continued to grow during his set, and his set seemed to grow on the crowd.  He finished with songs by Mac Wiseman and Hank Williams as well as “A Little Bit of Everything” by Dawes.  Brad has a classic country vocal delivery, and comes across as an endearing, old soul who capitvates his audience.  If we didn’t already have plans, we’d be back to see the band on Friday.

As we said in our preview earlier this week, Town Mountain recently released their first official live album, Town Mountain: Live At The Isis, recorded in their hometown of Asheville, NC.  The audio was mixed by Scott Vestal, acclaimed banjoist with the Sam Bush Band, who was working sound for this show.  One of the cool things about the Station Inn is who you might see there.  In addition to Scott Vestal, we also saw Kelsey Weldon, recently named as one of 10 Artists You Need to Know, stellar bassist Mike Bub from 18 South and a few others we’ve seen playing around town.  We found ourselves sitting next to a fan / friend of the band who knew every word and gave a shout out during every song.  She correctly advised that “Tarheel Boys” was good one.  Myself and the rest of the appreciative crowd agreed…they killed it.  Some other standouts for us were Phil Barker’s “Lawdog” and the fiddle tune “Four Miles;” and, how can you not like a song titled “Whiskey with Tears?”  They threw in a great cover of Bruce Springsteen’s “I’m on Fire,” followed by another cover…a rousing version of “Happy Birthday” to the banjo player, Jesse Langlais.  The played at least one new song, “Coming Back to You,” which should be on their next studio effort scheduled to be out in early 2015.  We’ll be waiting…