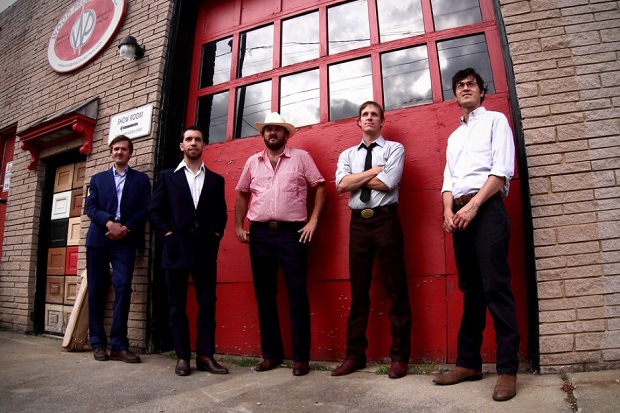 Nominated for the International Bluegrass Music Association’s 2014 Award for “Emerging Artist of The Year”, hard drivin’ bluegrass band Town Mountain hits the Station Inn stage this Wednesday at 9PM.   This year’s nomination follows last year’s honor of receiving IBMA Momentum Awards for “Band of the Year” and lead singer Robert Greer for “Vocalist of the Year”.  More about the band after the jump…

In addition to Greer on vocals and guitar, Town Mountain also features Jesse Langlais on banjo and vocals, Bobby Britt on fiddle, Phil Barker on mandolin and vocals, and Nick DiSebastian on bass.  The past two years have pushed Town Mountain into the upper tier of acoustic bands performing at some of the most prestigious festivals in the country such as MerleFest, Grey Fox, Rockygrass, Suwannee Springfest and the Targhee Bluegrass Festival.   Town Mountain’s tight harmonies and stellar in-house songwriting have become the band’s trademark.   They recently released their first official live album, Town Mountain: Live At The Isis, which was recorded in their hometown of Asheville, NC.  The album features live versions of previously released studio material and includes both original songs and Town Mountain-tweaked covers such as “The Race Is On” and “Orange Blossom Special”.  The group has focused on the goal of creating a unique sound and brand while still giving a nod and a wink to the traditional side of the bluegrass genre.  Town Mountain has been busy writing new songs for their next studio effort which will be out in early 2015.  For a sneak peak at what to expect, watch the band perform one of their new original songs in this session filmed by Boulder’s Second Story Garage.

Town Mountain will perform Wednesday, October 15 at the Station Inn. The show is 21+, begins at 9PM (doors at 7PM), and tickets are available at the door for $12 (cash only).