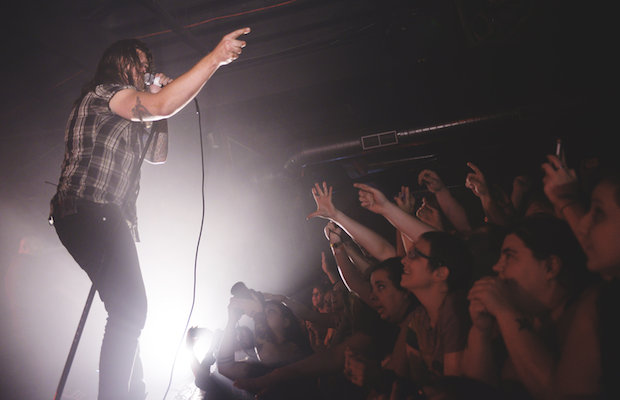 I’ve seen emo/pop punk turned alternative/post-rock outfit Taking Back Sunday many times and in many incarnations over the years, but none have been as strange or unique as their last performance in Nashville in late 2013. Forced to abruptly exit the tour due to a family emergency, frontman Adam Lazarra, the group’s most visible consistent variable, was absent, and a non-member of Taking Back Sunday, former Underoath vocalist Spencer Chamberlain, was tapped to fill in. And, while this was certainly a sight to see, and a fun and unforgettable night, it left me yearning for the real, modern, second (or third or fourth) wind Taking Back Sunday experience in a club setting. Last week at Cannery Ballroom, I finally got that wish, and frnkiero andthe cellabration, Jet Black Alley Cat, and Harbours were there to support. Keep reading for a review of the show, plus a photo set! 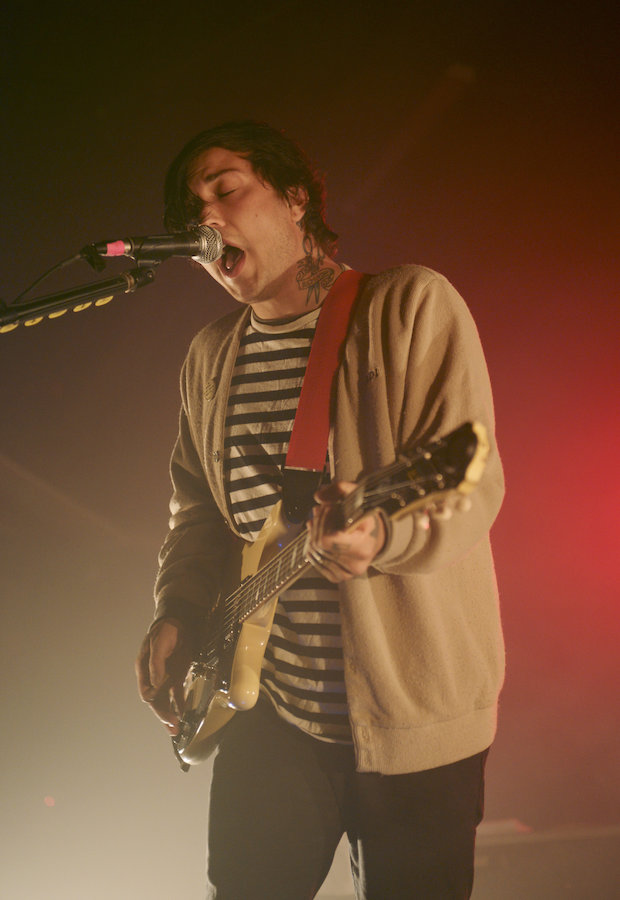 I, unfortunately, did not catch the first two opening acts, Harbours and Jet Black Alley Cat, but managed to arrive just in time for My Chemical Romance offshoot frnkiero andthe cellabration. Much of this tour has been a co-headliner with The Used, who, for whatever reason, were absent for the Nashville date, forcing Frank Iero to step up as direct support. Admittedly, I’ve been a bit more in tune with Iero’s former bandmates’ other solo endeavors than his own, but, before the show, had made a point to listen to his debut, Stomachaches, and thought I had an idea of what I’d be in for. Live, Iero was heavier, more aggressive, and more intense than I ever imagined, balancing his own more experimental, goth rock tendencies with his practiced and refined showmanship, garnered from years of touring with his massive former band. As a frontman, Frank held his own. It surely must be tough to stand in the shadow of a singer so great and so electrifying as Gerard Way, and it would be unfair to compare to the two, but know this: Fran Iero is not trying to mimic or recreate anything he did with My Chem. The cellabration is the sound of guitarist exploring his own voice and blazing a new path, and, live, it’s quite an exhilarating spectacle. 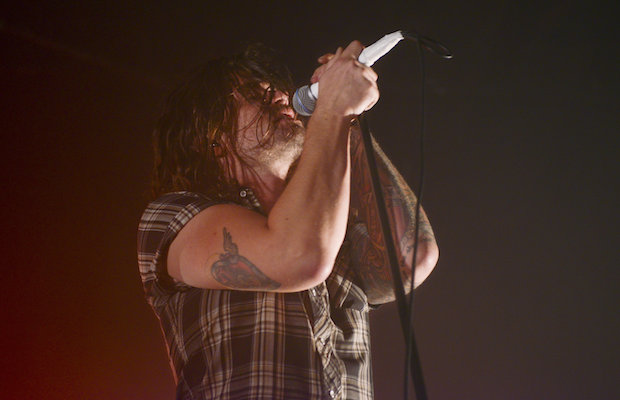 The room continued to swell as Taking Back Sunday prepared to take the stage. An 18+ show, those in attendance were a curious mix of young champions of the genre, longtime fans who never grew out of punk, and outsiders who likely turned up for nostalgic reasons, or became hip to TBS during their more radio-friendly years. While the Cannery Ballroom makes sense for a show like this space-wise, my one gripe is, for bands as loud and crunchy as Taking Back Sunday (and frnkiero), that the sound can be very muddy and hard to decipher. This was certainly the case as soon as TBS came out to an intro track and exploded into new single “Stood a Chance,” though, a few songs in, my ears began to adjust (it also helped that I knew every single note and every single word). Taking Back Sunday have been back to their “classic” lineup now for four years, and, although I’ve seen them numerous times since, it has always been under special circumstances- festivals, nostalgia tours, minus a key member. Because of this, I was incredibly curious to see what songs they would select. Proving harmoniously in tune with their fans’ divided tastes (and almost universal dislike of their fourth album, New Again, from which no songs were played), the group performed an even numbers of track from each album, except for their debut and fan favorite Tell All Your Friends, which took the lion’s share 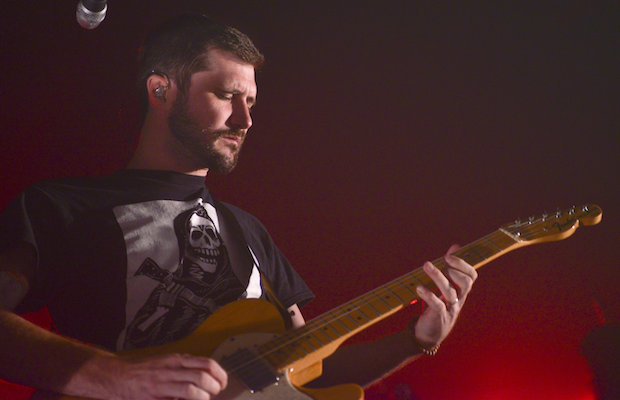 Taking Back Sunday have now existed with this lineup far longer than any other, and it shows. Frontman Adam Lazzara can still be a little rough around the edges in concert, but it’s part of his appeal; the spazzy, mic swinging, speaker climbing theatrics were in full effect, as were his profound, mid-show rants. A perfect counter-blanace, guitarist and co-vocalist John Nolan possesses the precision and drive to keep the momentum going throughout, and serves as the glue that holds the combustable force of Taking Back Sunday together. An additional guitarist was utilized at this particular show, something I’ve seen the band do off and on for years, though, given the muddiness of the room, it was hard to tell how much he added. While I’m inclined to say that the group really brought out the hits, I would consider the vast majority of their catalogue to be “hits,” or at least to possess a sense of modern nostalgia that transports me (and, apparently, the majority of their fan base) back to the time, place, and mindset where I was when I first listened. I love each era of Taking Back Sunday for different reasons, so rather than lean heavily on the excitement and nostalgia of the “old stuff,” I’ll say that I was just as drawn in by the refined approach and renewed enthusiasm they brought to selections from their latest, Happiness Is.

Since my formative, punk fueled high school years of musical transition, Taking Back Sunday have held a special place in my heart, not just because they write songs in a way that sets them apart from their numerous peers (many of whom have been lost in the shuffle of time), but because they channel an earnestness, a rawness, and a gut-wrenching relatability that few artists of any genre can claim. This quality and sense of community carries forth to the band’s live show, and, enhanced by their unwavering ability to entertain, binds every member of the crowd for a hour or so, making us more than just music fans, more than just Taking Back Sunday fans to become a part of songs that are bigger than the band who wrote them and bigger than the fans screaming along to every word. It’s shocking and amazing that a group like this could still be intact, much less still so relevant, in 2014, but Taking Back Sunday have proven their ability to survive the test of time, and, whether you’ve known of their greatness for years or you’re just now venturing into their scene, know that they’re more important than they’re often given credit for, and are a live powerhouse you owe it to yourself to see.

Stood a Chance
Cute without the ‘E’ (Cut from the Team)
Liar (It Takes One to Know One)
They Don’t Have Any Friends
Timberwolves at New Jersey
Faith (When I Let You Down)
Bonus Mosh Pt. II
Number Five with a Bullet
What’s It Feel Like to Be a Ghost?
A Decade Under the Influence
Set Phasers to Stun
Better Homes and Gardens
Error: Operator
You’re So Last Summer
One-Eighty By Summer
My Blue Heaven
Flicker, Fade
You Know How I Do

All the Way
Call Me in the Morning
MakeDamnSure

1. frnkiero and the cellabration @ Cannery Ballroom – 10.7.14 // Photo by Mary-Beth Blankenship

2. frnkiero and the cellabration @ Cannery Ballroom – 10.7.14 // Photo by Mary-Beth Blankenship

3. frnkiero and the cellabration @ Cannery Ballroom – 10.7.14 // Photo by Mary-Beth Blankenship