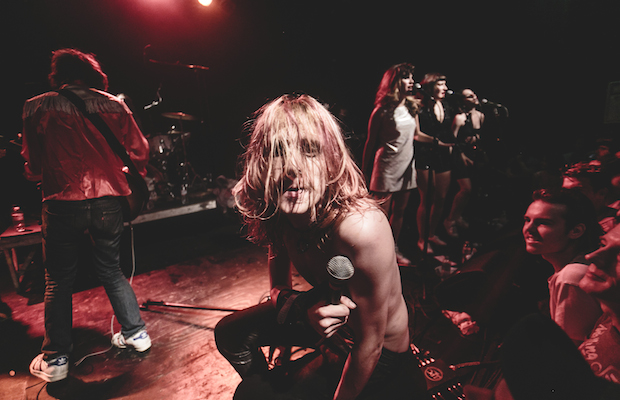 Fans packed into the Exit/In last Thursday night for an almost (if not completely) sold out show to see Foxygen revive the kind of rock and roll that our generation has desperately been missing, with support from Dub Thompson and Luke Temple. Below, check out our review of the incredible night, complete with tons of photos!

Unfortunately, we didn’t arrive in time to see all of Luke Temple’s set, but we did manage to catch his last song, which was powerful enough that it left an impression all on its own. The stripped-down, acoustic song about attempted suicide was much different than the electro-pop style that the New York-based musician usually records, but definitely demonstrated his craft for powerful songwriting. It takes a certain talent to sing about such a sensitive topic, but he pulled it off beautifully. 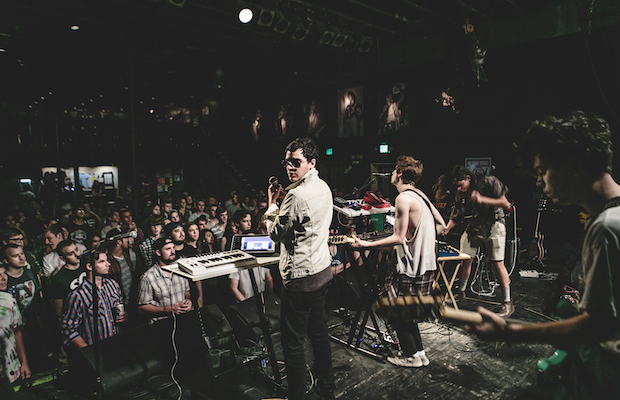 There couldn’t have possibly been more contrast between the first set and the second act, and, in this case, it was a good thing. California duo Dub Thompson helped us put our exposed feelings back into their boxes to dance along to their mix of psych, rock, and dub (just in case you couldn’t have guessed that by their name). Upon first sight, it looked like a bunch of teens partying on stage with their friends, and that’s basically what it was. Founding members Matt Pulos and Evan Laffer are only 19 years old, but their stage presence made it seem like they’ve been doing this forever. One of the best parts was the hilarious, deadpan way that the songs were introduced. My personal favorite was, “This song is about the Nixon resignation,” which was followed by loud, chaotic noises and crazy dance moves that got the crowd going. 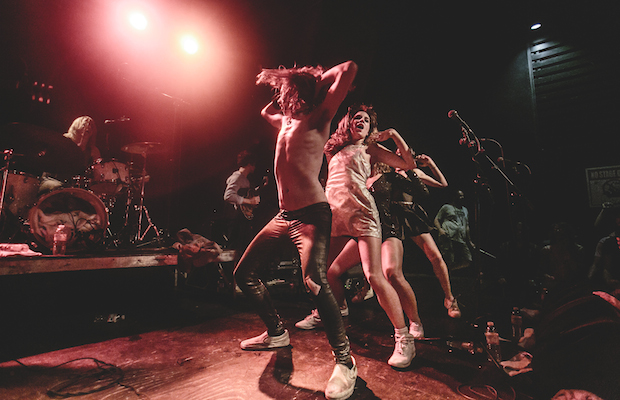 It was only fitting that a trio of foxy ladies came out decked in mod fashion to set the retro tone that would stick with us for the rest of Foxygen’s set. The rest of the band finally assembled, including keyboardist Jonathan Rado, and waited for frontman Sam France to make his grand entrance. They dived right into their single “How Can You Really” from forthcoming new album …And Star Power, a highly danceable tune reminiscent of the Motown era and complete with the band of female backing vocals. Listening to Foxygen’s recorded music is a completely different experience from their live show; everything they do on stage is ten times more amplified than what you hear on the album. And nothing about it is very modern, which is great if you’re one of those people who aren’t schooled on music from the ’60s and ’70s (like myself). France had so much energy while performing that he almost looked insane at times. In between jumping and kicking and flailing around, he jumped down into the crowd and walked up to people to scream-sing in their faces. Things got even more interesting when a stage-diver planted a kiss on France and then jumped back out into the crowd. Everyone calmed down a little bit when they started playing “Everyone Needs Love,” the second to last song from the upcoming 24-song double album, and transcended into what we thought was the end of the show, but after enough chanting of “Foxy-gen! Foxy-gen!” they reemerged for an extended encore of “Cosmic Vibrations.”

So, if you missed your chance to see Foxygen bring their music to a whole new level, then we’re terribly sorry. You can, however, pick up the new album  on Oct. 14, and wait patiently for them to bring their rowdy show back to Nashville.