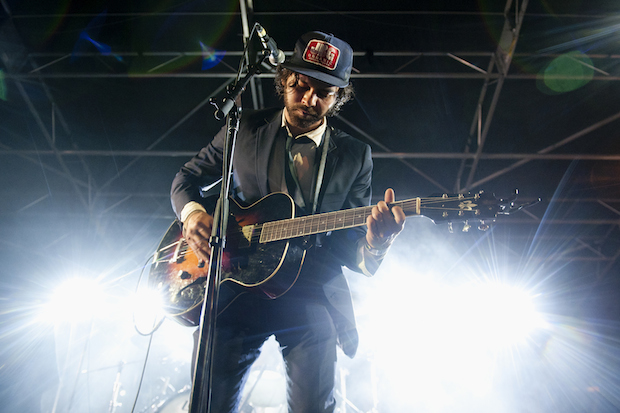 Great news Music City: Austin troubadour and alt-folk one-man-band Shakey Graves is coming back to town, after some Americana Fest performances, for a Mercy Lounge engagement with fellow Texas folkster Joe Sundell on Oct. 16. Tickets are currently available for just $12, or, if you’re feeling lucky, you can try to win a pair for FREE, on us, after the jump! Read on for a taste of the tuneage and more information on the performers, and don’t forget to sign up for your chance to win.

Shakey Graves, birth name Alejandro Rose-Garcia (in case you were wondering), is probably one of the best one-man-band performers we have ever seen. One heel is on a peddle for a kick drum he made out of an old suitcase, a peddle for tambourine is under the other foot, both stomping out the rhythm. All the while, there is some epic blues/folk finger picking and heavy alt-Americana crooning going on. He got his start as an actor, with a reoccurring role on Friday Night Lights, but began earning his bones as a musician in New York City’s underground anti-folk scene. His 2011 self-released debut, Roll The Bones, was met with much critical praise and ever growing fan appreciation. Now he’s back with a new album, And The War Came, which drops Oct. 7. Check out a live performance of the lead single “Dearly Departed” below, and don’t forget to enter for your chance to win tickets.

Joe Sundell grew up in rural Arkansas playing all types of folk and some traditional country music with his father and brother Jack. After college, he moved to Austin, TX and released five albums with various local bands before striking out on his own. His second solo album, The Hat Thief CD, dropped this past March, and he has been touring in support. After you enter to win tickets (or just buy them on your own), be sure to get to Mercy early to enjoy his bluegrass, Dixieland Jazz, and country blues fair.

Enter to win tickets by filling out the form below. Must be 18+ to attend, per event’s age policy. After you have entered, there will be the option to share this contest via social media. For each person that you refer to the contest, you will receive an additional entry. If you experience any trouble with the  contest widget, or have any questions, feel free to email us at [email protected].

Winner will be announced Wednesday, Oct. 15, at 12 p.m. CDT, and will receive one pair of tickets. Good luck!