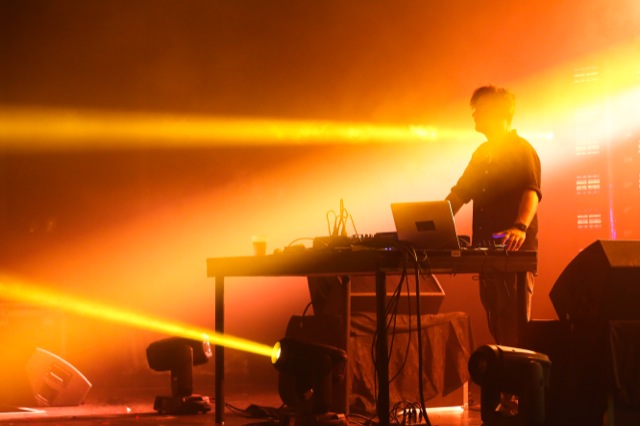 Here in Nashville, we are fortunate enough to have a wide variety of music offerings just about every weekend, and last weekend proved to be no exception to this trend. From rock to rap to country, just about every type of music could be heard, but this weekend our focus lie on a rather unusual niche: downtempo electronica. In order to delve into this chilled out genre fully, we made it out to English trip hop artist Bonobo‘s set with opener Jim-E Stack at Marathon Music Works. This was already lined up to be a great show (so great, in fact, that we even gave away tickets to the show), but then at the last minute, news came that the show would be combined with proto-disco group Jungle and the artistic Beaty Heart. The inclusion of these acts turned an already great show into something fantastic, and we were lucky enough that photographer Shayne Garcia came along with us to capture the event last Sunday, September 28th at Marathon Music Works. Anyways, that’s enough with the generalities: after the jump, we’ve got high quality photos and an in-depth review that will hopefully shine some light on one of the most interesting up-and-coming genres in the Nashville scene.

Though we’ve already mentioned Nashville’s growing affinity for downtempo electronica, it’s worth mentioning that only a fraction of the city follows this genre closely enough to justify spending $20 on a ticket for a Sunday evening show. Throughout the evening, Marathon grew more and more packed, but during the first set by London based rock project Beaty Heart, only the diehard fans had made an appearance. Fortunately, this number was great enough that the room didn’t feel empty, and from the very start of the show, people were dancing and moving to the bass- and groove-heavy tunes put on by Beaty Heart. If you’re unfamiliar with the group, the most obvious sonic comparison is Animal Collective, but don’t let that mental image of pretentious mustachioed hipsters that invariably accompanies thoughts of Animal Collective scare you away from Beaty Heart. This group puts on talented music that’s quite unlike any other project you’ve heard, straddling the border between pop, rock, electronica, and just about any other genre the member’s take interest in. This allowed for a varied and captivating set on a sonic level, which doesn’t even take into account the visual aspect of their show. You see, the artists in Beaty Heart are just as interested in the visual arts as they are music, and their live show features numerous pieces of original artwork meant to dazzle onlookers. Even their website it filled with fantastic specimens of these guys’ talented minds, officially making this act unlike anything else you’ve seen before.

Following Beaty Heart was the only American act of the night, electronic DJ Jim-E Stack. Beaty Heart was a tough act to follow, but fortunately Jim-E Stack more than rose to the challenge. In a world where many electronic artists rely on intricate light shows and gimmicks to keep the audiences attention, Jim-E Stack keeps it simple with a small DJ booth, a mixer, and a few controllers. For many DJs, these limitations are enough to cause boredom in the audience by the thirty minute mark, but tonight this would not be the case, simply because of the surprising depth of the music. Every layer of the complex electronica was purposefully created to add a specific texture to the track. The thumping bass lines, atmospheric vocal samples, and complex drum lines all bore testament to the talent of this DJ, and through variation combinations of these elements and more, the set was shaped into what might best be described as an intellectual dance party. Seeing as this is a very similar musical niche to that the headliner holds, it makes sense that the talented Jim-E Stack was chosen as opener, and he served remarkably in that capacity. By the end of his set, Marathon felt nicely filled and bustling with activity, which is no small feat for a room so large.

Fortunately, the break between bands wasn’t too lengthy, and soon after Jim-E Stack left the stage, London pop act Jungle took the stage. If you’re unfamiliar with Jungle, the group could probably best be described as a modern take on disco: the rhythms are more complex and varied than the first wave of disco, but the staccato guitar lines, back up dancers, and screaming synth lines are just as present as ever. It’s pretty easy to imagine that this type of music would go over quite well live, an assumption that would turn out to be resoundingly true. Jungle made extensive use of on-stage lighting, which highlighted the musical landscape and provided an almost ethereal presence to the band. The group had quite a dominating stage presence, though this isn’t particularly difficult to achieve in a band that brings a handful back up singers and two percussionists on stage. What is most surprising about the group is their young age: despite winning a Mercury award, the group has only been together since early 2013, and have yet to hit two years in age. One wouldn’t know this from simply watching the show however, as the group sounded tight and dynamic throughout their set. We suspect Jungle will only continue to take off during the next few years, as their high energy funk sound is basically impossible not to like. Luckily for us and the select group of Nashville music fans that made it out to Marathon last Sunday, we managed to catch that train early. Keep an eye on Jungle; this project is undoubtedly going places.

Even for a headliner as experienced as Bonobo, following the dance explosion that was Jungle must have been no easy task. With great resolve, however, the British electronic master took the stage and played a smattering of old favorites mixed in with a healthy dose of new music. Being the headliner, much of the audience had come solely to see Bonobo, and the crowd energy during his set rose to a high for the evening, peaking whenever the artist played hits, such as “Kierra”. If you’re familiar with Bonobo’s recorded music but haven’t had the opportunity to do so live, we definitely recommend it: Simon Green (aka Bonobo) is one of those artists’ whose tunes take on entirely new meanings live. To put it more bluntly, the subtle nuances in texture and intricate sampling work that makes his recorded music work is still present in the live show, but its underscored by thumping kick drums, dynamic filtering, and a mesmerizing light show. This all works together to frame songs in a  more danceable light, which definitely went over well with the crowd. Bonobo is one of those artists that don’t really bother taking the time to talk to the crowd, knowing full well that the crowd would rather dance and hear tunes than silly banter, and as such he kept the music coming from start to finish. One highlight of the set was the inclusion of a new single, which is slated to drop in just about two weeks.

While it was expressed in different ways, each of the artists who performed this evening did a fantastic job of translating complex recorded music into a fun, dance-friendly live show that still retained much of its musical intricacy. This is no easy task, but we were fortunate enough to see some of electronica’s finest minds at work, and the talent present was evident throughout the show. If any of these artists visit Music City in the future, we’ll be sure to let you know, but in the meantime, feel free to scroll through the gallery of photos from the evening posted below.