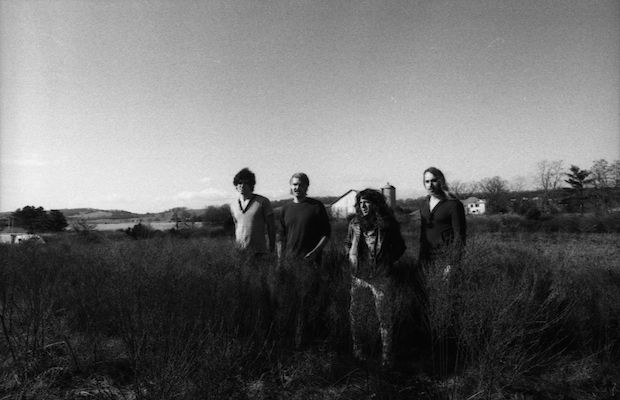 By now we hope you’ve heard, our live events production wing, No Country Presents, has taken up residence at Lower Broadway’s hippest new restaurant, lounge, retail, and event space, Acme Feed & Seed, where we’ve been bringing you a weekly, FREE, Tuesday night showcase, featuring some of our favorite emerging local talent. The curated showcase runs from 7:30 to 11 p.m. each week, and, so far, has featured everything from folk to funk to rock to indie. For our next installment, on Tuesday, Sept. 30, we are, for the first time, bringing you a three band bill: throwback rockers The JAG, rapper Mountainwalker, and Austin act Berkshire Hounds. Keep reading to find out all about them, and cancel any other plans you might have Tuesday night, because you’re coming to hang with us. Got it?

We first introduced you to The JAG ahead of our SXSW send off show early last year, but we’ll reiterate for the uninitiated. Bred in Mississippi but based in Nashville, the group harbor a strong retro sensibility; everything from their clothing style to logo to, of course, their sound is reminiscent of ’70s psychedelia, but not without a modern indie rock foundation and southern rock undertones. We dug their raw, edgy 2012 debut, Mississippi Acid Pine Highway Tour, and feel like they’ll be a perfect bridge between the folky, southern sound of Lower Broadway and the loud rock and roll we love so much.

Poet, author, trained jazz musician, and South Carolina native (now based in Nashville) Aaron Berg began making hip hop under the alias of Mountainwalker in 2011, and dropped his debut album, American Rhapsody, late last year. Channeling poetic, insightful lyrics and employing the help of talented and eclectic local musicians and producers, Mountainwalker approaches hip hop with a broad, boundary-pushing sensibility and uniqueness. He bears the distinction of being the first rapper to grace our Acme stage, and, from what we’ve heard about his live performance, he’s a must-see.

Hailing from Austin, Texas, Berkshire Hounds like to throw around the term “grunge” when describing their sound, and, while we certainly don’t disagree, indie pop would be a fitting description as well, fusing strong hooks, rock and roll energy, and horn flourishes. Their latest EP, Rock Bottom, is due out Oct. 7, so we definitely expect some new jams to make their way into the set. Since this is a three band show, the Hounds will start a little earlier than normal; get down to Acme, grab yourself a drink, and get ready for another fantastic Tuesday night!

The JAG, Mountain Walker, and Berkshire Hounds will perform Tuesday, Sept. 30, at Acme Feed & Seed. The show is 21+, music begins at 7:30 p.m., and, per usual, it’s totally FREE. Downtown PARKING can sometimes be an issue. However, if you’re willing to walk a few blocks, street parking is typically easy to find on the numbered avenues south of Broadway, or along Korean Veterans Blvd. Metered spaces are often free after 6 p.m.