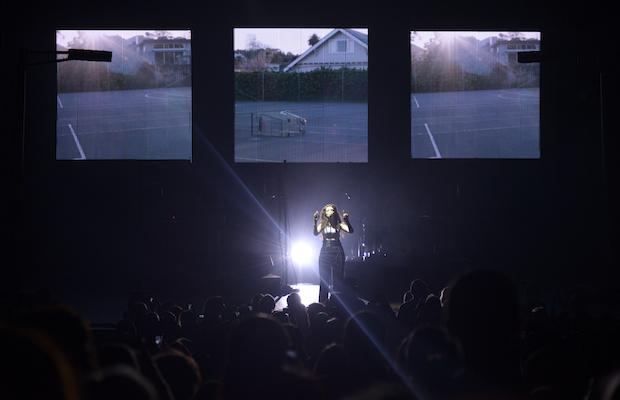 At just 17 years old, breakout songstress Lorde, real name Ella Marija Lani Yelich-O’Connor, is something of an anomaly. Holding the distinction of being the youngest solo artist to achieve a number one hit in the U.S. in over 25 years, the New Zealand native’s worldwide smash, “Royals,” has been inescapable since its 2013 release. And, while her rise to fame has been meteoric, and the tour cycle surrounding her debut album, Pure Heroine, comprehensive, it had not, before now, brought her to Music City. It was fittingly symbolic, then, that the singer’s first Nashville show should take place at such an unconventional venue: The Grand Ole Opry House. The Opry almost entirely caters to the Nashville tourist industry, hosting its own events nightly which highlight Nashville’s mainstream country indulgences. In a space like this, Lorde felt just as out of place and she does amongst the pop divas, rappers, and EDM artists with whom she currently shares radio space. And, just as she has on the radio, Lorde brought something special, innovate, new, and forward thinking to the typically safe, systematic Opry stage. Read on for our review. 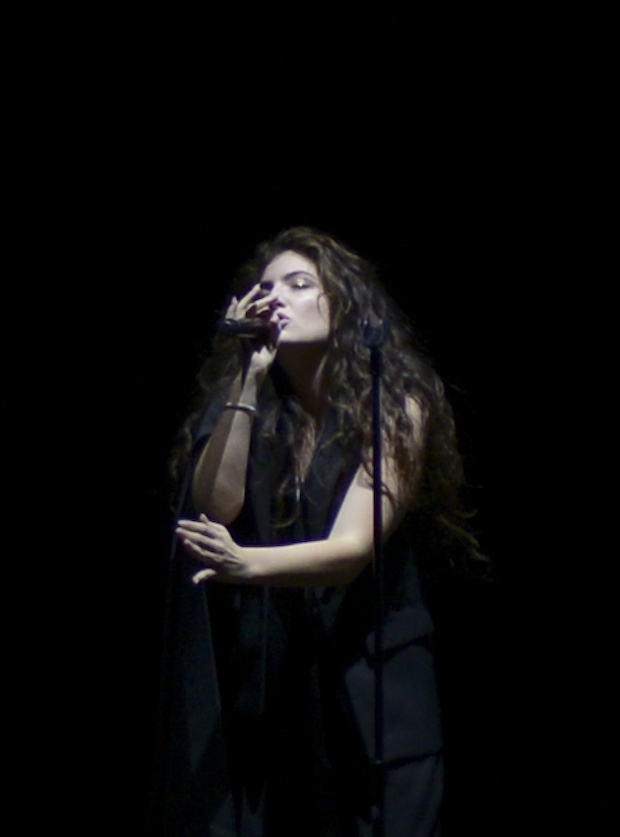 Following sonically well-selected but not perfectly scaled for Opry’s size act, opener Magical Cloudz, Lorde’s changeover was brief, and her staging, mostly draped in black, appeared minimal. Admittedly, I’m a fan of Lorde’s music, but, for me, it’s as much about her image, her independent attitude, and her substantive and artistically broad affect on teens who, I hope, will use her as a gateway to latch onto facets of music with longer-lasting and more thought-provoking appeal than many of Lorde’s contemporaries, which seals my intrigue. Lorde is, of course, the product of image crafting and calculation, but, nonetheless, oozes authenticity and, clearly, her way of performing and dedication to her craft could not be manufactured. A sea of dark-haired, black lipstick laden teens and 20-somethings screamed as the singer, alone and draped in a black robe and her signature MC Hammer-esque parachute pants, took the stage to perform minimalist renditions of “Glory and Gore” and “White Teeth Teens,” backed by strobe lights and letting each world crawl and sink into our minds with an overemphasized weight and meaning.

By the time third song, single “Tennis Courts,” came around, the curtains had dropped, an interactive three-screen backdrop had appeared, and Lorde’s band, a no-frills duo of a synth player and drummer, had emerged. This escalation set the pacing for the entire show, in fact, which would serve as something of a parallel to the singer’s career trajectory: a slow but powerful entrance, a big, transformative build, and an elaborate, self-referential and decadent climax. Act two, which saw Lorde trade in her black digs for a white outfit of the same style, kicked off with a cover of Kanye West’s “Flashing Lights.” An interesting choice to be sure, and one I thought landed especially well, but didn’t elicit the crowd response it deserved (to be fair, Lorde was merely 11 when that song was released, and it’s safe to assume that so were many of her fans). A later selection of lesser-known Bon Iver track “Heavenly Father” would receive the same lukewarm excitement. Alternating between trained, fluid efficiency (I got the impression she’d played this identical set a time or two), and impulsive, unpredictable energy, the singer felt, for the most part, up to the task of performing in the size room she’s graduated to, but, her occasional awkwardness and state of being stuck between pop singer and rock and roll frontwoman left things feeling a bit disjointed at times. Her appreciation and genuine gratitude were emphasized, at one point exclaiming her awe at playing on such a legendary stage, and expressing a desire to move to Nashville, a place she claimed made her feel at home. 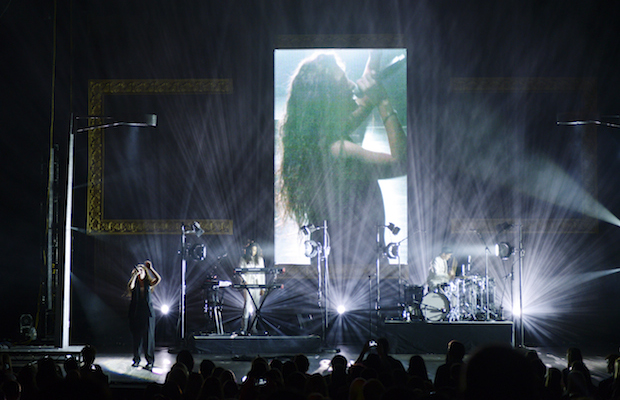 To start the show’s third act, or, rather, expended finale, Lorde used her platform to explore the affect of growing up on the road, and spoke to her young fans about the feeling of transitioning into adulthood. Launching into fan-favorite, “Ribs,” the show’s production hit an apex in tandem with the singer’s transcendent and magical delivery, erupting balloons and confetti throughout the sold out room. A quick disappearance would see a third and final outfit change, this time to a regal red, while the stage morphed to include a chandelier and marquee, an obvious and quickly gratifying lead-in to the singer’s most famous hit, “Royals.” Capitalizing on the energy (and doing her best to keep showgoers in their seats), Lorde quickly and epicly concluded the show with two final selections, opting not to perform a conventional encore. Barely cracking an hour, the set felt perfectly concise and gratifying, a magical glimpse at one of music’s most exciting up and coming singers in a moment where she matters in an extraordinary way, because none of her peers dare to so definitely blaze their own path, and to empower young fans to explore and to embrace their individually. As a performer, Lorde was delightful and, clearly, is own the path to being great. As an artist, she is exactly what the mainstream music world needs right now, and someone I hope will be around for a long, long time.