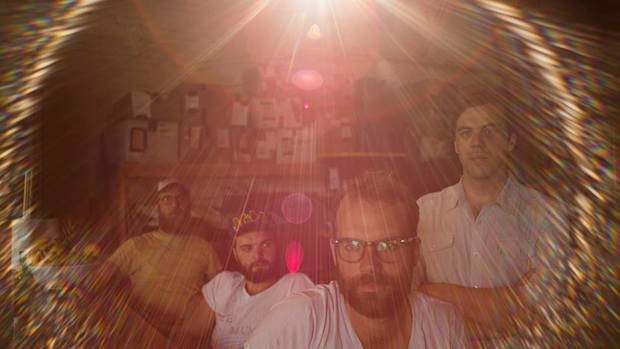 Drop whatever you have planned for tonight and get your ass to The Basement, because rock ’n’ roll indie folksters Quiet Life will be there to get you over the hump on hump day. We’ve been big fans ever since we saw them open at a sold out Portugal. The Man show last June, (read all about it here), and now they have a collaboration with Jim James, of My Morning Jacket, under their belts. Not only that, but we’ve heard tails that they just finished recording another full-length with Scott McMicken, of Dr. Dog, set for a 2015 release … so things are only looking up. Locals, via Montana, Guthrie Brown and the Family Tree will be throwing their alt-folk rock sounds into the mix, so for just $5 at the door you can’t beat it! The music should start about 9 pm.

For more on the bands, and that MMJ frontman collab, click on after the jump. For more info on their new album, stay glued to No Country, and even more importantly, go see some live music tonight Music City. Just because it’s a weekday it doesn’t mean you have to call it a night early. Not all that rocks falls on the weekend friends.

Hot on the heels of releasing a new EP last month entitled Housebroken Man, a follow up to their 2013 full-length Wild Pack, Quiet Life have been continuing their furious touring, now on their own, instead of in support of bands like Portugal. The Man, Dr. Dog and The Head and the Heart. They recorded the EP on the road, at five different studios and it features appearances by Cary Ann Hearst (of Shovels & Rope) and that Jim guy we mentioned before. At one of their sessions for the EP, it just happened that Mr. James was recording next door, and on a whim they sent him a tweet. Within a few minutes he’d joined the Portland roots-rockers for an impromptu jam session of Townes Van Zandt’s classic “Waiting Around To Die”. You can hear the proof below, and trust us when we say you want to see Quiet Life now, before they blow up.

Guthrie Brown is a self described “young buck”, hailing from Montana, on his band’s facebook page. He and his band The Family Tree now call Music City home, but they’ve brought their Northwestern alt-folk rock sounds with them. See what we mean below, and get to the show early so you came see and hear them for yourselves.

Quiet Life, and Guthrie Brown and the Family Tree will perform TONIGHT at The Basement. The show is 21+, begins at 9 pm, and tickets are available for $5 at the door.