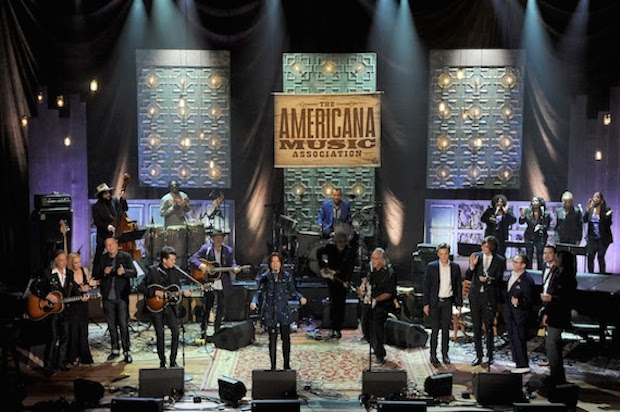 After a monster year supporting the much acclaimed Southeastern, it is not surprising that Jason Isbell made a clean sweep of the Album Of The Year, Artist Of The Year, and Song Of The Year categories in last night’s awards ceremony at the Ryman Auditorium. Group Of The Year was claimed by The Milk Carton Kids, and Buddy Miller took home the prize for Instrumentalist Of The Year, while the exploding Sturgill Simpson snagged the honors of Emerging Act Of The Year.

Read on for more about the Honorees Loretta Lynn, Flaco Jimenez, Taj Mahal, Jackson Browne; the numerous performances, including a surprise appearance from Patty Griffin and Robert Plant; and the other honorees on what was a night to remember last night as Americana Fest officially kicked off with a bang!

The night got off to a blistering start with Ms. Loretta Lynn accepting the Lifetime Achievement Award For Songwriting and performing her hit song “Coal Miner’s Daughter”, before heading straight out to climb on a bus for an 800 mile road trip to continue her fabulous journey as an American icon.   Standout Rodney Crowell took to the stage with Ry Cooder, and sang the sentiments of the crowd after Lynn’s exit in his track, “God I’m Missing You”.

The show was littered with tracks from this years nominees including Parker Millsap, The Devil Makes Three, Valerie June, Hurray For The Riff Raff, Robert Ellis, Roseanne Cash, Hard Working Americans, Sarah Jarosz, and a standout “testament at the mother church” moment from St. Paul & The Broken Bones.

The much rumored appearance of Patty Griffin and Robert Plant to perform Griffin’s “Ohio” came to fruition, and was a highlight to many of the packed audience.  However, Jason Isbell’s “Cover Me Up” with wife Amanda Shires in accompaniment, quickly reminded folks why he was the big winner of the evening.

The other honorees of the evening included Mr. Flaco Jimenez, who graciously accepted his Lifetime Achievement Instrumentalist award before sitting in with long time collaborator Ry Cooder for a Norteño classic “Ingrato Amor”.  Keb Mo showed off his sense of humor in a heartfelt introduction for Lifetime Achievement in Performance honoree, Taj Mahal, who even had the all-star backing band cheering along with his killer take on “Statesboro Blues”.  Jackson Browne sent the crowd away satisfied at the end of the night as he claimed the Spirit Of Americana, Free Speech In Music honors.

The State of Mississippi was honored with a cover of Willie Dixon’s “I Want To Be Loved” by Magnolia State native Cassandra Wilson. Fellow Mississippian, Marty Stuart honored the Father Of Country Music, Jimmie Rodgers, with a cover of his classic track “No Hard Times”.

It was this writers first experience with the magic of the Americana Awards Show, and I now understand all of the hullabaloo.  It was an incredible night packed from start to finish with the absolute cream of the crop in American music.  We’ll be bringing you more coverage next week from the rest of AmericanaFest.  In the meantime, get out there and be a part of the rapidly growing Nashville event.