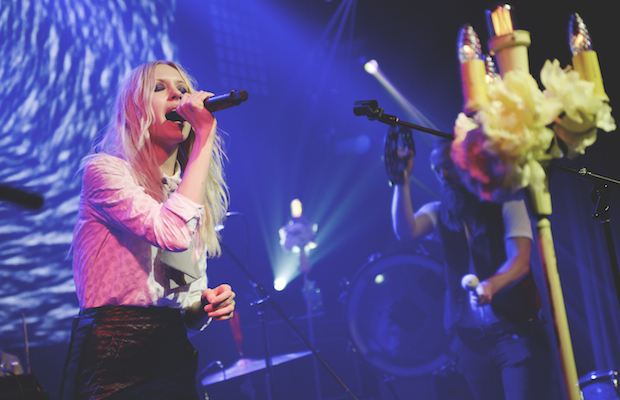 It’s always tricky when an artist whose identity is inextricably linked with a band, and a family band at that, pivots to a solo outlet, and, often, it can be received with mixed results. In the case of Stacey King (né Stacey DuPree), and her solo(ish) vehicle, Sucré, an incredibly talented singer has not only found her voice in a different a relevant new outlet, but has also found an audience eager to sustain a second project. Her primary endeavor, of course, is Eisley, a Texas indie pop collective with her siblings, which King became apart of at age 8. And, while Eisley is not likely going anywhere anytime soon, it’s understandable how King, now 25, would want to explore her own musical identity without the influence of her band of 17 years. Originally conceived as a pseudo-band itself, along with Stacy’s husband, Mutemath drummer Darren King, and talented arranger and multi-instrumentalist Jeremy Larson, both of whom have since stepped back into producer roles, Sucré is now, for all intents and purposes, a solo alias for Stacy herself. Although the project has been on my radar since Stacy’s first fantastic album, A Minor Bird, in 2012, and I’ve seen her perform (and have even been on tour) with Eisley on numerous occasions, this week was my first chance to see Stacy as Sucré, and, along with openers The Honey Trees and Merriment, it was as magical as I could have hoped. 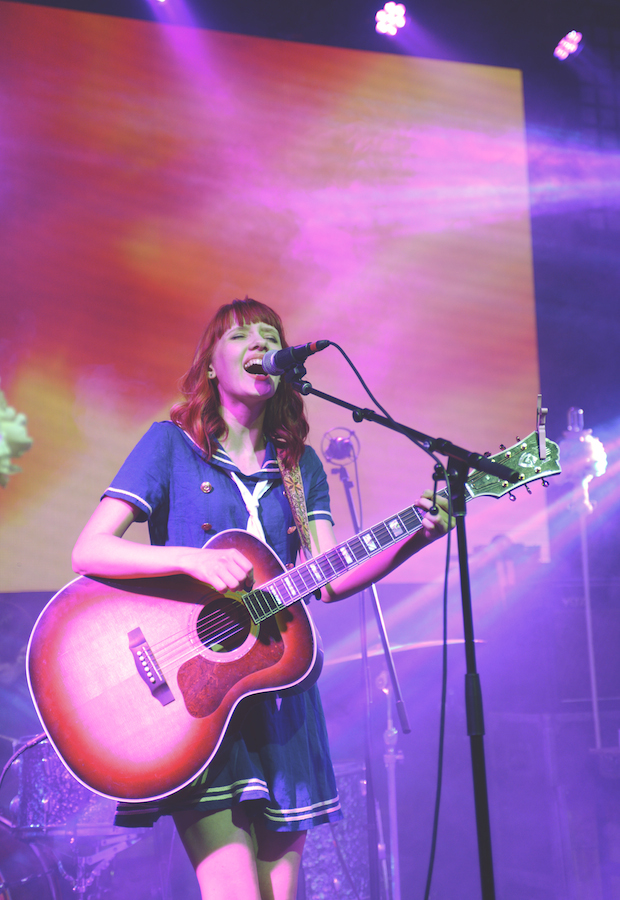 Primarily comprised of King’s younger siblings, Christie and Collin DuPree, indie pop/folk act Merriment are a pleasant and dependable act who often support their older siblings’ projects on tour. As such, I’ve seen them somewhere in the neighborhood of 20 times. Usually, a number that high would be reserved for a band I’m a superfan of, lest I get incredibly bored. Yet, it’s something about the charm, the pleasant arrangements, the heavenly vocals, and the unparalleled chemistry that has me equally captivated by and in awe of Merriment show after show. The moment they took the stage at 12th & Porter, I delighted in the fact that they had a full band’s worth of accompaniment, a setup I’ve only seen one time prior. While their ability to impress largely acoustic is no small feat, the fleshed-out arrangements of the duo’s debut album, Sway, begs to presented will the full band treatment, and Wednesday night was undeniably enhanced by this setup.

Anchored by the angelic voice of frontwoman Christie, and propelled by the understated and tasteful guitar work of Collin, Merriment played with the most confidence and precision I’ve ever seen them exhibit. These years of touring, growing up on the road effectively, have helped shape and form them into performers seasoned beyond their years, and their sound, a refreshing amalgamation of pop with unpretentious folk sensibilities, is one that benefits so much from being experience in such an intimate and great sounding room. If the world were fair, Merriment would be one of the biggest up and coming bands making music today, but, for the time being, those of us who know and appreciate their talent get to revel in being apart our own little club. 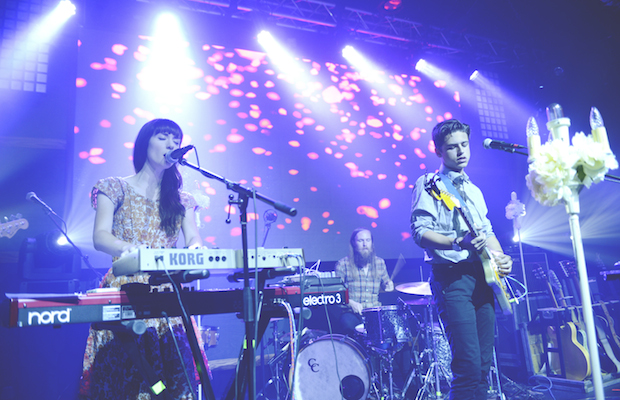 Following Merriment, and breaking the DuPree family connection (but not the Sucré connection, as they share a producer, Jeremy Larson), were a band whose name I’ve often heard floated around, but, to my recollection, had never actually listened to prior to their performance: The Honey Trees. Apparent friends of Stacy’s for nearly a decade, the duo hail from San Luis Obispo, Calif., and, like Merriment, recruited the help of a live band (the same bassist, in fact) to complete their sound. My immediate take is that the group bore quite a resemblance to Eisley in style, enhanced, I’m sure, by the unwavering vocal harmonies of band members Becky Filip and Jacob Wick. With synth flourishes, violins, and additional percussion, The Honey Trees conjured a layered, lovely flavor of dreamy indie pop, and, though I was hearing all of their material for the first time, they produced a sense of familiarity, which kept me intently focused on every note.

The Honey Trees have been making music together together for quite a number of years, and have developed an obvious rhythm and sense of connectedness. They also have an attention to detail that few groups can claim, sinking four years of work into their recent debut full-length. It’s that attention to detail and discipline, I think, that makes them come across live in such a compelling way, and allows their eclectic array of influences, spanning across genres and decades, to spill over with a practiced balance. The end of their performance came all too quickly, but, fortunately, it wouldn’t be long until I got the opportunity to watch them place once more… 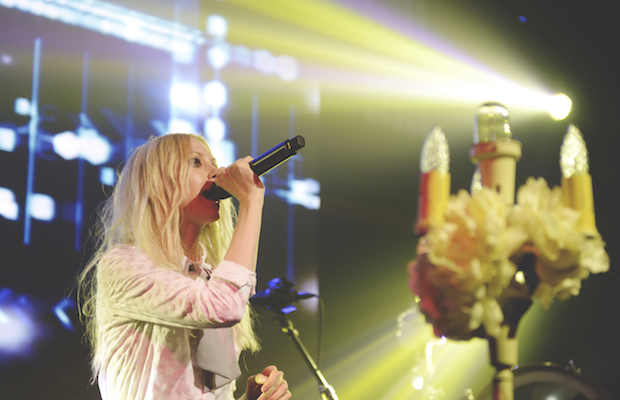 Returning to the stage, The Honey Trees (minus their bassist, who received a well-deserved break) assumed the role of backing band for Sucré, a task formerly given to Darren King and Jeremy Larson on the project’s 2012 mini tour. And, though those are certainly big live performance shoes to fill, they couldn’t have been better selected for the task. With Wick on drums and The Honey Trees’ drummer handling auxiliary percussion duties, the group played along to dense, sweeping tracks of orchestral arrangements and keyboard flourishes, which, for any lesser performance, might have felt like a cop-out, but was employed in such a tasteful way, a balanced backbone to Stacy’s beautiful voice, that it felt well-timed and organic (and, let’s be real, it would take a 15-piece band to recreate Jeremy Larson’s orchestrations). If you’ve never seen Stacy live, then you can’t full appreciate the angelic quality about her stage presence, but, truly, it is indescribable. Her voice is nearly pitch-perfect and her powerful ability to project with a deep-seated emotional resonance puts here in a class of singers that few other performers on earth can claim.

In Eisley, Stacy is a piece of five very talented and equally balanced parts. In Sucré, Ms. King is front and center, and that focus is much-deserved. When allowed to let her musical tendencies run wild, Stacy’s sound adopts an ethereal, dream-like, and other-worldy quality, and, when untethered from her typical keyboard duties, the songstresses exhibits an extra layer of showmanship (or showwomanship, as it were) which proves she’s just as comfortable in the spotlight as she is in the corner. Sucré’s stage was decorated with white, candelabra-esqe lamps, which were timed with the mood of the set, a tasteful and totally fitting display in minimalist production design. Even with the arena light-filled-tiny-stage ambience of 12th & Porter, which includes a gigantic flashing LED array, Stacey’s performance adopted an intimacy and personal affect which had me (and the rest of the crowd) feeling like I was receiving my own personal show.

Running well past midnight, Sucré’s set was comprised of nearly every song from her debut as well as new EP, Loner, and, much to my delight, the packed and enthusiastic crowd seemed to know every word. With any solo project, especially a relatively untested one, crowd response and draw is the hardest thing to predict, and it’s always heartwarming to see passion in early adopters. Closing out the night with an acoustic encore, Sucré performed two covers, “You And Me” by Penny & The Quarters and Stevie Nicks’ “Silver Springs,” which, fittingly, saw Stacy step behind the piano for the first and only time of the evening. I knew I was a Sucré fan before Wednesday, and, with as many times as I’ve seen Eisley, I knew that Stacy was more than capable of putting on an amazing performance, but, finally, seeing the project in action, and hearing such beautiful songs realized in such a perfect way validated Sucré to me in a way I didn’t even think possible. I hope, for the sake of music in general, that more people catch on to what Stacy King is producing, because it is unparalleled.