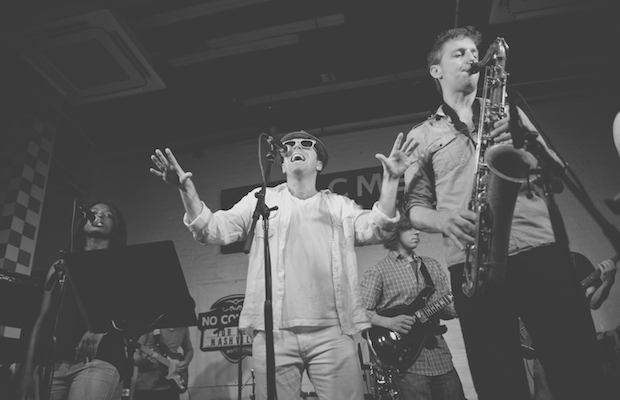 Along with our good friends over at Acme Feed and Seed, we’ve spent the last several Tuesdays bringing you the best in Nashville’s local music talent, and last night was no exception. The showcase featured just one band, Marquee Mayfield and the Mr. Moons, but was a blast all the same. We have a recap of the event and some pretty great photographs of the festivities after the jump; all you gotta do is click through to check them out! Also, add next week’s showcase, featuring The Oak Creek Band, to your calendars (as always, it will begin at 8 p.m., and is free to the public).

Like any decent night at the Acme, music was happening on all three levels, but everyone who was anyone knew that the ground floor was the best spot to be, as local RnB act Marquee Mayfield and the Mr. Moons were set to play through a two hour set beginning at 8 p.m. Even before the music kicked off, the downstairs was packed, and people were quite curious to see how an act which features ten musicians would even fit on the stage, let alone play as cohesive unit. The answers to these questions came soon enough, and the crowd was reassured that not only can ten people fit on stage, but can actually sound quite tight and well rehearsed.

Those unfamiliar with Marquee Mayfield would do well to educate themselves on the act; between their expressive vocals, impressive instrumentation, and upbeat attitude, the group hold the unique ability to play in just about every form of pop music from the last fifty years, including Motown, reggae, rock, and RnB. This wide range of influences was present in both the group’s original tunes and the numerous covers they chose to play last night, which covered everything from “Express Yourself” to Michael Jackson to lots and lots of Stevie Wonder. All of the selections went over quite well with the crowd, and even the restaurant-esque setting of the first floor of the Acme, a number of individuals were seen dancing. In fact, we actually caught one of the waitresses getting her groove on, a rare sight for a music venue employee. This all speaks to upbeat, fun attitude with which Marquee Mayfield and the Mr. Moons conduct themselves; it’s an infectious mentality that definitely seeped into the public’s mind. All in all, the event was a definite success, and we hope to see all of you out again next week!