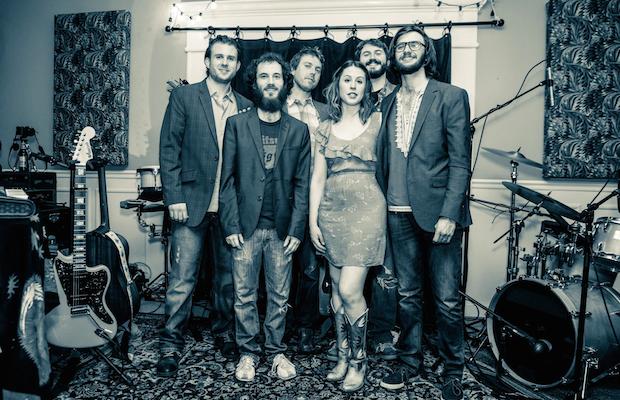 By now we hope you’ve heard, our live events production wing, No Country Presents, has taken up residence at Lower Broadway’s hippest new restaurant, lounge, retail, and event space, Acme Feed & Seed, where we’ve been bringing you a weekly, FREE, Tuesday night showcase, featuring some of our favorite emerging local talent. The curated showcase runs from 8 to 11 p.m. each week, and, so far, has featured everything from folk to funk to rock to indie. For our next installment, on Tuesday, Sept. 16, we’re keeping things going with Americana/folk/rock/indie pop group The Oak Creek Band. Keep reading to find out all about them, and cancel any other plans you might have Tuesday night, because you’re coming to hang with us. Got it?

Hailing from Arizona and formerly based in Denver, Nashville transplants The Oak Creek Band began when now husband and wife duo Jenna and Daniel Watters, who initially met in middle school, began singing together upon graduating from high school. The pair relocated to Colorado and put together what would become The Oak Creek Band, going on to release two EPs and to hone their performance skills on the road, before relocating to Music City in early 2013. A debut full-length, XI (Eleven), would follow, propelling The Oak Creek Band to even greater critical acclaim. Combining elements of folk, Americana, indie pop, and soul, the group have perfected a dense, harmony-rich sound that draws from a wide array of influences, but stands as wholly original. Channeling thoughtful, meaningful lyrics and pleasant, welcoming melodies, The Oak Creek Band are one of Nashville’s most promising up and coming acts, and their musical range and road-worn performance chops make them a perfect candidate to entertain you for hours at Acme. Don’t miss out!

The Oak Creek Band will perform Tuesday, Sept. 16, at Acme Feed & Seed. The show is 21+, music begins at 8 p.m., and, per usual, it’s totally FREE. Downtown PARKING can sometimes be an issue. However, if you’re willing to walk a few blocks, street parking is typically easy to find on the numbered avenues south of Broadway, or along Korean Veterans Blvd. Metered spaces are often free after 6 p.m.