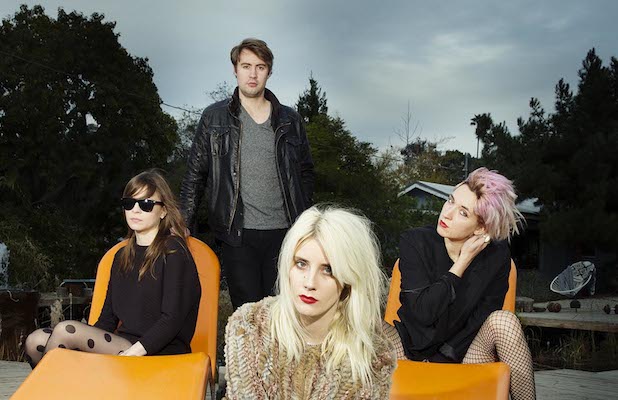 We’ve been raving about White Lung since first catching them at Bonnaroo (an unlikely place, to be sure) in the summer 2013, and TONIGHT at The End, we’re thrilled to have a chance to check them out again in a more properly intimate, punk-approproaite space. While we’re not entirely sure, this appears to be the Canadian punk/hardcore group’s first-ever Nashville performance, and they’re bringing Mormon Crosses and Gambit along for the ride! Tickets are still available for $12, so, if you’re a fan of quality, DIY-rooted punk with a femme flair, you’d be crazy to pass this one up. Keep reading for more!

Meshing influences of punk, hardcore, post-punk, and alternative, Canada’s White Lung sprung out of the Vancouver DIY scene and rose to international acclaim with their sophomore effort, sorry. Their latest (and first via Domino), Deep Fantasy, marks White Lung’s most polished, accessible, and dynamic release yet, and has earned them further critical acclaim, seemingly propelling them to the cusp of mainstream attention without the need to comprise their musical integrity. Channelling lyrics about addiction, sexuality, body dysmorphia, and more, the female-fronted quartet have proven themselves one of the scene’s fiercest, most substantive bands, and they have honed a live show from years of independent touring to match that reputation.

Providing direct support, fellow Canadians Mormon Crosses fall more in the realm of art punk, taking a lo-fi, experimental approach while channeling more traditional elements of punk and hardcore. It’s not hard to see why White Lung selected them as tour mates: their ideals and aesthetic are very much in sync, and Mormon Crosses, at this point in their career, remind of us a White Lung circa 2008.

We’re not exactly sure which Gambit it is that is opening the show, but would assume it’s not one of the handful of electronic artists or DJs who perform under that mantle. Only one way to find out for sure: show up early!