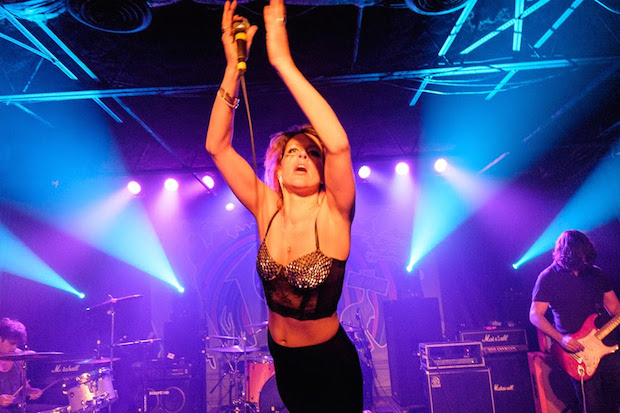 While Live on the Green has pulled together an incredible lineup through the weekend, if, like me, you’re allergic to the outdoors, there’s a great show happening at the diviest of East Nashville dives, Foobar, on Saturday night. The bill features female-fronted rockers from Savannah, Georgia CUSSES, one of our new favorite punk bands SECRETCLUB, eclectic former cover band The Wooly Mamas, and acoustic rapper Brian Allen Thompson playing inside. That lineup is all over the place in term of genre, and it’s more often that’s a good thing than a bad one. There will be something for everyone at this show, so if the weather turns bad or if you just hate the sun, Foobar will be the place to be that’s not Live on the Green on Saturday night.

The female-fronted three-piece out of Savannah, Georgia CUSSES plays hard rock with radio-friendly melodies that have been enough to get their video for “Don’t Give In” some airplay on MTVU. The song is from their self-titled record released back in 2012, and the group has been working hard to expand outside their very supportive hometown by bringing their high-energy live show around the country.

The local transplant from Boston Brian Allen Thompson, or BATtheRapper as he sometimes goes, plays acoustic hip-hop with uplifting messages reminiscent of Macklemore.

The Wooly Mamas are an eclectic local trio with influences from grunge to country to Americana to the blues. Their set on Saturday is promised to be an acoustic one, so we’ll likely hear their softer side, similar to the new song below. The group is also very well-versed in terms of covers, so they might just end up playing something you’ll recognize.

We’ve already told you a bit about the new punk band SECRETCLUB after seeing them play at the East Room back in July, and if you’re into New York style punk a la the Ramones and the New York Dolls, you have to check them out. The secretive band still only has an Instagram for us to share with you, but just trust us on this one.

CUSSES, Brian Allen Thompson, Wooly Mamas, & SECRETCLUB will perform Saturday, September 6 at Foobar. The show is 21+, begins at 8 p.m., and tickets are available for $5.