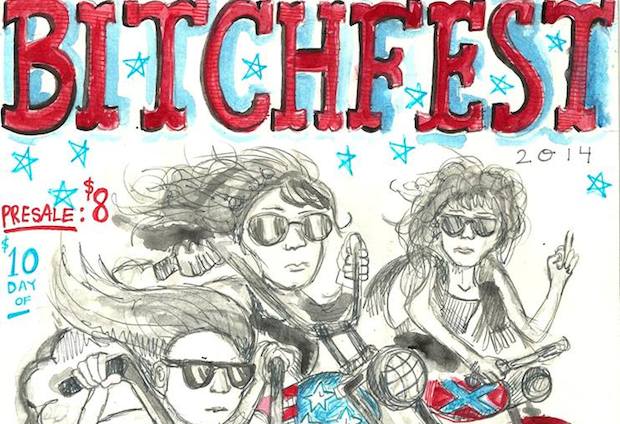 The fourth annual Bitchfest was held at Charlie Bob’s over Labor Day weekend, and the local cock-rock playing ladies Thelma and the Sleaze put together an incredible lineup this year, including the Satanic gangster rapper Chopper Girl, hard-hitting all-girl outfit Motherfucker, freaky goths We Are Hex, and the lingerie-clad post-punks Tiger Sex, all together at an event created to support women in music. There was a diverse lineup of female-fronted bands, there was information from local feminist organizations, and there was blood.

Read our full review of what we’d be willing to bet was the most punk rock thing to happen in Nashville all weekend.

Despite the hurricane-level rains that poured for hours beforehand and almost the entirely of the mini-festival, Charlie Bob’s was packed with one of the most diverse crowds you’ll find at a local rock show. This was not a room full of women with unshaven arm pits, but an audience equally split between the genders and across ages as well. There were a lot of older men proudly sporting Thelma and the Sleaze t-shirts, and the inclusive vibe of the crowd was something not often found at these political-type events. It was enough to almost bring tears of joy to the eyes of this rock and roll-loving feminist. If you’ve never been to Charlie Bob’s, it’s basically a 1950s style diner that just got a liquor license and inexplicably decided to decorate the patio with a tropical theme. An extremely charming dive, if not the best-equipped sound-wise.

The proto-punk three-piece Tiger Sex were the first to play, and fell victim to some of those sound issues. It didn’t help that they were shoved into the corner while others set up in the bigger room, but the most terrifying frontwoman of the evening (and that’s a feat for Bitchfest) made an impression despite the fact that her vocals weren’t loud enough, by running around the bar clad in lingerie, screaming in everyone’s faces. She looked like a teenage runaway prostitute and appropriately had tiger stripes tattooed on her ass cheeks. While the drummer and guitarist played early punk, garage rock noise she hit herself in the head with the microphone, danced on the bar, and ran into the other rooms to assail the diner-goers, all while drinking from a flask tucked into her panties. Their set ended with a cover of The Stooges’ “TV Eye,” their single “Prostitution,” and a kiss-off apology for not being able to hear her. We certainly saw her, though, and it’s doubtful anyone is going to forget about her.

The all-girl trio from Athens, GA Motherfucker played next, jamming straight through their set with the insanely hard-hitting drummer Erika Rickson hardly allowing singer/guitarist Erica Strout a break to take a sip of her beer between songs. Motherfucker were the reason that our ears rung for two days after the show and there was genuine fear that someone was going to get hit in the face with a broken drum stick courtesy of Rickson’s pounding. The girls jammed through half an hour of dissonant hard rock and utilized some confetti cannons for good measure.

We Are Hex are a four-piece of scary goths from Indianapolis with a female singer reminiscent of a more confident Joey Ramone on some nasty, weird drugs. She sang into a megaphone and got into the audience members’ faces while the band played noisy goth-punk influenced by what the band says is “skin rubbed raw by a pleasant sin.” That’s kind of how our eardrums felt after they were done playing.

The demonic gangster rapper from Memphis Chopper Girl added some genre diversity to a bill filled with rock bands. Hip-hop is perhaps the one genre where women are even more under-represented than rock and roll, so putting a girl rapper in the lineup was a great move for Bitchfest from both a musical and a political standpoint. Chopper Girl wore black leather, wrapped the mic cord around her neck, and doused herself and willing audience members in fake blood. She referred to herself as “the motherfucking wicked witch,” rapped about zombies and the devil, sold voodoo candles as her only merch, and threatened to kill all of us.

All-girl trio Thelma and the Sleaze closed out the night with their brand of Detroit-influenced garage rock, including part of a cover of The Stooges’ “I Wanna Be Your Dog” as well as songs from their brand-new EP Heart Like a Fist. The Bitchfest-organizers’ hearts were warmed that such a good crowd turned out for the event, and that crowd was very excited to see them. Frontwoman Thelma rolled around on the floor while ripping into classic rock guitar riffs and they were the only group at the show where the audience seemed familiar with their material, singing along with some of the songs. Their onstage banter was also very rock and roll, consisting of questions as to whether the bassist was too drunk to play certain songs and tales of annoying lovers that were kept only for their skills at “eating ass.” The band is headed out for a tour of the west coast soon, but in the meantime you can pick up Heart Like a Fist and eagerly await their return home.