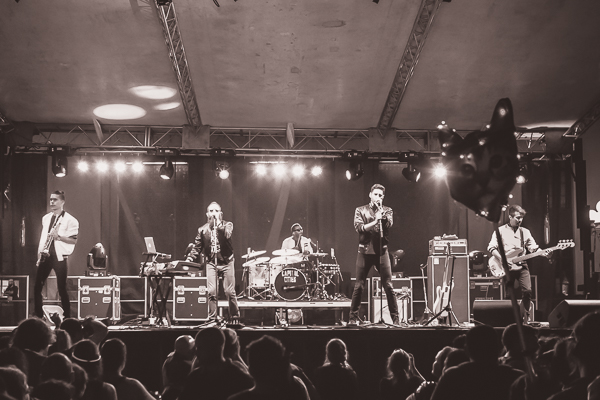 There aren’t too many things that are more of a bummer than heavy rain during an outdoor show, and yet this was the exact situation the organizers of Live on the Green were tasked with last Thursday, Aug. 28. It was the third week of the free concert series, set to feature Capital Cities, The Features, and All Them Witches, and despite, the rain and lightning delays, we have to say that the crowd still managed to have an absolute blast. 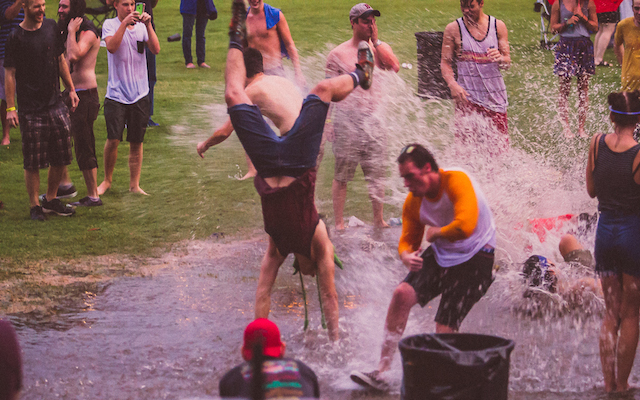 It was actually still dry when the first act of the evening, All Them Witches, took the stage just before six. It shouldn’t be a surprise that we’re big fans of this local psychedelic four-piece, who actually played our Christmas Caroling party way back in the day. Since then, the group have only refined and strengthened their live act, and it would be safe to say the band came across as true professionals this evening; they maintained energy throughout their set, and, while no one was happy to see the band have to take a break for the weather, they still managed to manipulate the emotion of the audience into having a fantastic time all the way up until their set was called. 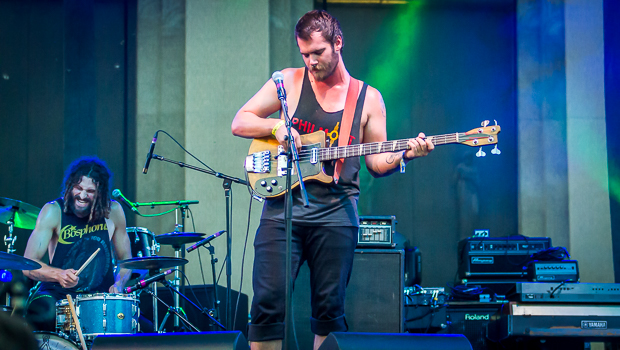 All Them Witches are a live band in the truest sense of the phrase; between their affinity for longer instrumental jams and the extreme dynamic range employed throughout their set, this is definitely a band that needs to be seen to be believed. Of course, that doesn’t mean we’re discouraging you from picking up their newest album, Lightning at the Door, which drops on Sept. 19. Despite not getting to play a complete set, All Them Witches melted faces with the few tracks there were able to perform, and we definitely recommend checking them out next time they play to get the full experience.

Next up on the lineup were local rock veterans The Features, who took the stage following the rain delay. Sadly, their set was cut short as well, but that didn’t stop them from absolutely killing it with what little time they were given. Having played together since the mid-’90s, The Features have definitely experienced worse happenings than a rain delay during their extensive time spent on the road, and the group did a fantastic job maintaining a hyped-up and professional attitude towards their show. With the audience having scattered towards whatever cover they could find, the upbeat sounds of the Features were exactly what was needed to draw the crowd back in, and, by the end of their set, things were back on track for a fantastic if soggy evening.

The Features. Photo by Brian Hill.

Sadly, the group’s set was only six songs long, but, if you liked what you heard, be sure to catch a full-length show in the future.  We’d also like to give a shoutout to the fans that were there from the beginning of the Features’ set. The rain was still coming down pretty steadily at that point, but a brave portion of LOTG attendees ignored the weather and proceeded to get down like they never had before. This type of positive mentality is exactly the sort of thing that makes a live show fantastic,  and it’s quite reassuring to see that kind of commitment to music coming out of Nashville.

The only band that got to play a full set were the evening’s headliners, Capital Cities. The duo (who perform live with a four person backing band) have had huge commercial success as of late, and you’ve definitely heard their hit track “Safe and Sound” in a commercial or on the radio recently. That being said, there’s a certain energy the band brought to their live performance that simply cannot be translated through any other medium. Between their silly little dance moves and genuine talk with the crowd, the group come across as pure, family friendly fun. This definitely lends an appealing edge to Capital Cities that few other bands can boast, and it helps to connect with audiences of all ages and backgrounds. This, we believe, is Capital Cities’ most distinguishing feature, and that which has brought them a heaping helping of success: no matter your life story or background, it’s hard to deny that their poppy tunes aren’t a ton of fun to listen to. 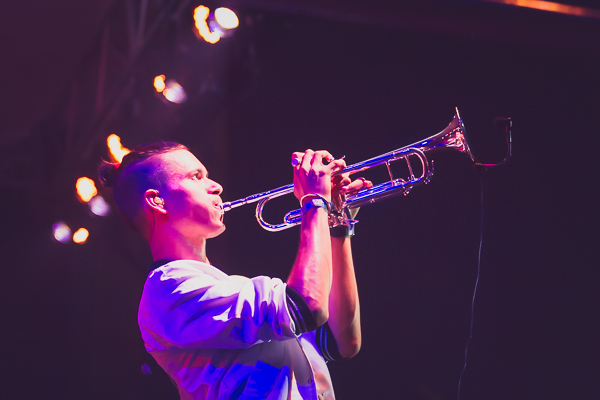 This little theory of ours was proved correct at Live on the Green a few days ago, as the audience was going absolutely ballistic during their set. It was a lot of fun getting to see residents from across Nashville and Middle Tennessee come together for a task as noble as dancing to some fun tunes. The group definitely played a tight set, and we loved getting a chance for them to bring some of that Los Angeles sun here to rainy Nashville. It was a fantastic end to a great, albeit soaking Live on the Green.

Don’t forget that next week’s installment of Live on the Green will actually be a three day festival, featuring a number of different fantastic acts, including Cage the Elephant, Jake Bugg, The Wild Feathers, and many, many more. It’s going to be a blast, and, as always, will be completely free to the public. We’ll have more details as the weekend moves closer, but be sure to keep this thrilling event on your schedules next weekend!