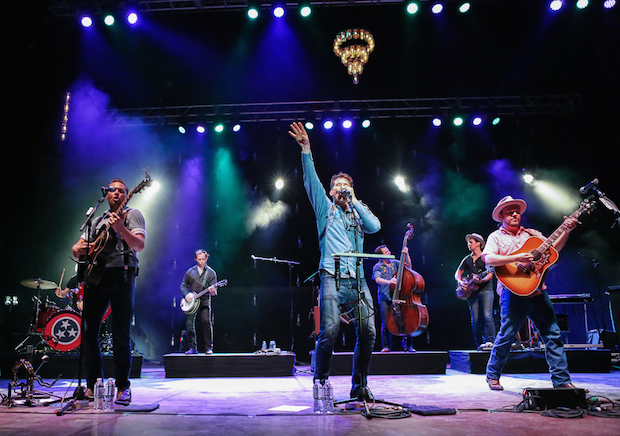 Hometown favorites Old Crow Medicine Show played to a sold-out crowd at the outdoor amphitheater The Woods at Fontanel on Saturday night, packing in a rowdy crowd despite a rainy forecast and humidity that left the air thick enough to cut with a knife. This was the string band’s first official show on the heels of their new record Remedy, released earlier this summer, and they made it plenty clear they were glad to be back in their hometown. Americana husband-and-wife duo Shovels and Rope opened, blowing the crowd away with their chemistry and hopping between a variety of instruments through their set. There were lovely country songs about the Cumberland River from both groups.

Read the full review of the stormy, Americana-filled night with photos after the jump.

Openers Shovels and Rope are from Charleston, South Carolina, but spend lots of time in Music City and are about to release their new album, Swimmin’ Time, on Dualtone Records. It was clear there were a lot of long-time fans of the duo in the audience, as a decent chunk of the crowd was singing along even when they dug into older material and played the first song they ever wrote together. Michael Trent and Cary Ann Hearst make enough noise for four people at least during their live show, with both playing multiple instruments and singing on almost every song. They split duties at the drum kit about equally during the set. Not only did both sing while playing drums, but Michael played guitar while playing the drums with his feet, and Cary Ann played a small keyboard with her right hand while covering the drum parts with her remaining appendages. Their live show was impressive, to put it mildly.

Cary Ann grew up in Nashville, and while their music is highly influenced by country and bluegrass, it also has elements of R&B and the blues and rock and roll. Trent’s fuzzed-out hollow body was at moments reminiscent of a certain Nashville transplant who also built his career in a male-female duo. And they finished their set with the great rock and roll tribute “Hail Hail” from their first record O’ Be Joyful with Cary Ann saying, “Thank god for country music, but… Hail, hail rock and roll!” It was a rock and roll moment of the opening act nearly upstaging the headliner, and the crowd didn’t want them to leave.

The weather, which wasn’t great to begin with, got worse between sets. But the rain didn’t dampen the crowd’s enthusiasm by the time Old Crow Medicine Show took the stage, opening with the new song “Bushy Mountain Conjugal Trailer.” Frontman Ketch Secor made as many Nashville references as he possibly could squeeze in throughout the show, mentioning the specific neighborhoods each member of the group was from, telling stories of houses where he used to live, and referring to 12 South as “the land of the $14 hamburger.” He said that the group is so proud to be from Tennessee that they put the Tennessee flag on the cover of their new record and bragged about being new members of the Grand Ole Opry. Secor is a consummate frontman; a great musician who isn’t too cool to put on an entertaining show.

They played several songs from Remedy, but peppered the set with material from throughout their career, much to the approval of an audience obviously full of long-time fans. Secor told the story of how their re-write of the Bob Dylan outtake “Wagon Wheel,” which was made famous by mainstream country singer Darius Rucker, led to another collaboration with the legend for the new album. Though there were “37 years between the pen strokes,” Old Crow co-wrote their newest single “Sweet Amarillo” with Dylan and played it in Nashville for the first time on Saturday night.

Towards the end of their set, Old Crow brought Shovels and Rope out to play a couple covers with them, and at this point the weather started to get a little unsettling. They played Elvis Costello’s “(What’s So Funny Bout) Peace, Love, and Understanding” for the night’s second pretty great rock and roll moment led by Shovels and Rope, as well as the folk standard “C.C. Rider,” all while the wind swung the lights around and lightning crackled. To finish out the night, Old Crow played an obligatory “Wagon Wheel,” which has become their most popular song through Rucker’s version. Secor then held up his bow like a lightning rod and informed the crowd that they were going to have to cut their set short due to the incoming dangerous storm. They finished up with a rollicking “Cocaine Habit” before we all rushed to our cars.

Old Crow gave their roadies a cardio workout by running instruments across the stage between each song and sometimes mid-song for every member of the band to show off their multi-instrumentalist skills. Secor it seems can play every hillbilly instrument you can imagine while dancing and telling some cheeky anecdote. And while he stole most of the spotlight, almost everyone else got a chance to sing at least one song and play at least three instruments. Their cutesy hillbilly act aside, Old Crow have always been one of the most authentic, and funniest, acts to come out of the new folk revival. Place them next to other bands that have had more popular success playing folk music (ahem, Mumford and Sons) and everyone else sounds not only annoyingly serious, but also bordering on phony. If you want hillbilly music, Old Crow Medicine Show is the real deal, and the crowd at the Woods on Saturday night knew it.