[Preview] String Theory: A One Man Show About Music @ Bongo After Hours on August 18 & 25 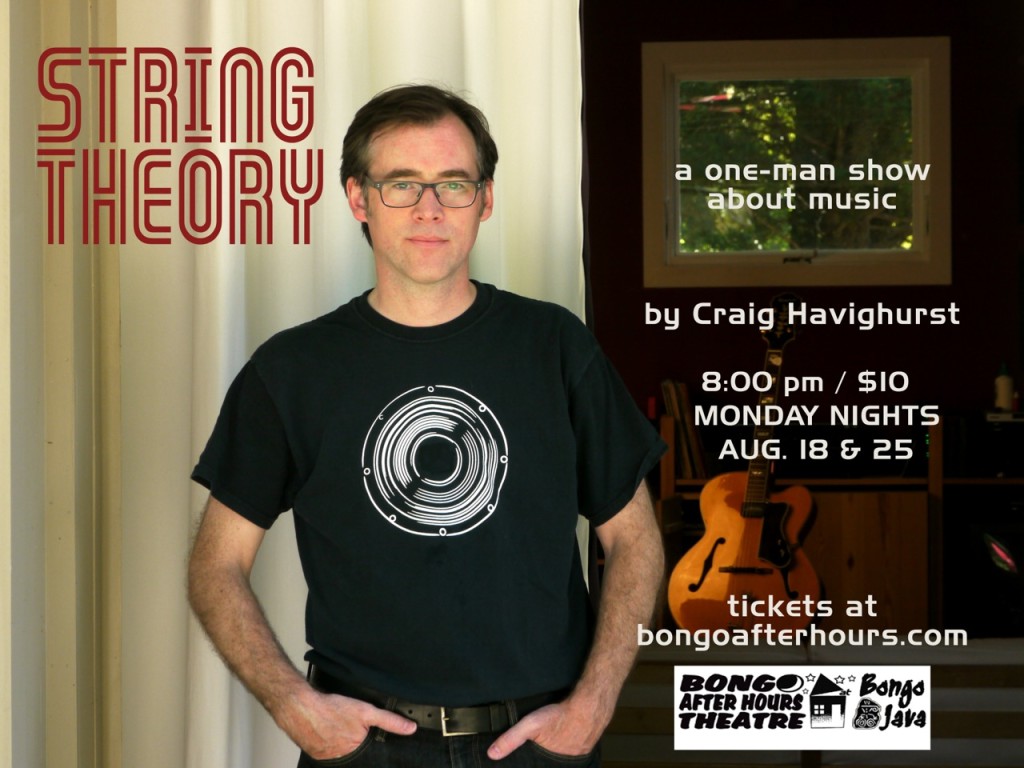 Writer and broadcaster Craig Havighurst revives his one-man show String Theory for a two-Monday run at Bongo After Hours Theatre, 2007 Belmont Ave., on August 18 and 25 at 8 pm. Part spoken word, part public lecture, part performance, String Theory is an experience designed to reframe music and offer people new avenues into new genres and new discoveries. Craig distils lessons from a life as an amateur musician and a professional music journalist and documentarian into a 90-minute, two-act multi-media event. Admission is $10.

Craig Havighurst is an independent journalist and producer in Nashville who has won awards for his work in print, radio and television. He is a regular contributor for WPLN in Nashville and National Public Radio. He is the author of “Air Castle of the South: WSM and the Making of Music City”. His company, String Theory Media, specializes in music documentaries. This 30-minute documentary of The Infamous Stringdusters produced by Craig is an example.

Havighurst has a master’s degree in public policy from the Terry Sanford Institute at Duke University and a B.A. in English from Northwestern University. His background as a writer, reporter, and editor dates back to 1990, when he began his career writing about politics and culture for Durham’s award-winning weekly The Independent and the Duke University daily, The Chronicle.

Between 2000 and 2004, Havighurst was a staff writer covering music and the music business for The Tennessean, where he was the recipient of the 2004 Charlie Lamb Award for Excellence in Country Music Journalism. He was the lead writer and researcher on “Hairdos and Heartache: The Women of Country Music” and his short documentary on the history of WSM radio for Nashville Public Television won a regional Emmy Award.  He’s now senior producer and show journalist for Music City Roots: Live From Factory.

String Theory is about getting beyond the problems and pathologies created by the 30-year reign of the musical-industrial complex, with a focus on reclaiming our culture’s connection with the aural arts. In a noisy world overflowing with four-minute songs and endlessly recycled hits from yesteryear, new instrumental music – composed and improvised – is disadvantaged, to say the least. String Theory offers a roadmap to recovery. Havighurst makes a plea for restoring music, in the words of Isaac Stern, as “an active part of natural life.”

The show is also a memoir of a hobbyist musician and a fan of all kinds of music. In String Theory, Havighurst speaks about his exposure to classical and jazz as he came of age in a world increasingly dominated by format radio, music videos and music as fashion/lifestyle accessory. He speaks with passion and insight about the possibility of bringing the musician’s insider knowledge about the game of music to the mainstream. Craig will be joined by bass player Jeremy Darrow for some of the musical pieces.

Craig Havighurst’s String Theory will be on August 18 & 25 at Bongo Java. There is no age limit, the show begins at at 8PM, and tickets are available for $10 at bongoafterhours.com.