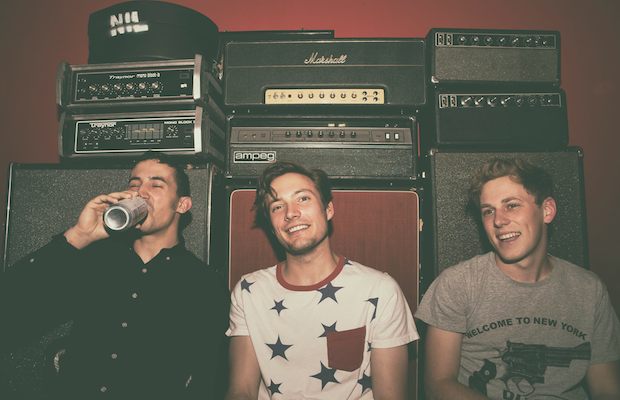 Pure underground rock never ceases to amaze. At a slightly odd show over in The East Room with The Dirty Nil, I’m An Island, Skoolgirl, and Save/Quit, we had a pretty good time learning about some new talent. Check out some of the details after the jump!

For those who have been to The East Room, you will know that it’s tucked back from the street, so if you aren’t actively looking, you very easily might miss it. Unfortunately for me, that was exactly the case. What this meant was that I missed half of the opener, Skoolgirl’s set, but thankfully every band played a 45-minute set, so I was still able to catch quite a bit. Though they may have been riddled with peddleboard problems, they still tried to have a good time and it showed. Cracking jokes while fixing the board and just genuinely having fun went a long way towards making it even more enjoyable.

There are few times in my life that a band, especially one that I’m not a super-fan of, has mesmerized me at a show. However, I’m An Island was able to do that to me. The way that they were able to mix in violin, saxophone, and other instruments in with the typical “rock” instrumentation was phenomenal. While they were much softer and completely different than the other artists playing, it was great to hear this laid back, vibey, psychedelic rock. I’m An Island even debuted a song that they wrote just 3 days before and it sounded just as clean and polished as those they have been performing for a while now. Not only is everyone in I’m An Island a talented musician, but they are a tight band that clearly has put in the effort to feed off of each other musically.

Up next was Canadian rockers, The Dirty Nil, and their potential clearly stood out. It is reminiscent of a cross between early Rise Against and Green Day. Fast and loud with hard hitting guitar and vocals, the Dirty Nil may not be far off from catching a big break. These young Canadians know what they’re going for, and undoubtedly hit the mark when playing their live shows.

The last to play were Save/Quit who also seems to be the most mysterious band of the bunch. When writing a preview for this show, it was impossible to find any type of information about them. They do have a single song that showed an alternative-indie side that, just like with I’m An Island, didn’t seem to fit in with many of the artists on the bill. However, they certainly held their own. I’m sad to say that I was only able to stay for only a portion of their set (Since every band essentially played a full set, it was getting extremely late), but what I heard was more than enjoyable. It’s tough to talk much about a band that has only released one song, but Save/Quit has potential, and everyone should keep an eye and ear out for when they decide to release more.