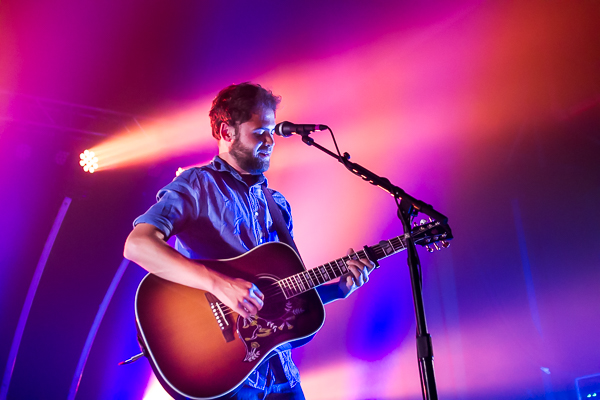 Walking into Marathon Music Works to see Passenger, The Once and Stu Larsen, all thoughts about how we have to be up early the next morning were tossed out the window. Hell, if the show had gone on until 1AM, we would’ve been the last one out the doors after the performance.  The crowd seemed to be in agreement with us; the majority of people were crammed up towards the stage, eager to hear not just the headliner, but to show undying support for the opening groups as well. The energy and passion of those attending were palpable. It had the equivalent of being at a religious service without all of the – well, God stuff. Luckily, Brian Hill was there to capture the moments in photographs, so keep reading to see his amazing photos and to find out more about just how captivating Passenger, The Once and Stu Larsen were.

Stu Larsen took the stage with nothing but a guitar and a soulful voice (well, and clothes, too, but you know what we mean). It’s always nerve-wracking for opening artists, particularly in Music City. Will people ignore his performance? Talk all the way through it and barely clap when he finishes? Stu Larsen need not have worried one bit. Throughout his three-song performance, the crowd listened attentively and didn’t just clap politely – they cheered, encouraged and clearly demonstrated their love for his music (and his Australian accent didn’t hurt, either). The fact that he captured our hearts with just three acoustic jams is a show of what true talent is. 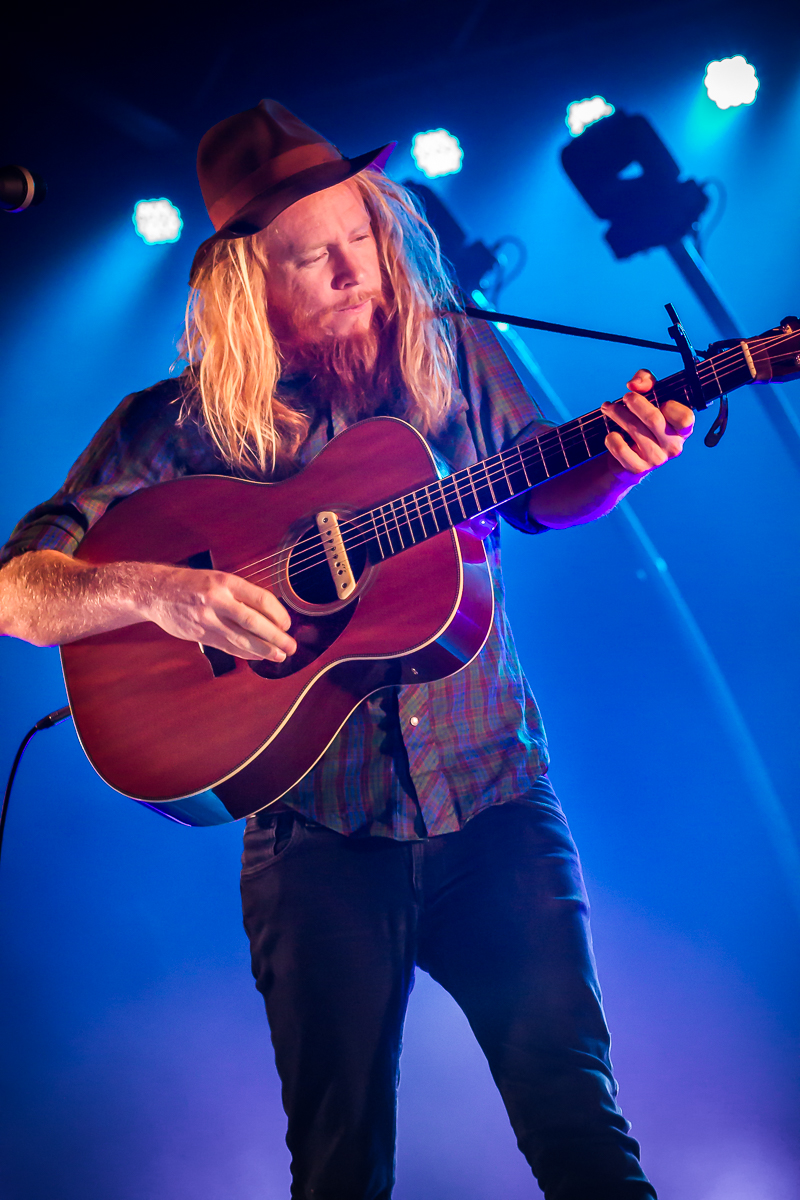 This was promising for when The Once took the stage. The trio out of Canada did not hesitate to crack jokes about their home of Newfoundland, and while their senses of humor certainly led to their act, it’s not what made the performance memorable. After greeting the crowd with a “Ooh, you look good,” Geraldine Hollett, Phil Churchill and Andrew Dale opened their set with a stunning a cappella song that caused silence to settle over the concert goers, and it was from then on that The Once had our attention. Never did the audience lose interest or begin to talk over songs – The Once was just too amazing to miss any part of their show. Mixed within their original songs, the trio did not hesitate to perform some cover songs. “We think it’s illegal to leave Canada and not sing a Queen song,” announced one of them before they launched into “You’re My Best Friend,” which the crowd eagerly danced and sang along to. This was then followed by Elvis Presley’s “I Can’t Help Falling in Love With You.” So now that they had us all in the palms of their hands, they requested that we help them out with a sing along – and the crowd didn’t even hesitate to comply. From the opening a cappella tune to the last song, “We Are All Running,” The Once captured the hearts of all who were present with their brilliantly beautiful harmonies and cheerful on stage presence. 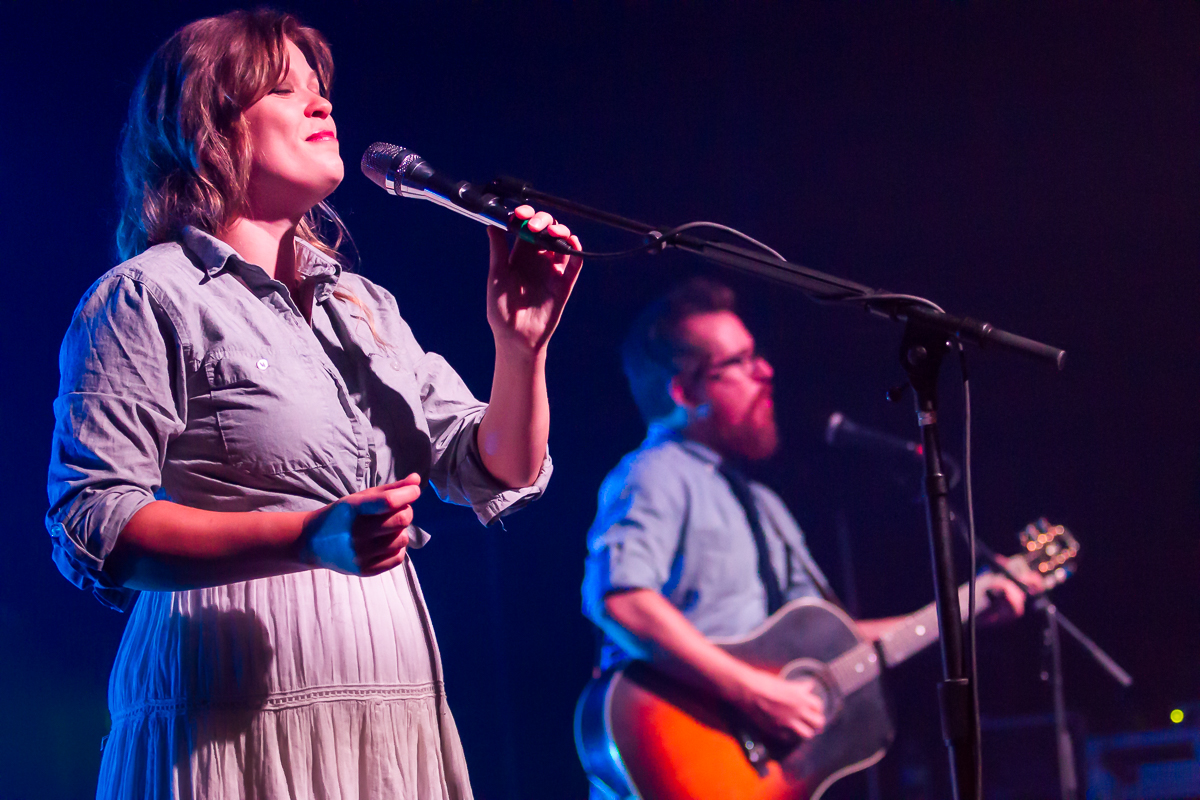 If The Once blew it out of the water, we were all curious to see what sort of splash Passenger would make. Given that the show sold out for the second time shortly after a few tickets were released before the show, there could be no doubt that Passenger would put on an excellent performance. 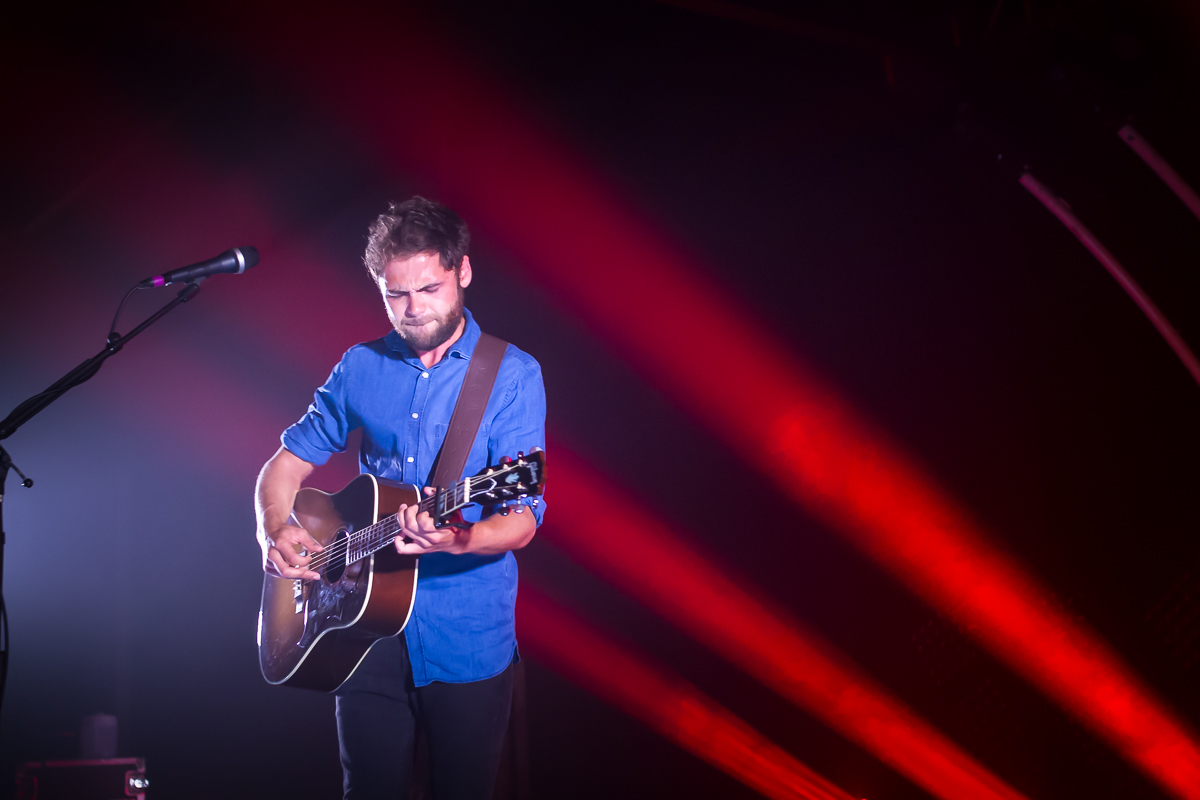 Passenger launched into his first song with shocking red backlighting and a voice so powerful that the crowd seemed hypnotized. Every single word he sang or said we were all hanging onto for dear life, not wanting to miss anything he uttered. Passenger proved to not just be a performer, but to truly, to the core, be an entertainer. Punctuating points of his songs with little offhand comments showed that he wasn’t just reciting what he had recorded in a studio for his latest album. He was there with us all in the moment, enjoying every second just as much as we all were, if not more so. 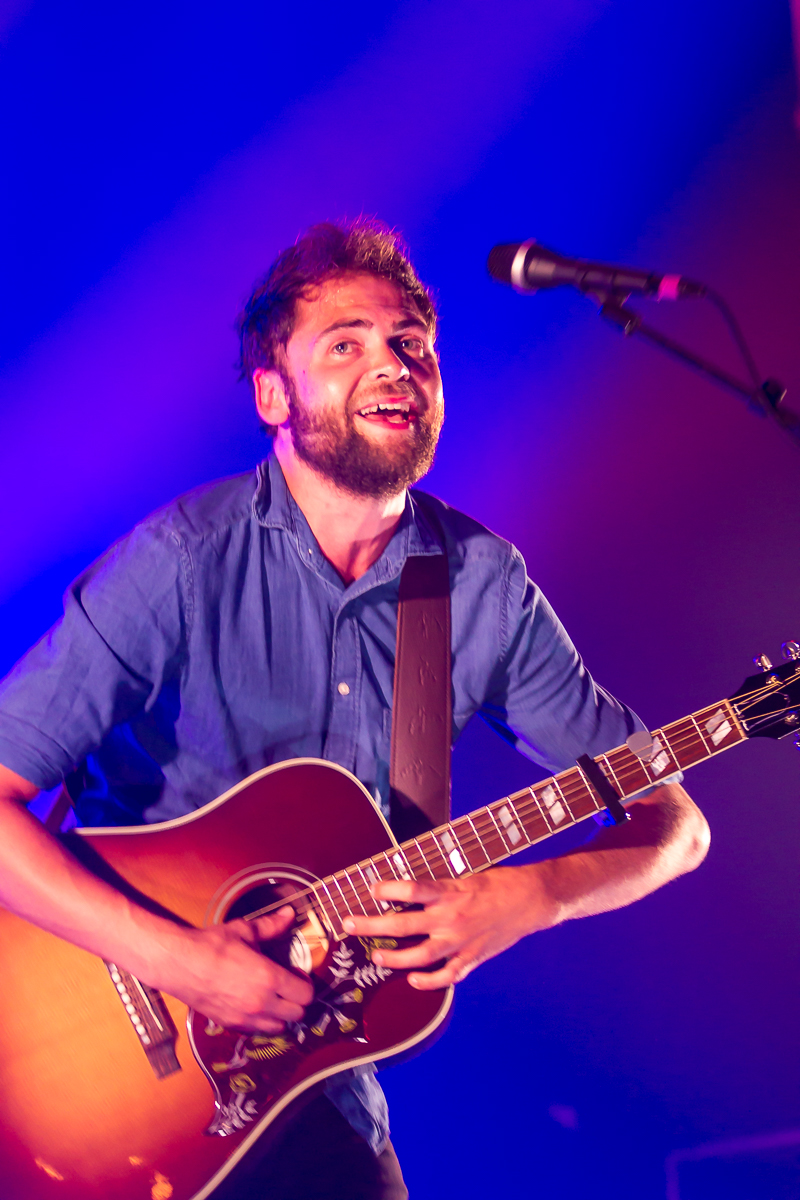 “If you’ve never heard of ‘Passenger,’ I’m sorry because you probably thought we were a band….Nooooo,” he greeted after the first song. “Truth is, I’m such an asshole no one will work with me if I use my real name.” Right off the bat he set the stage for the sort of show it would be, and despite being packed into a room full of enthusiastic strangers, Passenger made us all feel like friends with his witty comments and humorous attitude. He was careful to take every opportunity to make the songs personal, changing some of the places in a couple of his lyrics to Nashville (to many cheers from the crowd), and even taking the time to describe the sad but meaningful story behind one of his songs about living life (much to Passenger’s pleasure, the crowd became so silent you could hear a pin drop during this heartbreaking song of living life when you’re dying young). 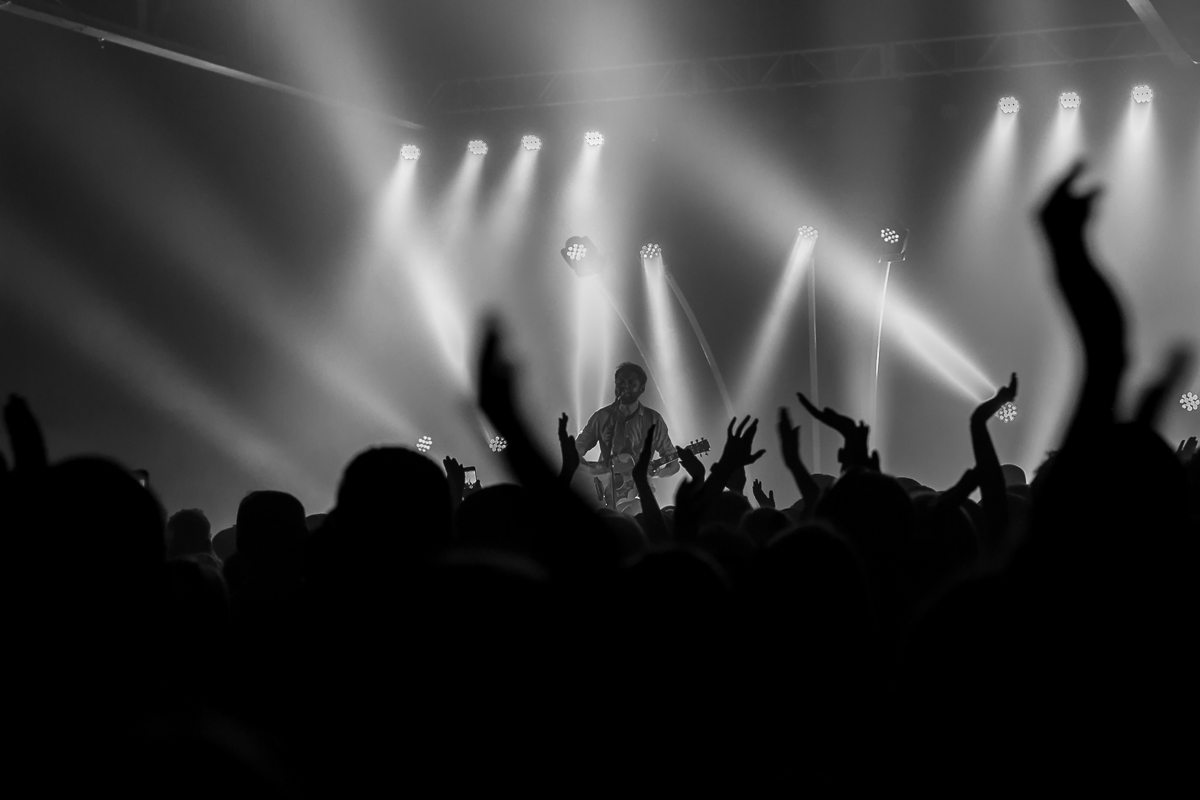 Passenger had such a hold on us that if he had shouted “jump on one foot” no one would have given it a second thought. Every time he did anything, the concert goers cheered as if we were in a competition with a crowd from Bridgestone Arena. He continuously engaged us in a similar manner to The Once by interjecting with short covers of famous Simon & Garfunkel songs or “What is Love?” by Haddaway.

“My album Whispers just came out,” he announced to roaring cheers. “Oh, thank you. I mean, even one bloke sarcastically clapping makes me happy, so thank you.”

“This next song is about stuff that pisses me off.” The crowd enthusiastically sang along (particularly when he requested that instead of sounding like angels, he’d prefer if we all sounded drunk), cheering on the lyrics and thoroughly enjoying every single moment of it.

This was a show that from beginning to end was not just entertaining, but fulfilling and engaging. Each of the artists presented senses of humor and a genuine talent for music that won over those who attended, and given that this is Music City, that is not an easy feat. Needless to say, we’re praying Passenger, The Once and Stu Larsen come back – and when they do, we’ll be the first to buy tickets before they’re sold out.