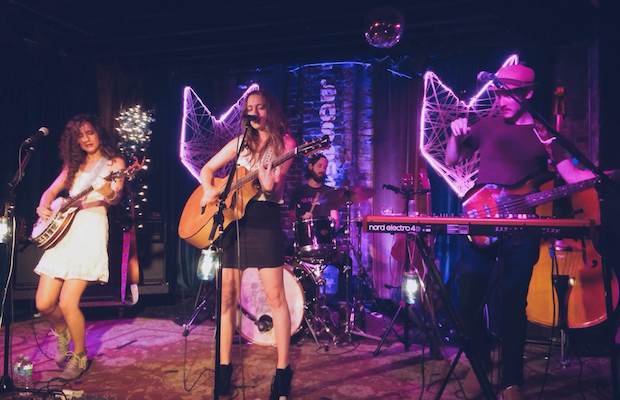 The Vespers. Photo by Larry Kloess.

We thought we had arrived at The Basement early on Monday for The Vespers and Anderson East, but apparently the hometown crowd knew something special might be happening. It wasn’t a release show, but, rather a “Bootleg” show, where they would be playing songs from the as yet unreleased new record with the opportunity to buy a copy. From the parking lot, we could hear The Vespers sound checking…and they were sounding good.

Oh, you want to hear about the actual show? Then check out the details in our review.

Once the doors opened, we saw our favorite spot was “taken” so headed for our second choice near the bar. It may not be the best view, but it has its benefits. The majority of the crowd was around the same age as The Vespers with a few appearing old enough to be their parents which, as it turned out, they were! Anderson East (also a local) did a quick sound check, said hello to a few friends and then started his solo acoustic set armed with guitar and harmonica. His voice has been compared to Otis Redding, Ray LaMontagne, and Ryan Adams. We don’t know about all that, but his thoughtful songs and soulful vocals definitely get your attention whether at a whisper or rocking. It was a loose but engaging set that finished with the title track to his album “Flowers of the Broken Hearted”.

By the time The Vespers took the stage, the house was packed, very warm, and we had upgraded our seat to actually sitting on the bar.

The Vespers are Nashville natives consisting of two brothers, Bruno and Taylor Jones, and two sisters, Callie and Phoebe Cryar. Their sound is the best combination of the brothers’ rocker backgrounds together with sisters’ acoustic, singer-songwriter side. Taylor’s percussion followed by Phoebe’s banjo kicked off their set on “Break the Cycle” which is the opening song from the upcoming CD “Sisters and Brothers”. Next up was a killer cover of Son House’s “Grinnin’ in Your Face” featuring expressive Callie’s vocals and Bruno’s resonator guitar work. After that, they alternated between new songs and ones from their previous CD. Callie and Phoebe took turns on the lead vocals as well as joining together for those unique, sibling harmonies. The energetic show had Callie rapping on the new song “New Kids”, and the crowd joining in on the title track to the new record. They did a quiet unplugged version of “Better Now”, and finished with “Close My Eyes”. All three of their records have been great, but there is just something about their live shows. Do we wish they would have played a little longer? Yes. But it was Monday and some of us had to go to work on Tuesday.