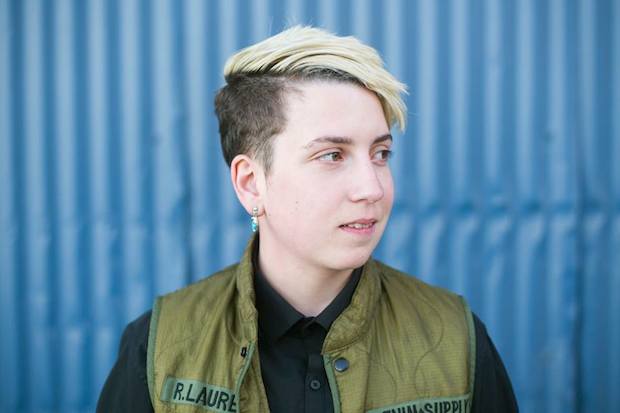 As per usual The East Room put on a wacky and wonderful event Saturday night with some help from the Hong Meow art collective and four very different bands. The punk rockers S E C R E T C L U B are so new they don’t have any material to share just yet, but they kicked off the evening with some 1970s New York punk that turned the East Room into a costumed mosh pit, the weird outfits and wigs provided by Hong Meow. Next, sexy blues trio French Lips gave the crowd a new female singer to simultaneously be in love with and afraid of over wicked slide guitar. The Trinity Schill Kill got people dancing before the headliner, baroque pop singer-songwriter Fauna Halø, kicked off her summer tour with a set of confessional piano ballads.

Brand new punk rockers S E C R E T C L U B opened the night with a set that sounded like it could’ve been played at CBGB’s 40 years ago. The bassist/lead vocalist sounds like a cross between Joey Ramone and Richard Hell, and the trio had a mosh pit of people in weird costumes courtesy of Hong Meow dancing through their set. “Circle KKK,” a song about being in love with a beautiful gas station attendant who’s also a white supremacist, was a highlight and a reference to the Ramones’ “The KKK Took My Baby Away.” We sadly don’t have a media embed for these guys, as they told us they are brand spanking new and are at work on an album but don’t have anything to share online just yet. The only way to find them via the Internet is on Instagram at the handle S_E_C_R_E_T_C_L_U_B.

The sexy trio French Lips play blues slide guitar over goth beats, resulting in music that’s can’t-see-your-hand-in-front-of-your-face dark. Singer Sophie Kadow is like a scarier version of Alison Mosshart, going from a blues growl to a metal scream over the course of a single song. The stomp of her stiletto takes “Machine” from an organ-driven blues slow-burner to a metal thrasher. Guitarist Smokes Acquaro plays a mean slide and proves himself an equally scary vocalist during “I Always Want Her.” East Room owner Ben Jones does double duty switching between drums and bass. If you like the Dead Weather, but think they’re just not dark enough, check out French Lips.

The third act of the evening was electronic duo The Trinity Schrill Kill, who were reminiscent of Chromeo or a dancier MGMT. The lead singer had a surprisingly decent Michael Jackson impression, while his bandmate played guitar and synth. The most danceable act of the night by far.

Finally, baroque pop singer-songwriter Fauna Halø closed out the evening with her Regina Spektor-influenced piano ballads, kicking off a tour of the east coast. Fauna decided to set up her keyboard offstage on the floor to be closer to the audience and lightened the mood of her romantic and frequently melancholy tunes by telling bad jokes in between each song. Fans of Fiona Apple and Regina Spektor will dig Fauna’s confessional style, classical piano chops, and quirky voice.