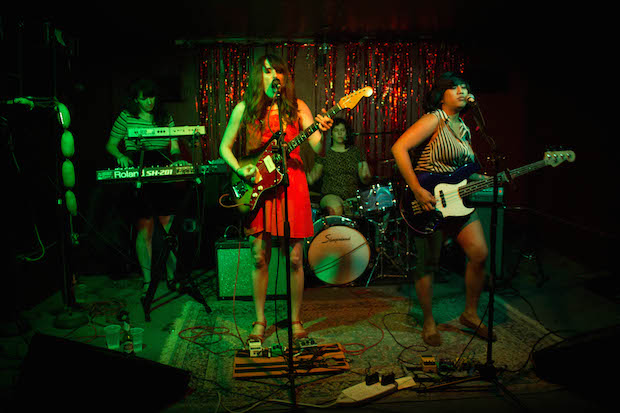 Me Jane (Photo by Ellie Gibson)

So, you think you love dive bars, huh? Can’t get enough grit and grim with your live music? Well if you claim to be a dive diva, like myself, and you haven’t been to the Springwater Supper Club let me just go ahead and let you know you ain’t seen shit. Not too long ago we stopped in on the legendary dive for a Monday night of music mayhem featuring Chicago punksters Me Jane, local trance pop performers Pale Pools and the experimental instrumental rock incarnation of Jungle Fever. Throw some mixing by Las Vegas based DJ Citrin3 and it was a night to remember!

Anytime you’re at Springwater the venue is part of the story, which we’ll get to after the jump, so read on. At the very least, click through the gallery to enjoy new contributing photographer Ellie Gibson’s epic shots. and check in with us next week to make sure you never get a case of the Mondays again, because in Music City there’s no excuse for missing great shows 24-7, 365 if your willing to try.

We got to the venue early, hoping to beat the big storm that was rolling in. It’d been raining on and off all day, but the next cell bee lining it’s way towards middle Tennessee looked much more serious. As we walked in, the familiar dive bar smell of stale beer, musty cigarette smoke, and a faint hint of urine filled our nostrils. Two smallish rooms separated by a wall. A bar and a pool table in the first. A modest stage in the other. Bar paraphernalia littered the walls with inch thick yellow nicotine tar coating everything. Watching the music video, it’s hard to believe the Black Keys, their sound/film crews and about a hundred fans had crammed in here just over a year or so ago. On this night, it looked like a long forgotten watering hole.  The Springwater Supper Club is just as grungy as you’ve heard, and we wouldn’t have it any other way.

There was hardly anyone there yet, so we ordered a couple Jackalope’s off draft, and grabbed a booth. There was a large plastic bucket in the middle of the dance floor collecting drips from where rain water had soaked through a ceiling tile. The sparse sound equipment and monitors on stage looked like they’d seen better days too, and all around us it felt like the place might just rot away to nothing before our very eyes. If left to it’s own devices, it probably would decay into rubble. We’re not really sure you could renovate it even if you wanted to without ruining the aesthetics, so you’ll just have to take as it comes, until it gets bulldozed to make room for condos or something else equally awful.

After some issues with the wall mounted power strip surge protector, DJ Citrin3 soon had her turntables plugged in and ready to spin. She started off with some classic hip-hop tracks like Naughty By Nature’s “OPP” and the 90s one-hit-wonder Skee-Lo’s “I Wish”. A few more people started to shuffle into the room, drawn in by the music like moths to the flame. After a short set, she shut it down for bit so the first band of the night could do their thing.

Pale Pools is a local dream pop duo who self-released a self-titled EP last November that is worth checking out right here. They started their set with almost all the stage lights off and trippy feed back repeating on a loop pedal. While they performed, a projector played an art-school-clip show of random images, colors, or black/white TV static. The drummer played his tom and snare drums standing up facing the vocalist/keyboardist/guitarist. Their songs had chilled out Animal Collective and Radiohead vibes, but they were having a little sound trouble at times. We think part of the problem was the heavy amount of effects, synth and other bells and whistle they wanted to implement were just too much for Springwater’s sound system to handle. Plus the room doesn’t have the best resonance or acoustics, which is a big part of their reverb/resonation sounds.

While Me Jane set up, DJ Citrin3 was back at her ones and twos, this time playing some classic Motown. It was obvious she was more than capable of rocking just about any party. We loved the all-female quartet, Me Jane, right from the beginning. Their spunky, light punk sounds were much more conducive to what Springwater had to offer equipment-wise. The underground sounds seemed to fit the venue perfectly, even if they seemed a little too polished in appearance to be hanging out at such a (lovable) shit hole. They led off with their latest single “Muchos Muchachos”, which we love, and kept the groovy vibes and chill riffs going for the rest of their set. Their debut self-released LP ISON is a must for your summer listening, and you should probably buy it digitally right now!

To close out the night, we stayed for the Tennessee version of Jungle Fever (not to be confused with the NYC hard core band by the same name). They were fast, fast, fast from the start, and we noticed their drumming going into a trance-like state at times as hands furiously moved from one drum head to the next. It was a kind of metal, jam band, instrumental feel that we think could work wonders once they get some more experience and exposure. They were talented, but needed some polish. They seemed like they were winging it a little, which wasn’t bad, but we’ll be curious to see what future performance are like after the get a few more gigs under their belt.

Over-all it was an amazing night of tunes, especially for a Monday, and anytime we can get some Springwater Supper Club in our lives we consider the evening a win. If you ever do go there, just be sure to leave your pretentious or uppity friends at home. If their outfit is worth more than $500 bucks, they probably don’t want it touching anything in the joint, and, honestly if your one of “those people”, Springwater probably wouldn’t want you there anyway.