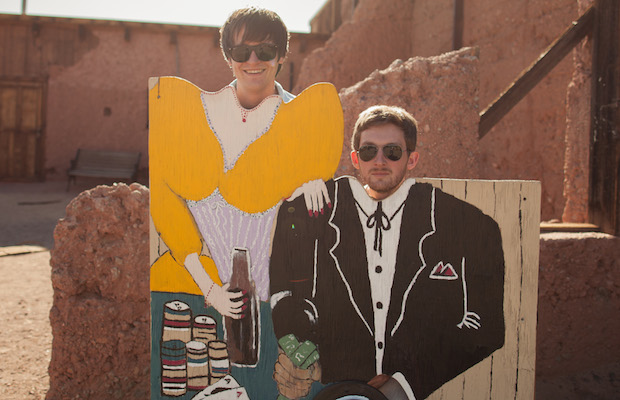 Bear in the Campsite, And the Giraffe, and Moe’s Anthill made for what was probably the most laid­back lineup ever seen at Foobar, one of the east side’s smokiest and loudest of dive bars on Friday night. Bear in the Campsite played a tight set of vintage psychedelic rock after being warmed up by folk-pop duo of best friends And the Giraffe, who pleased the crowd with some familiar covers, and the European banjo­ playing singer-­songwriter Moe’s Anthill. Read on to find out more about the three melodic and danceable acts that graced the Foobar stage on a rainy Friday evening last weekend.

Swiss folkpop singer Moe’s Anthill traveled to Nashville all the way from Europe to learn the banjo and add a country influence to his bizarre style of European folk music. He proved a capable banjo player and acoustic guitarist, and overall came off as a very earnest and sweet guy. If you want to listen to someone, who would probably spend an afternoon helping you get your cat out of a tree or change a flat tire, play acoustic folk about the struggles of life abroad, you should check out Moe’s Anthill.

Moe’s Anthill was followed by folkpop duo of self­ described besties And the Giraffe, who are currently at work on their first full­ length record after putting out a couple EPs and playing shows around the Tennessee area. Nick Roberts and Josh Morris split their time between Gainesville, FL and Nashville before committing to Music City and pursuing And the Giraffe. Their tendency to fiddle with the monitors was distracting, but they pleased the crowd with acoustic covers of Ryan Adams’ “Twin” and Alabama Shakes’ “Hang Loose.” For the majority of the set, the pair played acoustic guitars, only using the synthesizer they had on stage for the final song, which showed more of the electronic influence that’s seen in some of their recorded work.

Psychedelic rockers Bear in the Campsite finished out the evening with a set chock full of tunes that felt vintage 1960s. The five piece consists of two guitarists, a bassist, a drummer, and an organ player that adds a really tasty layer to their sound. The group was tight musically for both their young age and the thin crowd at the venue – they could’ve impressed in front of a bigger audience. If you feel like checking out some danceable psychedelic rock from a band that feels like a throwback to a time when everyone in the group had to be a capable musician, put Bear in the Campsite on your radar.